Year of the Moose : Samuel Asselin not the bad guy anymore

Asselin is excited for a second opportunity to hoist Memorial Cup with his new team
Sep 24, 2018 11:38 AM By: Garreth MacDonald 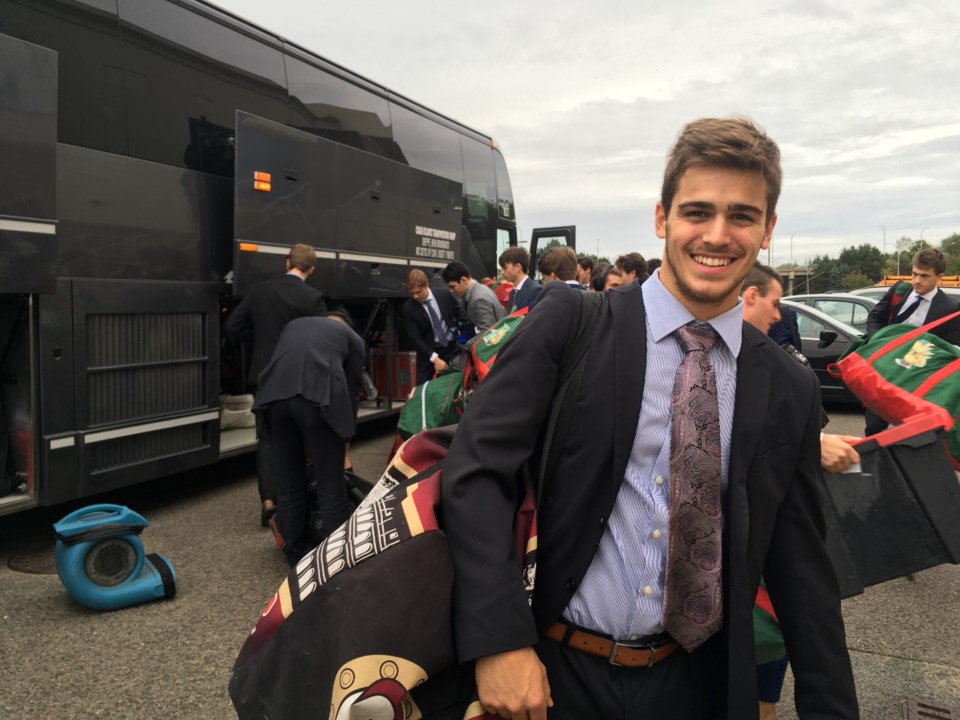 Samuel Asselin in Saint John Friday for his first game as a Halifax Moosehead (Garreth MacDonald/HalifaxToday.ca)

Just after 3 p.m. on Friday, the latest addition to the Halifax Mooseheads roster joined his new club for his first team meal.

One by one, Samuel Asselin walked around the restaurant in Sackville, N.B. — a midway pit stop en route to Harbour Station in Saint John for the first game of the season — stopping to shake the hands of each and every one of his new teammates.

“On the ice, I don’t think these guys liked me very much.”

The native of L’Assomption, Que. pauses for a moment, searching for the proper English translation to complete his thought, and smiles.

“But I’m just a chill guy. I’m pretty fun to be around so I just wanted to [make] a good first impression, shake all their hands, just so they know my face and know that I’m not the bad guy anymore.”

Since his Quebec Major Junior Hockey League debut with the Shawinigan Cataractes in 2014, Asselin has embraced the role of ‘the bad guy.’

He’s a self-described “pest” on the ice, though, that may be putting it mildly.

Upon learning of his acquisition via a trade on Friday, one Mooseheads teammate — thrilled to have Asselin on his side of the puck for a change — employed a much more colourful term to describe his new teammate and how frustrating he can be to play against.

And that’s just the way the former Shawinigan captain likes it.

“I love to be in my opponent’s face,” Asselin said, again with a wide smile.

But there’s more to his game than just getting under the skin of his opponents.

In 179 QMJHL games split between the Cataractes and the Acadie-Bathurst Titan, Asselin had 34 goals and 80 assists. He racked up 11 more points during a 20-game Presidents Cup-winning playoff run with Bathurst last spring, dominating in the faceoff circle with a 57.1% win percentage.

“I can score, I can pass the puck, I think I’ve got pretty good vision but I can always play both sides [of the puck], I can play in my zone.

Mooseheads veteran Joel Bishop, now in his fourth year with Halifax, agrees with that assessment of the 78th overall pick from the 2014 QMJHL Draft.

“I thought it was always tough [to play against him] because he’s such a good two-way guy,” Bishop said after Saturday night’s 3-2 victory over the Islanders in Charlottetown, a game in which Asselin scored the winning goal, his first as a Moosehead.

“When he was out there, you had to be aware. His hands are, I think, pretty dirty. He’s got skill, too.

“I think he’s one of the top two-way forwards in the league.”

Those abilities were on full-display last May when he led the Titan in scoring at the Memorial Cup with five goals in four games, a total that left him tied for the tournament lead with Nick Henry of the Regina Pats.

No goal was bigger than the one he notched with 6:58 remaining in the third period of the championship final to double his team’s lead over the host Pats.

After chipping the puck ahead to Titan captain Jeffrey Truchon-Viel at the Regina blue line, Asselin drove to the front of the Pats net, fighting off the backcheck of Edmonton Oilers prospect Cameron Hebig, to bang home a terrific return feed from Truchon-Viel.

It was an insurance tally that helped seal the Titan victory and deliver junior hockey’s ultimate prize to one of Canada’s smallest junior hockey markets for the first time since 1999.

On Thursday night, Asselin was on the ice at the K.C. Irving Regional Centre with his Bathurst teammates as the 2018 Memorial Cup championship banner was raised ahead of the team’s season opener against Moncton.

The Wildcats spoiled the party, defeating the Titan 3-1.

“He called me into his office and he just told me, ‘You’re going to Halifax, buddy.’”

While he says he’ll miss the fans and his teammates in Bathurst — he loved it there — Asselin is looking forward to getting the opportunity to possibly raise another banner, this time with the hosts of the 2019 tournament.

On Friday morning, Mooseheads general manager Cam Russell pulled the trigger on the trade to acquire the 20-year old centreman, sending 2018 second round pick Cole Larkin, 2018 sixth rounder Yannic Bastarache, and a 2019 second round pick back to Bathurst to complete the deal.

“In this day and age, it’s getting harder and harder to find guys like that,” Russell said shortly after the trade was made official on Friday.

“He’s a bit of a throwback to the old days. He’s a competitor. He’s got the skill, he’s got the grit and character, and he’s got the desire to win. I know it’s no fun to play against those guys.”

The addition of Asselin gives Russell’s Mooseheads three players from last season’s Titan roster. Antoine Morand, a 2017 second round selection of the Anaheim Ducks who led Bathurst in scoring last year, and overager Jordan Maher, a Gander, Nfld. native coming off his most productive QMJHL season, were acquired for a package of draft picks in June.

“We know what it’s like to win the Memorial Cup,” said Russell, who hoisted the trophy for the first time as the architect of the 2012-13 Mooseheads.

“We know what it’s like to go through those steps and that process, so it’s important to have those three guys in our room and they’re going to help our team tremendously this year."

It seems clear, even at this early stage, that Asselin is ready to get to work.

“So as a 20-year old, I’ll try to do my best to bring a lot of leadership so the guys can see what it takes.