With four games left on the road, Mooseheads are looking forward to their home opener
Oct 19, 2018 12:56 PM By: Garreth MacDonald 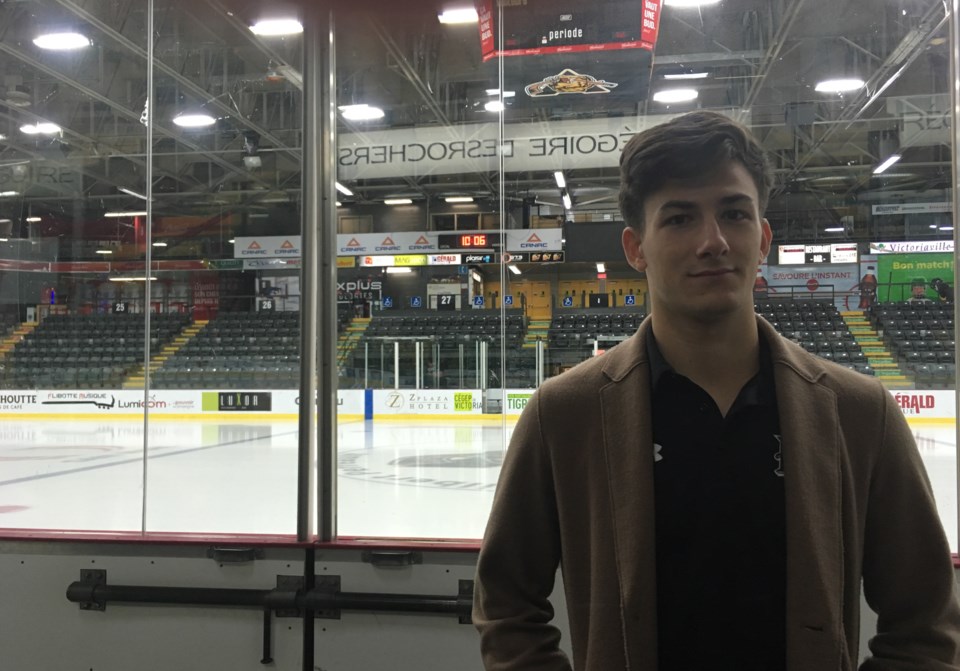 After nearly a month on the road, the Mooseheads can finally see the light of the Scotiabank Centre at the end of this 15-game tunnel.

With four road games left to go before the home opener on October 27, the Mooseheads’ new captain — who has yet to suit at the arena in a Halifax sweater — says the team is looking forward to next weekend’s homecoming.

“It’s exciting, especially for the guys like me that have never played at the Scotiabank Centre,” said Antoine Morand, who was acquired by the Herd in a deal with the Acadie-Bathurst Titan back on June 1.

“It’s going to be special, for sure, but we still have a lot of [work] to do on the road. We’re going to focus on that, but for sure, we’re excited for the home opener.”

Morand and the Mooseheads are 9-2 on the road so far this season and are riding a four-game win streak into this weekend’s three-in-three Quebec road trip.

“It’s exhausting for the body but I think we did a great job to recover properly and, I think it’s good to have a little challenge at the start of the season,” Morand said before Friday’s morning skate in Victoriaville.

“It’s good for the team spirit being on the road [and] good for chemistry. We have a good record so far so we’re just going to keep going like that.”

It has been a busy couple of months for Morand who, along with Halifax teammate Benoit-Olivier Groulx, missed the team’s first two games of the season because he was attending the Anaheim Duck’s rookie and pro camps in September.

Groulx wasn’t the only familiar face for Morand at the California camp. His long-time friend and former minor hockey teammate Max Comtois, who was selected by the Ducks ten picks before him during the second round of the 2017 NHL Entry Draft, was also in attendance.

This weekend is when the pair should have been facing off for the first time during a new Q League campaign, but Comtois, who was dealt by Victoriaville to Drummondville during the offseason, has yet to suit up for the Voltigeurs since being acquired.

With the Ducks battling through injuries to a number of key players including star Corey Perry, the 19-year old winger from Longueuil, Que. has remained with the big club, posting two goals and four assists through his first seven pro games.

“I see what he does behind the scenes,” Morand said on Friday.

“There’s no guy that deserves it more than him. To see him in the NHL right now, it’s very special for me.”

While Comtois is impressing at the NHL level, Morand continues to excel with his new club. He’s tied with New York Islanders prospect Arnaud Durandeau for the team scoring lead with six goals and eight assists and has got on the scoresheet in eight of the nine games he’s played for Halifax so far.

On Wednesday, the Mercier, Que. native was named as the Mooseheads’s new captain.

“When you look back on the history of this organization, it’s an honour to be a part of that and I’m going to try to bring my leadership to this group. I think we have a very strong group and we need leadership, for sure, to win a championship so that’s what I’m going to bring to the table this year.”

So far, he’s doing just that.

The Mooseheads take on Victoriaville tonight in the first game of their three-in-three Quebec road trip.

The Tigres, who are 5-4-0-1 on the season, have an impressive 4-1 home record this year at the Colisée Desjardins.

Victoriaville has won three-straight and is coming off a 6-2 win over the Blainville-Boisbriand Armada on Sunday.

Simon Lafrance, who has a team-leading 13 points, scored twice in the win to give himself 10 goals on the season. The 20-year old Victoriaville captain is tied with Baie-Comeau’s Yaroslav Alexeyev for the league lead in goals.

Halifax’s Raphael Lavoie, who notched a hat trick last Thursday in an 8-2 win over Charlottetown, has nine goals through 10 games this year.

Like Lafrance, Egor Serdyuk also found the back of the net twice in Sunday’s win. The 31st overall pick from June's CHL Import Draft has five points in his last two games for the Tigres and will be a player to watch for tonight.

Tristan Côté-Cazenave (5-3-0-1, .923 SV%, 2.52 GAA), an invitee to the Pittsburgh Penguins’ rookie camp in September, made 28 saves in the victory. He has handled the lion’s share of the workload for the Tigres between the pipes so far.

Next up, the Mooseheads are off to Sherbrooke for a Saturday afternoon date with the Phoenix at the Palais des Sports Léopold-Drolet.

On Thursday night, Sherbrooke shut out the Acadie-Bathurst Titan 6-0 in front of almost 1900 fans, improving their record to 3-2 record at home this season.

It was Bathurst’s second consecutive shut out loss. Last Sunday, the Mooseheads held them off the scoresheet in a 5-0 win at the K.C. Irving Regional Centre.

With those two goals, the Sherbrooke power play percentage improved to 33.3% on the season, the second-best in the league. Only the Rimouski Oceanic have a better success rate when their team is on the man-advantage.

Benjamin Tardif, Sherbrooke's leading scorer who has 12 points in 11 games, scored twice and was named the game's first star.

Another players to watch for on Saturday is Samuel Poulin, the second overall selection from the 2017 QMJHL Entry Draft and a former Midget teammate of Mooseheads' sophomore winger Xavier Parent, who has seven goals on the year including a team-leading three tallies on the PP.

On Sunday, the Mooseheads wrap up their busy Quebec road trip with a matinee meeting in Drummondville with the Voltigeurs.

There are always plenty of familiar faces at the Marcel Dionne Centre when the Mooseheads roll through.

The Voltigeurs are led by former Halifax assistant coach Steve Hartley who recently took over the reigns from Dom Ducharme. Ducharme, who was the Herd’s bench boss from 2011-16, left Drummondville during the offseason to take on a role as an assistant coach with the Montreal Canadiens.

Former Mooseheads captain Ryan Falkenham is also an assistant coach with the club. The 23-year old is in his second season behind the Drummondville bench.

The Voltigeurs sit fourth in the QMJHL standings and are getting plenty of offence from star forward Joe Veleno.

Veleno, the 30th overall pick by the Detroit Red Wings at June’s NHL Entry Draft, has nine goals and eight assists in 10 games this season.

The puck drops at 4 p.m. AST. You can catch the game and every Mooseheads game all season long on NEWS 95.7.