Year of the Moose : After well-deserved week off between games, Mooseheads back in action this weekend

Halifax prepares for a pair of meetings with Val d'Or and Moncton at the Scotiabank Centre
Nov 2, 2018 1:22 PM By: Garreth MacDonald 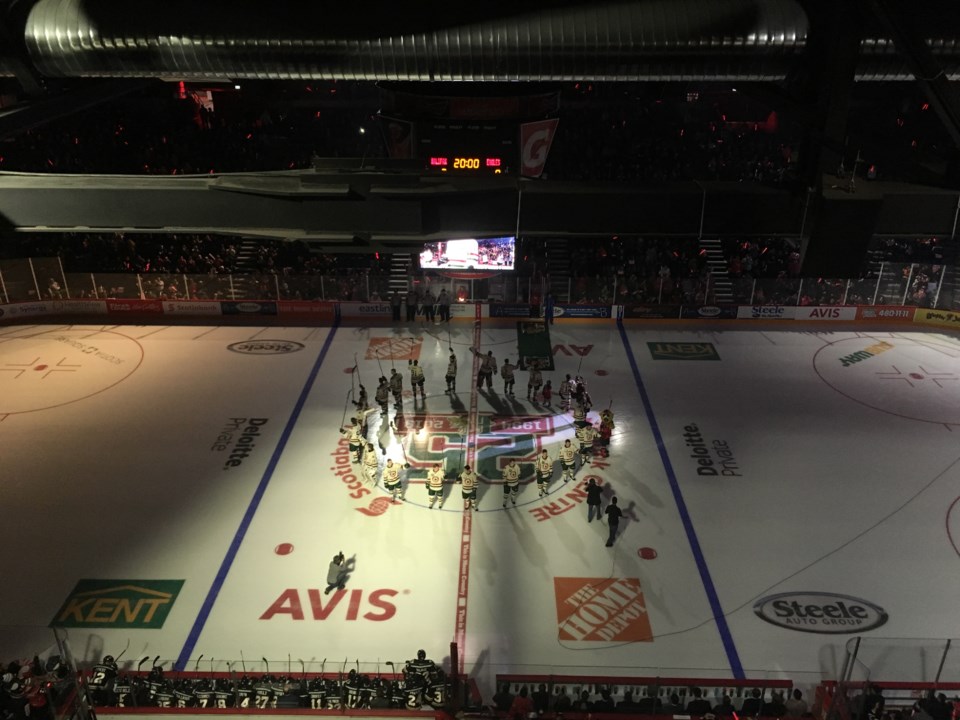 After racking up close to 9,000 kilometres on the road during the first month of the season, the Mooseheads were finally home for a rest this week.

And a few practices, too.

With that epic 15-game road trip to kick off this Memorial Cup season finally behind them, the Mooseheads will look to rebound tomorrow after falling in their home opener.

Halifax's return to the Scotiabank Centre was spoiled last Saturday night by the Cape Breton Screaming Eagles. The Eagles topped the Herd 5-2 in front of 9,949 fans, the most-attended home opener in the team's 25 season history.

After an emotionally-charged pre-game ceremony, defenceman Jared McIsaac promptly got the Mooseheads on the board just 2:53 into the opening period.

But all of that travel -- plus the pomp and circumstance of the evening -- seemed to catch up with the team shortly thereafter as the Eagles potted three goals in just over 10 minutes to take a two goal lead and they never looked back.

The loss snapped the Mooseheads' 10-game winning streak over their provincial rivals and it also gave the Moncton Wildcats an opportunity to pull ahead of them in the standings.

But if things go their way this weekend, the Herd will have a chance to retake first place in the Maritimes Division.

And they'll have the benefit of a regular practice schedule on their side.

The Mooseheads were on the ice at their practice facility at the RBC Centre in Dartmouth on Monday, Tuesday, and Thursday and they will get another practice under their belts this afternoon ahead of tomorrow's game against the Val d'Or Foreurs.

That's a much different situation than the one they found themselves in through their first 15 games on the road when the coaching staff had to make due with morning skates, video sessions, and infrequent practices at home.

But despite that less than ideal situation, Halifax still managed to post a 12-3 record.

"A lot of credit goes to our players," head coach Eric Veilleux said before last Saturday's game against Cape Breton.

"[They were] able to progress and get better as the games went on and we mostly did this by doing some video sessions.

The team could have another big advantage heading into the weekend, too: Ostap Safin, who was very close to returning last Saturday, could make his Scotiabank Centre debut for the Mooseheads tomorrow.

The 19-year old Czech, a 2017 Edmonton Oilers fourth rounder, saw limited action in his first two games with the team after being acquired in late September from the Saint John Sea Dogs.

If he is healthy, the 2017-18 Sea Dogs leading scorer is expected to help round out the Mooseheads' top-six.

Val d'Or wraps up its three-game Maritime road trip on Saturday night at the Scotiabank Centre. It's the first of two meetings of the season between the Mooseheads and the Foreurs.

Alexandre Couture and Yan Dion each picked up their respective fourth goals of the season for the Foreurs in that game.

The Foreurs are back in action tonight at 7 p.m. at the Avenir Centre where they will face the Wildcats.

Defenceman Félix Boivin leads the team in scoring with four goals and 12 assists through the first 17 games this season. But the blue liner also has the worst plus-minus on the club at -22.

Don't look now but the Moncton Wildcats are the hottest team in the Quebec Major Junior Hockey League.

Since losing three of their first five games of the season, the Wildcats have gone 10-0-2-0 through their last 12, banking 22 of a possible 24 points.

Jeremy McKenna, the undrafted 19-year old from Summerside, P.E., has eight points in his last four games and his 11 goals and 18 assists on the season have him second in the Q in scoring behind only Rimouski sophomore phenom Alexis Lafreniere.

The Wildcats, who are coming off a 4-3 win over Cape Breton on Tuesday at Centre 200, host the Foreurs tonight.

Be sure to join us ahead of Dartmouth Dodge Mooseheads Hockey for the Burrito Jax Pre-Game Show. It starts up at 1:30 p.m.

Mooseheads fall 6-3 to Titan in third straight loss
Oct 11, 2020 5:23 PM
Comments
We welcome your feedback and encourage you to share your thoughts. We ask that you be respectful of others and their points of view, refrain from personal attacks and stay on topic. To learn about our commenting policies and how we moderate, please read our Community Guidelines.