There's plenty left to be decided this weekend as the Mooseheads host Saint John and Charlottetown during their final home stand of the regular season
Mar 15, 2019 1:15 PM By: Garreth MacDonald

With just two games left on the QMJHL calendar for the Mooseheads, the playoff picture is murky to say the least.

The Mooseheads wrap up their regular season at home this weekend with a pair of match-ups against rivals from the Maritimes Division.

On Friday night, Halifax hosts Saint John at the Scotiabank Centre while the Charlottetown Islanders roll into town tomorrow afternoon for the season finale.

At this point, the Mooseheads could potentially face five different opponents in Round 1.
Now if the playoffs started today, the Mooseheads would face the Moncton Wildcats in the opening round.

Take a look at the standings courtesy of www.theqmjhl.ca: 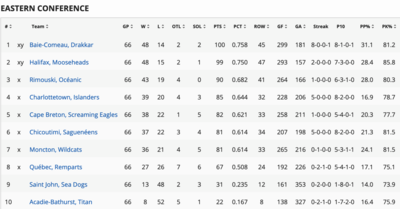 What we know for sure at this point is that:

Halifax comes into the final weekend of the regular season just one point back of Baie-Comeau for first place in the Eastern Conference.

Baie-Comeau wraps up things up at home with a pair of games against Rimouski on Friday and Saturday.

If the Mooseheads are to finish ahead of Baie-Comeau, they will need the Oceanic to hand the Drakkar a loss in regulation, overtime, or a shootout.

If the Drakkar and Mooseheads finish with the same number of point, Halifax will get the top seed as the team would own the first tie-breaker: ROW (more regulation and overtime wins).

If Baie-Comeau wins both games, Halifax will finish second.

And that’s where things get very complicated as we can expect plenty of movement this weekend from the teams currently seeded from fourth to seventh place.

The Cape Breton Screaming Eagles are the least likely first round playoff opponent for the Mooseheads. While they will wrap up the season on the road, the Eagles’ two remaining games are against the Acadie-Bathurst Titan, the Q’s worst team. Furthermore, the Titan have just one win at home this season.

With a huge win over Drummondville on Wednesday, the Chicoutimi Sagueneens have set themselves up nicely for their final two games of the regular season.

The Sagueneens have won 11 of their past 13 and have picked up victories over three of the league’s top five teams during that stretch.

A young, hard-working and skilled team, the club from Chicoutimi appears to be peaking at the right time and will be a formidable first round opponent.

Chicoutimi closes out the season with games against Quebec and Shawinigan this weekend and the team has a very good shot at picking up four points.

The Moncton Wildcats, who are four points back of the Charlottetown Islanders, have a very good opportunity to catch them.

The Wildcats face the Islanders tonight at 7:30 p.m. in Charlottetown in what is likely the most important game of the night.

A win over Charlottetown would leave Moncton two points back with an opportunity to tie them on Saturday when they face the Saint John Sea Dogs, the league’s second worst team.

Moncton has more regulation and overtime wins than Charlottetown and would therefore finish ahead of them.

Should Charlottetown lose to Moncton on Friday night and everything else plays out the way we outlined above (with Chicoutimi, Cape Breton and Moncton winning their final two games), the stage could be set on Saturday for a potential preview of the first round of the playoffs.

A Mooseheads victory over Charlottetown could then result in the Islanders finishing in seventh-place due to ROW (despite a three-way tie with Moncton and Chicoutimi).

It is safe to say that nothing is set in stone this weekend and that every single game will be a big one in the QMJHL.

Join us tonight at 6:30 p.m. for the Burrito Jax Pre-Game Show as we tee-up tonight’s Dartmouth Dodge Mooseheads Hockey match-up as the Mooseheads take on the Sea Dogs.

Don’t forget to stick around after the game for the East Side Mario’s Post-Game Show.