Getson and Trepanier set to make Mooseheads debut this weekend

The recently acquired forwards will suit up for Halifax tonight in Charlottetown
Dec 28, 2018 2:29 PM By: Garreth MacDonald 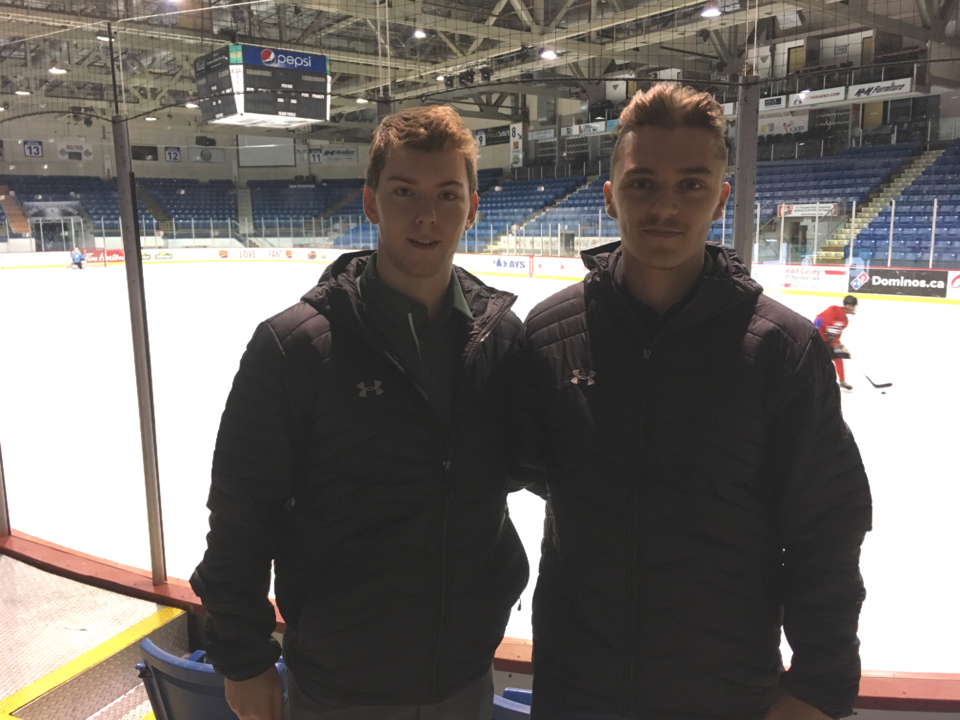 Keith Getson (left) and Maxim Trepanier (right) getting ready for their Mooseheads debut in Charlottetown (Garreth MacDonald for HalifaxToday.ca)

The Mooseheads will have some reinforcements in the lineup when they return from the holiday break this weekend.

Keith Getson and Maxim Trepanier will make their debuts for the Herd tonight in Charlottetown as the Mooseheads face off against the Islanders at 7:30 p.m. on NEWS 95.7.

The Bridgewater, N.S. native, who has 13 goals and 17 assists in 33 games this season with the Islanders, brings a strong two-way game and veteran leadership to the 2019 Memorial Cup host club’s lineup.

“It’s crazy to have this opportunity because not many do,” Getson said.

“Being on the team that you grew up cheering for and they’re hosting the Memorial Cup in your 20-year old season, it doesn’t get any better than that so I’m excited to get going.”

It is fitting, perhaps, that Getson will make his debut against the Islanders, a team he played 286 regular season games for over five seasons.

“It’s kind of a coincidence that my first game is going to be back in Charlottetown and I’m actually happy to get that one out of the way first and get those emotions out of the way.”

Friday’s game in Charlottetown will also be Trepanier’s first as a Mooseheads.

The team picked up Trepanier, who has 17 goals and 16 assists in 29 games this season with the Olympiques, from the airport on Thursday night on the way to Charlottetown.

“I was surprised [to be traded] but I’m very excited to be here with a team that has a chance to win two Cups so I’m very grateful,” Trepanier said before the morning skate on Friday.

Trepanier, a skilled forward who considers himself to be responsible in his own end, played summer hockey with Mooseheads teammates Antoine Morand, Arnaud Durandeau and Jocktan Chainey when he was growing up in Quebec.

While the Mooseheads have added some depth up front, they will be without some veterans on the back end this evening.

Defenceman Jared McIsaac is representing Canada at the World Juniors in B.C. while Jake Ryczek is sick and not travelling with the team.

Jack McGovern, an 18-year old Dartmouth native who was acquired from the Saint John Sea Dogs for a 10th round pick in 2017, has been called up from the Truro Bearcats of the Maritime Hockey League and will make his QMJHL debut tonight.

NOTES: Rookie Samuel Dube, who has played just two games this season due to a blood clot, was on the ice for the morning skate in Charlottetown today.

Cole Stewart, who hasn’t played since Nov. 3 because of an upper-body injury, was also on the ice for Halifax.

The Mooseheads take on the Islanders at 7:30 this evening at the Eastlink Centre in Charlottetown.

Halifax is a perfect 5-0 against the Islanders this season but tonight’s Charlottetown roster will look much different than the one the Mooseheads have faced in recent games.

Jordan Maher, the former Moosehead who was dealt to Charlottetown in the Getson deal, will suit up for the Islanders for the first time.

Noah Laaouan, a former Cape Breton Screaming Eagle, will also make his debut for Charlottetown. The Halifax native was traded to the Islanders in a deal that sent 19-year old forward and Sydney native Derek Gentile to his hometown club.

The Islanders will also be without their top skater in Pierre-Olivier Joseph who was dealt to the Drummondville Voltigeurs yesterday.

Bernard, a fourth round pick of the New Jersey Devils at the 2018 NHL Entry Draft, is serving a one-game suspension and will not be in the Charlottetown lineup.

The Mooseheads picked up a 6-2 win over the Islanders the last time these two clubs faced off before the Christmas break on Dec. 15.

The Battle of Nova Scotia takes on an added layer of significance this weekend as the Mooseheads and Eagles face off in the third annual Hurley Cup.

The trophy was introduced in 2016 by the provincial rivals and named in honour of the Irish field game that was played in the 1800s on the ice in Windsor, N.S., a precursor to hockey.

The winner of the annual home-and-home holiday series is decided by aggregate scoring.

The Eagles captured the trophy in 2016 while the Mooseheads brought it home last year.

The first game will be played at 2 p.m. on Sunday in Sydney and game two is planned for Monday at 2 p.m. in Halifax.

Like the Islanders and the Mooseheads, the Eagles have also been busy during the trade period.

You can listen along to all of the Hurley Cup action live from Centre 200 in Sydney at 2 p.m. on Sunday on NEWS 95.7.