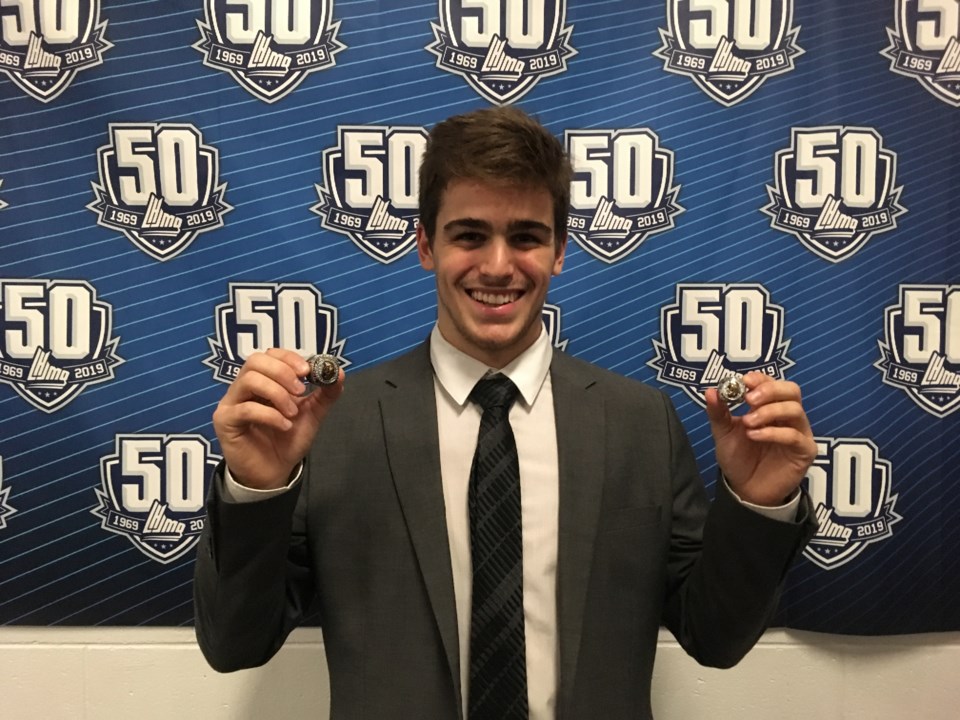 Samuel Asselin poses with the 2018 President's Cup and 2018 Memorial Cup rings he received in Bathurst on Oct. 14, 2018 (Garreth MacDonald/HalifaxToday.ca)

Samuel Asselin brings a lot of qualities to the Halifax Mooseheads.

But since being acquired from the Acadie-Bathurst Titan on September 21, his offensive prowess on the power play has been a welcome surprise to the coaching staff in Halifax.

"But he got a chance one game, he did well and now he's kind of forcing the coach to put him there. That's exactly what coaches want and I think it's a good example for other players as well."

The 20-year old forward from L'Assomption, Que. has 12 goals through his first 19 games with Halifax. Seven of those have come on the power play, a QMJHL best.

That he's leading the league in markers on the man advantage comes as a surprise even to him.

Through his first 177 QMJHL games split between Shawinigan and Bathurst, Asselin had just nine goals on the man advantage.

"I remember when I was younger, one of my coaches in Shawinigan used to tell me, 'Go in front of the net. You'll score goals.'"

That's exactly how his team is finding success right now.

Over the last three games, the Mooseheads have notched six power play goals on 11 opportunities.

"When you shoot the puck, you create opportunities for rebounds and scoring chances," Veilleux said.

"When you try to be fancy, rarely will good things happen."

Benoit-Olivier "Bo" Groulx has four tallies on the man advantage in his last three games. He's now tied for fourth in the league with five power play goals.

The recipe for his success is the same as Asselin's: tipping pucks and sniffing around the front of the net for rebounds.

"There's a price to pay to stay there, to be there, and it's not for everyone," Veilleux said.

Between them, Groulx and Asselin have 12 of their club's 19 power play goals this season.

"Those two are good at it, they want to be there and they're scoring goals right now. It's a good thing we have those two guys."

It's the fourth instalment of the Battle of Nova Scotia this season. The road team has won every game so far with Halifax picking up a 4-2 victory on September 28 and a 4-3 win on October 26.

The Moose will be looking for a little retribution tonight after the Eagles spoiled the team's much anticipated home opener back on October 27.

Cape Breton's 5-2 victory snapped the Herd's 10-game win streak over their provincial rivals that dated back to October 14, 2017.

Halifax thrashed the Titan 8-2 at the K.C. Irving Regional Centre on Wednesday night, their second win in as many games this year against the defending - but very much rebuilding - Memorial Cup champions

For the first time this season, the Mooseheads' top line of Antoine Morand, Raphael Lavoie and Arnaud Durandeau was split up.

Xavier Parent moved up to the left wing while Durandeau dropped back to play alongside Groulx and Jordan Maher.

Durandeau and Groulx each chipped in two goals and a helper in the win while Parent assisted on Morand's eighth marker of the season.

The Titan have been better on the road than they have been at home this year. They're 3-4 on enemy ice and just 1-10-0-1 at the K.C. Irving Regional Centre.

Last week, they split a two-game weekend series with the Eagles at Centre 200 despite getting outshot 98-27.

The Titan will certainly have their work cut out for them again this weekend.

Be sure to join us ahead of our Dartmouth Dodge Mooseheads Hockey broadcast for the Burrito Jax Pre-Game Show. It starts up at 6:30 p.m.

Mooseheads dominate in 10-2 win over Eagles
Oct 24, 2020 9:35 PM
Comments
We welcome your feedback and encourage you to share your thoughts. We ask that you be respectful of others and their points of view, refrain from personal attacks and stay on topic. To learn about our commenting policies and how we moderate, please read our Community Guidelines.