MADRID — The Chinese soccer team that was originally stuck in Spain because of the coronavirus outbreak is going back home to try to avoid its rapid spread in Europe.
Mar 14, 2020 3:47 PM By: Canadian Press 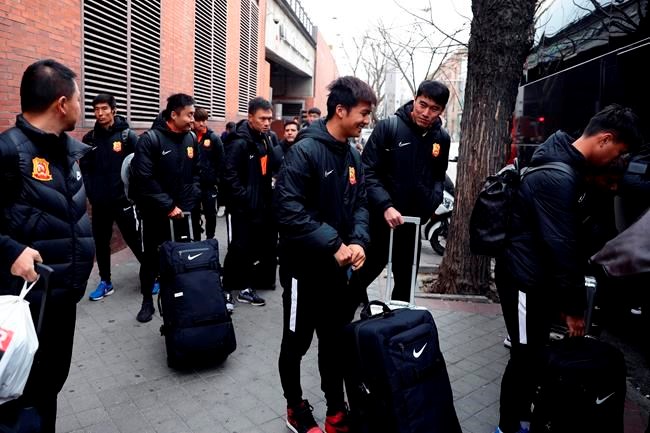 MADRID — The Chinese soccer team that was originally stuck in Spain because of the coronavirus outbreak is going back home to try to avoid its rapid spread in Europe.

Wuhan Zall was expected to return to China on Saturday, nearly 1 1/2 months after it arrived in Spain for preseason training. The team had not been able to leave because of the restrictions in China, but expedited its departure because of the worsening situation in Spain.

The team initially planned to leave Spain mid-February but had extended its stay in the southern region of the country until at least the end of March. That plan changed this week because of the sharp spike in the number of cases in Spain and Europe generally.

“Things are well over there (in China) now,” José González, the team's Spanish coach, told The Associated Press on Saturday. “The Chinese league will likely start at the beginning of May. We will have to enter quarantine when we arrive, so the sooner we leave, the better.”

The team will first go to the city of Shenzhen, where it is expected to finish its preseason training for the Chinese Super League, the country’s main first-division soccer competition. The league was supposed to start on Feb. 22 but was suspended because of the virus.

The city of Wuhan was the epicenter of the outbreak that rapidly spread to other countries and infected more than 145,000 people worldwide, with 5,400 deaths.

Spain was set to follow Italy on Saturday in declaring a nationwide lockdown as European countries took ever more sweeping measures to reduce contact among people and slow the accelerating spread of the coronavirus. Health authorities in Spain said more than 5,700 people were infected and the number of cases could reach 10,000 in the coming days.

For most people, the new coronavirus causes only mild or moderate symptoms, such as fever and cough. For some, especially older adults and people with existing health problems, it can cause more severe illness, including pneumonia. The vast majority of people recover.

The number of new cases have dwindled in China, where more than 65,000 people recovered from the virus. The nation has been easing up on lockdown measures in its hardest-hit region that included the city of Wuhan.

None of the Wuhan Zall players were infected when the team arrived in Spain, but the grandmother of one player was among the coronavirus-linked deaths back home.

Players have been away from home for several months because the team began its preseason in the Chinese city of Guanghzou, nearly 1,000 (620 miles) away from Wuhan.

Although the team was far away from the initial outbreak, Spanish health authorities had to come out publicly to say there was no reason for local citizens to be concerned about the squad’s arrival in January. Three players arrived from China later and had to stay in quarantine and be tested for the virus before joining the rest of the group.

California moves to end sales of new gas-powered cars
Sep 23, 2020 5:18 PM
Comments
We welcome your feedback and encourage you to share your thoughts. We ask that you be respectful of others and their points of view, refrain from personal attacks and stay on topic. To learn about our commenting policies and how we moderate, please read our Community Guidelines.