New York City’s ambitious attempt to be among the first big cities to bring students back into classrooms closed by the coronavirus suffered another setback Thursday, as the mayor announced he was delaying the start of in-person instruction for most
Sep 17, 2020 3:37 PM By: Canadian Press 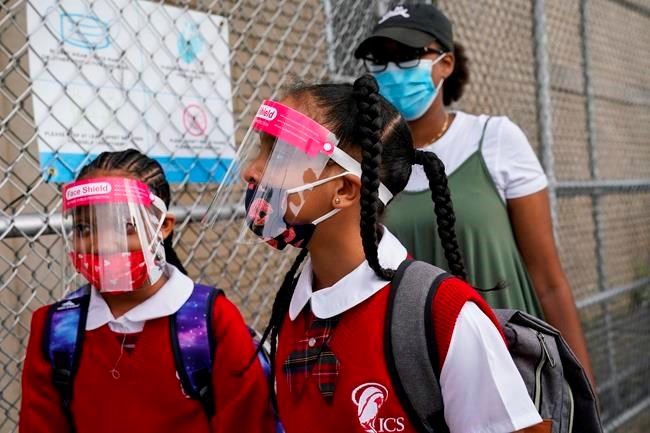 New York City’s ambitious attempt to be among the first big cities to bring students back into classrooms closed by the coronavirus suffered another setback Thursday, as the mayor announced he was delaying the start of in-person instruction for most students due to a shortage of staff and supplies.

Mayor Bill de Blasio announced a new timeline that will keep most elementary school students out of physical classrooms until at least Sept. 29. Middle and high school students will learn remotely through at least Oct. 1.

“We are doing this to make sure all of the standards we set can be achieved,” de Blasio said.

The latest delay came just days before students across the nation's largest school district were set to resume in-person instruction Monday. Now, only pre-kindergarten students and some other special education students will be going back into physical classrooms next week.

The mayor announced the decision to delay alongside union leaders, who had sounded alarms in recent days that schools weren’t ready to reopen.

United Federation of Teachers President Michael Mulgrew said it wouldn’t have been safe to open all the school sites next week.

“If we are going to do this, we must make sure that we get this right,” he said. “We want our school systems up, running and safe and we want to keep it up running and safe, because that’s what the families, the children of this city deserve.”

The city's reopening plan, which has now been delayed twice since it was announced in July, is for the majority of the more than 1 million public school students to be in the classroom one to three days a week and learning remotely the rest of the time. Public school students began an online orientation Wednesday with full-time instruction beginning Monday.

Reaction to the latest delay was a mixture of frustration, concern and relief.

The announcement exasperated parents like Dori Kleinman, who said the hiatus from in-person learning is affecting the development of her fourth- and eighth-grade children.

Daniel Leviatin, a fourth-grade teacher and school librarian at Public School 59 in the Bronx, questioned what an additional eight days would change.

“It’s not good enough because they’re still just kicking the can down the road,” he said, adding that he believed reopening dates should be determined by school or , not dictated citywide.

New York City schools shut down in March when the pandemic hit and students went to all online instruction. School officials distributed more than 300,000 tablets and laptops so that children who lacked such devices could connect to their virtual classrooms, but gaps persisted and online attendance was low.

It was partly because of the difficulty in reaching all of the city's children remotely that de Blasio has insisted on opening schools in person this fall even as other big city school districts across the nation started the school year with online-only instruction.

But opening the massive system of more than 17,000 schools has proved a daunting challenge.

Earlier this month, de Blasio delayed the initial Sept. 10 start of school to avoid a teacher strike and give schools more time to obtain personal protective equipment. At the time, de Blasio insisted there would be no need for further delays.

The unions had pressed for more staff as well as additional protective equipment and other supplies to protect against the coronavirus. De Blasio promised Thursday to hire 2,500 more teachers in addition to the 2,000 additional teachers he had previously announced.

“Our folks have been telling us, the teachers and the school leaders and all of the folks that are working in the schools have been letting us know that right now, currently, they are understaffed, they need some other items,” said Mark Cannizzaro, the head of the Council of School Supervisors and Administrators.

As of this week, about 42% of families have opted for remote-only instruction.

Omeisha Snape, who was among the parents choosing all-remote learning for her children, said Thursday’s news reinforced a sense that she and her husband had made a wise choice.

“I am extremely happy my husband and I agreed to keep our children home,” Snape, who lives in Queens, said. “This way, they are all on the same page and aren’t missing out on schoolwork.”

Snape, who has six school-age children, said she had her husband, Norman, wanted to avoid potential problems if the children, who have asthma, dropped their masks at school. But also, “You don’t know who your kids are going to be around, and who’s bringing home what," she said.

For Christine Gibson, who chose an all-remote learning plan for her two kids who attend Queens public schools, she describes the current situation as a “lost year.” She says the last-minute changes and ever-changing protocols make a bad situation worse for parents, students and teachers.

Barrett confirmation rises as issue in Kentucky Senate race
Oct 28, 2020 10:12 PM
Comments
We welcome your feedback and encourage you to share your thoughts. We ask that you be respectful of others and their points of view, refrain from personal attacks and stay on topic. To learn about our commenting policies and how we moderate, please read our Community Guidelines.