BERLIN — Germany's defence minister is apologizing for decades of discrimination against gay servicepeople in the military until a change of policy in 2000.
Sep 17, 2020 5:36 AM By: Canadian Press 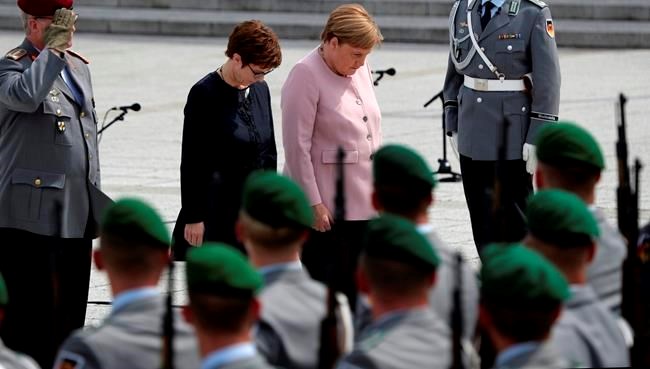 BERLIN — Germany's minister is apologizing for decades of discrimination against gay servicepeople in the military until a change of policy in 2000.

A study commissioned by the ministry and being presented Thursday documented “systematic discrimination” in the Bundeswehr — the military of West Germany and since 1990 of reunited Germany — from 1955 until the beginning of the new millennium.

“I very much regret the practice of discrimination against homosexuals in the Bundeswehr, which stood for the policy of that time,” Minister Annegret Kramp-Karrenbauer said in a statement. “I apologize to those who suffered because of it.”

Kramp-Karrenbauer said she wants to advance legislation to rehabilitate those affected.

The study said that “same-sex orientation was viewed as a security risk in the Bundeswehr until the turn of the millennium and made a career as an officer or noncommissioned officer impossible.”

The study on discrimination in the military is the latest move in Germany to address past anti-gay discrimination. In 2017, parliament voted to annul the convictions of thousands of gay men under a law criminalizing male homosexuality that was enforced enthusiastically in post-World War II West Germany.

The legislation was introduced in the 19th century, toughened under Nazi rule and retained in that form by democratic West Germany, which convicted some 50,000 men between 1949 and 1969. Homosexuality was decriminalized in 1969 but the legislation wasn’t taken off the books entirely until 1994.

Lawmakers approved compensation for men who were convicted. Payments were later extended to people who were put under investigation or taken into investigative custody but not convicted.

A federal court decided in 1970 that homosexuality was no longer a disciplinary for soldiers unless there was a “service connection,” the new study said. That was interpreted strictly to start with and gradually loosened.

The study cited a 1984 letter from the ministry's personnel department which said an officer “who says that he has homosexual tendencies” must be given “an assignment in which is he no longer the immediate superior of predominantly younger soldiers.”

Then- Minister Rudolf Scharping ended official discrimination in 2000 — “after initial hesitation, against the expressed will and persistent resistance of the military leadership of the armed forces,” the study said — after an officer who had been removed from his post as a commander took his case to Germany's highest court.

He issued a paper stating that “homosexuality does not constitute grounds for restrictions in terms of assignment or status and thus also is not a suitability criterion to be examined separately.”