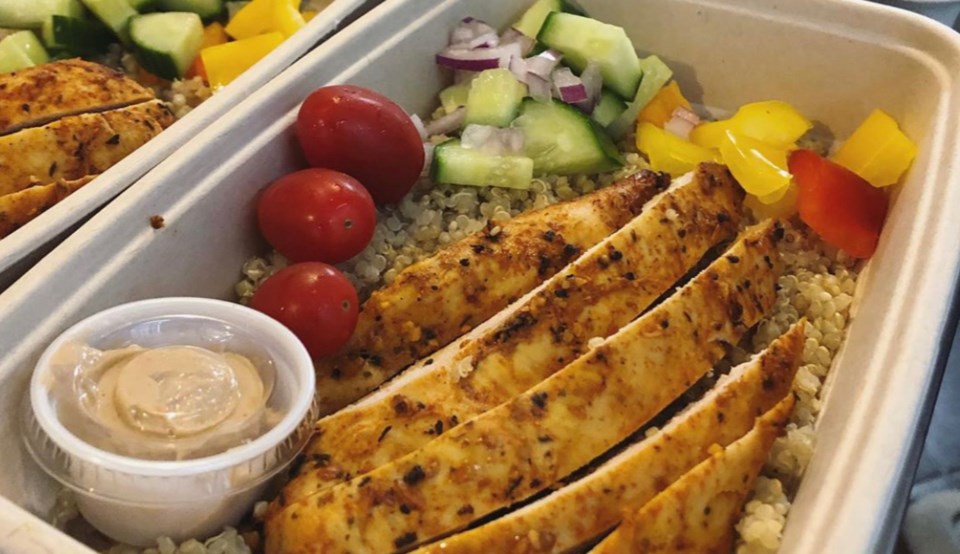 At 24-years-old, Nevell Provo is showing his community how to lead by example.

He has already accomplished much in his young life as a distinguished athlete playing Division 1 basketball for Loyola University and being named captain for Team Canada in Junior Men’s Basketball.

However, with that chapter of his life now come to a close, Provo has just as swiftly created another opportunity for himself as a local entrepreneur.

As co-founder and CEO of Smooth Meal Prep, Provo has helped to build a community-based, family-run meal delivery business that has been thriving since it started as a lark with his mother in 2018.

While still playing basketball, Provo’s mother Karen would prepare home-cooked meals ahead of time for the busy athlete, which enabled Nevell to eat convenient but healthy while at training throughout the week.

“I started sharing the meals on social media and a couple friends wanted to try them and before I knew it, I (had her) doing this for about ten people and charging them,” says Provo.

The business quickly blossomed and expanded through word of mouth. “Two years later, we’ve grown to a team of about 15 employees and done over $400,000 in sales.”

Since its inception, Smooth Meal Prep has served over 10,000 meals to Haligonians, delivering convenient and nutritious meals that are designed to help residents reach fitness goals or maintain a healthy lifestyle.

“We have different meal plans catered to fit and help people reach their goals, whether it’s fat loss, muscle gain, whatever the case is,” says Provo.  “The second thing that sets us apart from Hello Fresh and other meal kits is that ours are already cooked so we call it the ‘heat-it and eat-it’ model — you get the meals delivered to you, you store them in the fridge and when you’re ready to eat, just heat them up and eat.”

But Smooth Meal Prep is also unique from most other meal delivery services in another way: it is local.

“Local is super important. We source pretty much a majority of whatever that we can local so most of our vegetables, our fruits, some of our spices are local,” insists Provo, adding that Smooth Meal Prep has also created 15 jobs for the local community.

“That obviously helps the local economy and we provide jobs to at-risk youth and people that might have had trouble finding a job in the past so there’s a lot of that stuff and again, a lot of those finances and jobs are created right here in our community.”

Provo has been community-minded long before he created Smooth Meal Prep.

Following his passion for sport, he founded the Halifax Metro Top 40 Elite Basketball Camp, a free camp aimed at elite level youth players. Through that, he provides mentoring and support for young athletes, even bringing in NBA stars like Andrew Wiggins and Dillon Brooks for camps. Through such efforts, Provo won the Young Entrepreneur of the Year Award by Family Business Atlantic last year.

He also launched the non-profit Futures Program, an endeavour that “focuses on helping athletes see that they’re more than athletes,” says Provo.

As one of those whose sporting careers is largely behind him, Provo realizes the potential that many athletes don’t see in themselves after their playing days have ended.

“Athletes learn a lot through being athletes so we want to help them pull out those skills to go out and be entrepreneurs or go get jobs,” says Provo. “There’s a lot of team-working, leadership and perseverance that comes with being athletes but helping athletes see that in themselves and use those tools to their advantage is needed.”

Through camps, education and mentorship initiatives, The Futures Program is a unique offering that is just one more way Provo is laying the foundation for entrepreneurial success all the while staying true to his roots and his community.

“It’s been something kind of ingrained through my family and community,” admits the North Preston native.

“The community has always been a big part of my life and your values shine through your business so those same community and local aspects are important pillars in our business as well.”

Birdland Community Garden aims to be accessible to everyone
Apr 13, 2021 1:44 PM