Sidney Leslie Goodwin was only 19 months old when he boarded the ill-fated luxury liner with his parents and five older siblings
Sep 15, 2020 1:44 PM By: Meghan Groff 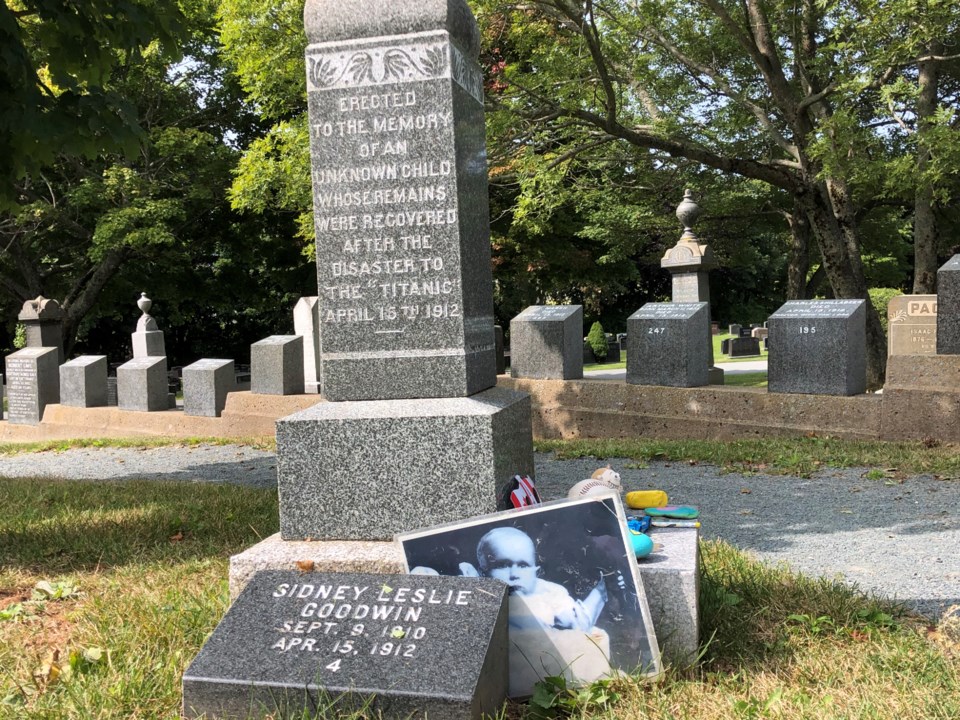 The grave marker of the unknown child. DNA testing has identified him as Sidney Leslie Goodwin. (Meghan Groff/HalifaxToday.ca)

A toddler who died when the Titanic sank and whose identity remained a mystery for almost a century will be the subject of a documentary airing later this month on the Smithsonian Channel.

Sidney Leslie Goodwin was only 19 months old when he boarded the ill-fated luxury liner with his parents and five older siblings.

At 11:40 p.m. on April 14, 1912 the Titanic struck an iceberg while on her maiden voyage from Southampton, England to New York.

The ship sank less than three hours later. The entire Goodwin family was among the over 1,500 people who perished in the disaster.

Only 337 bodies were recovered, 328 by three ships dispatched from Halifax. Goodwin's tiny body was the fourth pulled from the frigid waters by the crew of the Mackay-Bennett, mostly made up of Newfoundland-natives who volunteered for the job.

Local historian and author of Titanic Victims in Halifax Graveyards, Blair Beed said they were touched by the sight of the child who was not wearing a life jacket because there would not have been any small enough to fit him.

"They were moved when they saw this, what would have been looking like just a bundle of clothing floating in the water and it turned out to be this blond hair, blue-eyed boy," Beed told NEWS 95.7's The Rick Howe Show.

Over 200 victims were brought back to Halifax. Some of those were returned to their home communities, but 150 were buried in three local cemeteries. Most of the victims, 121, are in the Fairview Lawn Cemetery, including the toddler whose identity would not be known for decades.

For years, many thought the grave belonged to 2-year-old Gosta Palsson, who was travelling on the Titanic with his mother and three siblings.

"Because buried behind the unknown child is the stone of Alma Paulson, and on it was listed the names and ages of her four children who were lost with her in the sinking," Beed said.

"One of them was Gosta, who was the right age and blond hair, blue-eyed, which matched the description."

In 2001, three graves at the cemetery were exhumed, including that of the unknown child. The first two graves were found to be empty, but researchers were able to recover a small piece of bone and three teeth from the child's grave.

Researchers analyzed the teeth and concluded they likely belonged to a younger child, which led to the unknown child being misidentified as Panula.

"But then they discovered shoes of the unknown child that still existed, taken by the policeman who was in charge of burning the clothing and items of victims to keep them from becoming souvenirs," Beed said.

Clarence Northover couldn't bring himself to destroy the toddler's small pair of brown, leather shoes and kept them in his desk drawer at the police station. His grandson later donated them to the Maritime Museum of the Atlantic.

It was determined the shoes would have been too big for a 13-month-old and that prompted another round of DNA testing which has identified Goodwin as the unknown child.

His story will be featured on the Smithsonian Channel The Curious Life and Death Of… on Monday, Sept. 28 at 10 p.m.

Fundraiser launched to buy headstone for reverend who participated in a daring rescue nearly 150 years ago
Dec 25, 2020 1:44 PM