Not everyone in Halifax was for Confederation during the first Canada Day celebration
Jul 2, 2018 8:17 PM By: David Jones 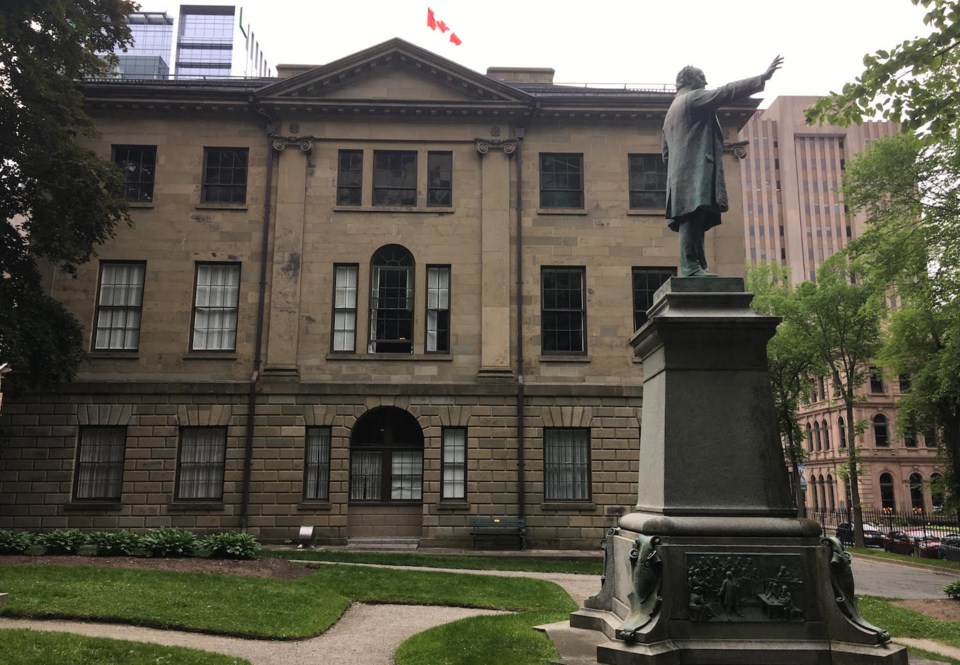 This Canada Day Monday, July 2, 2018, as you perhaps spend time with family, take the time to reflect on our country’s human history, which dates back thousands of years. Here in the Halifax-Dartmouth area, for example, today marks 269 years since the British arrived in Mi’kma’ki (the land of the Mi’kmaq people) at K’jipuktuk to build a fortified town on the western side of the harbour. Although June 21 is commonly cited as the date of the arrival, the modern Gregorian calendar corrects it to July 2, 1749. Keeping July 2 in mind, a newspaper account from 151 years ago offers a fascinating, slightly biased, account of the discord surrounding the first Canada Day festivities. On July 2, 1867, the Morning Chronicle, siding with the Anti-Confederates, reported with great sarcasm on the July 1 ‘celebration’ of Canadian Confederation in the Halifax-Dartmouth area:

The procession, which we may safely call the principal feature of the day's rejoicing, was a good one, that is about six hundred people, including a large number of boys and girls, took part in it, and flags were borne, and bands played, and hats of decided rustiness were waved in the air by those who thus chose to exhibit themselves gratis to the public. About six hundred people -- as many as have occasionally attended a decent funeral in the city – were all that could be scraped up to join in this great display. Six hundred out of a population of more than thirty thousand in the city alone, all of whom, together with the men of Dartmouth, had been invited to attend. And who were the six hundred? Were they in general composed of the thinking portion of this community? Were they the voters upon whom depend the decision to be made here at the elections? They were not.  (Morning Chronicle, July 2, 1867, page 2)

The Morning Chronicle report emphasized the lack of publicly displayed flags throughout Halifax:

“There was not one flag displayed to every 50 houses; there were empty flagstaffs to be seen in all directions; and to show the general disgust of the day and the occasion of its observance, we may instance that in one of the most populous parts of the city – Water street from West's wharf to Dowolf's – a distance of nearly half a mile – but two flags were displayed.”

“The Dominion was inaugurated on Monday, under the most favourable auspices. The day was delightfully fine for outdoor demonstrations – in fact it was real Dominion weather. The greatest enthusiasm was evinced all over the city. The cordiality and enthusiasm evinced exceeded the most sanguine expectations of the friends of Union. Everywhere, with a few exceptions, the day was observed as a Public Holiday. Some few antis, who were of ‘no account,’ kept their shutters down and pretended to do business; but as the day wore on, many got ashamed of their opposition, and ere the torchlight procession moved off, they were found hurrahing vociferously for UNION and the NEW DOMINION!” . . .

“The Volunteer Artillery, shortly before eight o'clock in the morning, fired a salute of nineteen guns, which was replied to by the Naval Brigade on the Dartmouth side. Churches in the city were thrown open for Divine Service. The National Anthem was sung in all the churches. The Union Jack floated from all the public buildings, and from all the leading business houses. It was a grand gala day. Flags were suspended across the principal thoroughfares, and mottoes and devices appropriate to the occasion were distributed all over the city.” . . .

The Unionist, and Halifax Journal paints the parade as a great success:

“Immediately after the oration the procession formed in under the able management of Mr. J. Shean, the Marshal of the day. All the Trade Unions were represented, with carriages drawn by horses, handsomely mounted, and bearing suitable mottoes; the men were at work at their different avocations, the Blacksmiths, Stonecutters, Masons, Carpenters and Joiners, Tobacco Manufacturers, the Bakers, Biscuit Manufacturers, Ship Carpenters and Caulkers, Iron Founders, Boiler Makers, Stove Founders, Nail Manufacturers. The Bands of the Volunteer Battalion and Union Protection Company, and the Drums and Fifes of the Volunteer Artillery supplied the music on the occasion. They were joined by citizens, Mayor and Corporation, Professional men, members of Local Legislature, the Government, Senators of the Dominion, Cavalcade. The procession, which covered over a mile of ground, marched through the principal streets. They were greeted all along the line by cheers from bystanders, and by waving of handkerchiefs from windows.” . . .

These two versions of the same day (July 1, 1867) in Halifax, illustrate the strong feelings for and against Confederation at the time. It is important that these viewpoints (and many others) can be studied today, to bring perspective to the interpretation of Canada Day as a holiday and anniversary. The Halifax Regional Municipality lacks a proper Civic Museum to tell the stories (whether from 13,000 years ago, 1749, 1867 or 2018) of the people of this community.

David Jones is an archaeologist and historian from Dartmouth, Nova Scotia. David has a weekly 30-minute history segment on The Rick Howe Show, NEWS 95.7.