Remember This? The 20,000 people buried near Pizza Corner

A team led by Saint Mary's University archaeologist Dr. Jonathan Fowler has been mapping the area he refers to as 'The Halifax Necropolis'
0
Jun 3, 2019 3:43 PM By: Meghan Groff 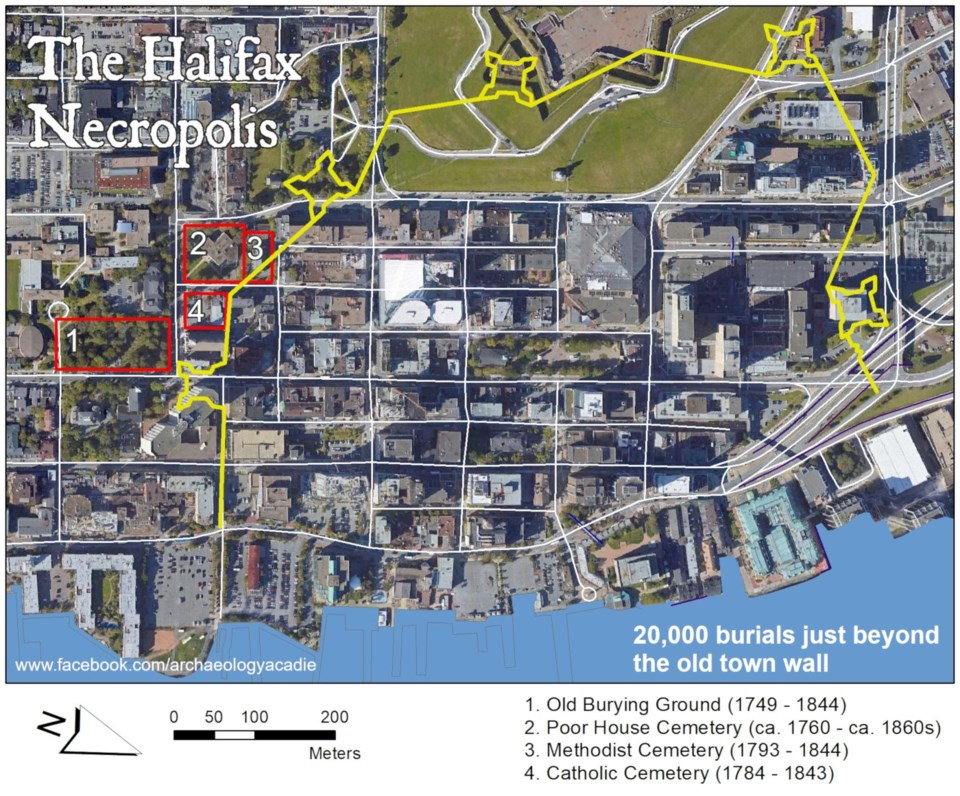 (Map courtesy of Archaeology in Acadie/Facebook)

Next time you're grabbing a donair on your way home from a downtown bar, keep in mind, there are approximately 20,000 people buried in the vicinity of Pizza Corner.

The current location of Halifax's favourite late night/early morning food stop used to be right inside a wooden wall that surrounded the city shortly after its founding in 1749.

A team led by Saint Mary's University archaeologist Dr. Jonathan Fowler has been mapping the area he refers to as "The Halifax Necropolis."

"A mortuary district, that's really what this was ... those townspeople, reasonably enough, they placed their cemeteries just outside the town, what was then the south suburbs, of course now it's the middle of downtown practically," he explained.

There were 5 cemeteries just outside the original Halifax wall, however only one of them is still visible, The Old Burying Ground, and that's where Fowler's project started.

Last year, he was contacted by The Old Burying Ground Foundation, who wanted help investigating the cemetery's grave stones.

It's estimated 12,000 people are buried there, however the graveyard only has around 1,300 visible tombstone markers.

Last October, a group from SMU's anthropology department used non-invasive technology, like ground-penetrating radar, to search for headstones long buried beneath the earth.

"As that process began rolling, we began looking at the broader context of that cemetery historically, and that's where this whole thing started for us," said Fowler.

His team is now poring through a variety of records in from several different sources, attempting to compile all the findable information of those buried in the area, so it can be found in one location.

"We have, for instance, the parish registers of the churches involved, principally St. Paul's, the Anglican church right downtown," he said. "Also we've got St. Mary's Church. The big basilica is a Catholic chuch, and one of the cemeteries in question is under their parking lot at the corner of Spring Garden and Grafton. It's not marked anymore but the bodies are still there."

"Then across the street, we've got another cemetery under the old Memorial Library, and that's the old Poor House cemetery. It's records are quite patchy but the municipal archives have some of that material."

There's also a historic Methodist burial ground at St. David's and a Jewish cemetery in the area.

Fowler's crew is now in the process of building an interactive digital map of The Old Burying Ground, but he'd like to expand the project to the rest of the Halifax Necropolis.

"We're going to be able to embed into that map all the details about the people buried there," he said. "Names, ages, gender, occupation, where they're from and all other details we can find."

"And then we'd like to extend it to this other area nearby, which includes other early members of the town community."

When complete, Fowler said people will be able to easily search through the information and conduct further analysis on the data.

Remember This? Halifax's historic forts (2 photos)
Mar 5, 2018 12:45 PM
Comments
We welcome your feedback and encourage you to share your thoughts on this story. We ask that you be respectful of others and their points of view, refrain from personal attacks and stay on topic. To learn about our commenting policies and how we moderate, please read our Community Guidelines.