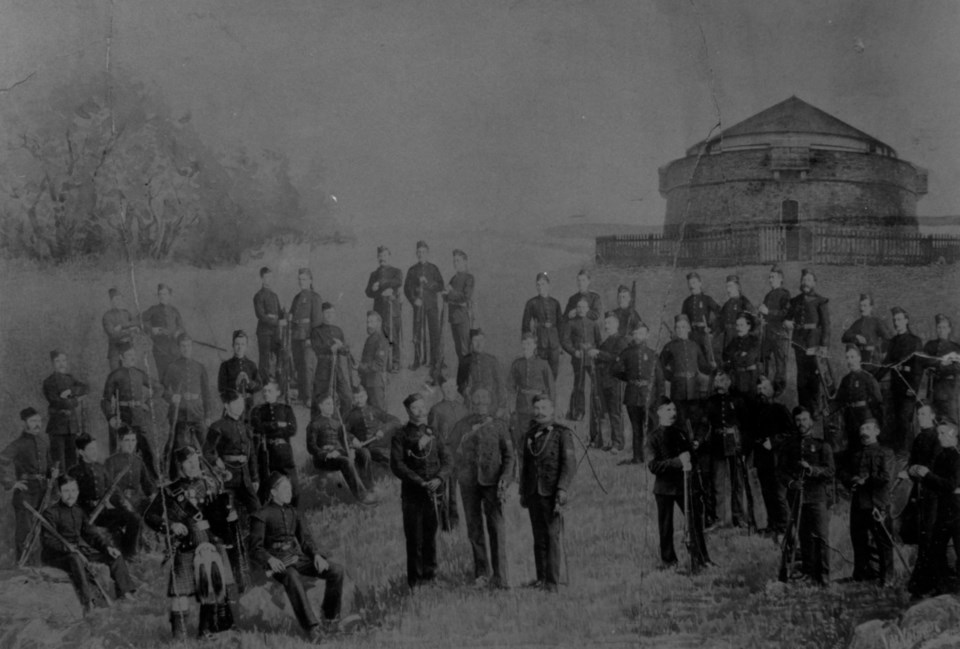 Recently, during a weekly Nova Scotia history and archaeology segment on The Rick Howe Show NEWS 95.7, David Jones discussed some of the history of Point Pleasant Park’s Prince of Wales Tower, with radio host and journalist Rick Howe.

Martello towers are named for Mortella Point, on the French island of Corsica, where the British encountered a robust, round fort.

To protect against a possible French attack on Point Pleasant and Halifax, Prince of Wales Tower was constructed from 1796 to 1798 under the command of Prince Edward, Duke of Kent. Prince Edward was the father of Queen Victoria.

Fort Clarence (underneath the Imperial Oil Dartmouth Refinery/Terminal) and Prince of Wales Tower are named for Prince Edward’s brothers.

Ivan Saunders, author of A History of Martello Towers in the Defence of British North America, 1796-1871, records Prince of Wales Tower as 26 feet in height, 72 feet in diameter, faced with ironstone rubble, removed of armaments after 1875 and designed to “defend the rear of the Point Pleasant batteries and to prevent a landing from the Northwest Arm. After 1864, the tower was used as a self-defensible depot magazine.”

On Prince of Wales Tower and immediate archaeological remnants, ‘A Walk in the Park: Point Pleasant Park after Hurricane Juan’ notes that “ ... the foundation of a small guardhouse still remains in the woods nearby, although it is not clearly visible from the road. Even less conspicuous is the refuse left behind by the tower’s garrison: bottle glass, ceramics, and other artifacts dating from the early- to middle-nineteenth century, which had been concealed by soil and underbrush for 150 years, but identified during remediation work. One surprising find among this debris was a small polished stone axe-head, likely dating back to the Ceramic (or Maritime Woodland) Period, between 2,500 and 500 years ago. This tool was the first and only evidence for a pre- (European) contact Mi’kmaw presence at Point Pleasant.”

On Monday, October 1st, 7:30 p.m., at a free and public monthly lecture series, organized by the Industrial Heritage Nova Scotia, at the Maritime Museum of the Atlantic (1675 Lower Water Street, Halifax), David Jones will be presenting, with the aid of early maps and photographs, an overview of the history and potential archaeology of Fort Clarence (which is buried underneath the Imperial Oil Dartmouth Refinery). The Duke of Clarence Martello Tower will be covered in detail during the presentation.

According to the Parks Canada Prince of Wales National Historic Site webpage, the interior of the tower is not open to the public.

Will this be rectified?

David Jones is an archaeologist and historian from Dartmouth, Nova Scotia. Thursdays at Noon, David has a weekly thirty minute history segment on The Rick Howe Show, NEWS 95.7.