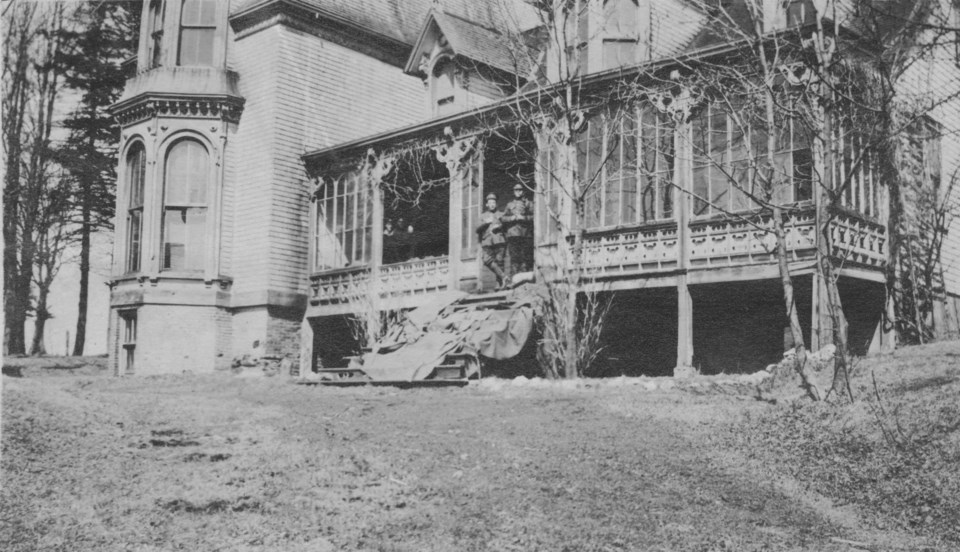 According to Dr. John P. Martin, late Town Historian of Dartmouth, on page 49 of his The Story of Dartmouth, today’s residential Joffre Street was once the location of 19th century poet Andrew Shiels’ Manor Hill farm: “Property sales in 1827 included 50 acres of land purchased by Andrew Shiels from Captain Thomas Maynard, an executor of the Creighton estate. Part of the old Shiels’ farm is now Eastmount section. On the level hill-top 150 yards north of the corner of Portland, at No. 11 Joffree Street, Andrew Shiels built a large manor-house which stood as a lofty and secluded landmark over a century. Much of his poetry was written there.”

According to page 159, a local newspaper of January 1829 reported “that on the 20th day of that month, George Ormiston ploughed one-half acre of land at the Maynard farm of Andrew Shiels”.

Before further exploring Manor Hill farm and the life of Andrew Shiels, it is worth noting some Dartmouth-related Creighton history.

The area from Dartmouth Cove, near today’s Hazelhurst Street and Old Ferry Road, up to Maynard Lake was long associated with the Creighton family.

According to page 21 of The Story of Dartmouth:

“Of all the estates the oldest is thought to have been at the northwest corner of Pleasant Street and Old Ferry Road. Here stood ‘Brooklands,’ on property granted as far back as 1773 to James Creighton. This is the same man who, as lad of 16, came to Halifax with Cornwallis’ first settlers. His son of the same name was born in 1762, and probably came to Dartmouth in later life to build Brooklands, for by 1800 he was the proprietor of Creighton’s of the Lower Ferry ... The original Creighton grant spread nearly one-third of a square mile back from the shore. It must have taken in the land around Maynard’s Lake, because the latter is named after Captain Thomas Maynard of the Royal Navy, a son-in-law of the elder Creighton. The outlet from the lake poured down through the hollow of Brooklands to enter the Cove at the present Hazelhurst railway trestle. The height of the tidewater there, will give an idea how far the sea ran in to form the original shore line. Old residents used to say that sea-trout and smelts came in there, and wiggled their way up the brook to Maynard’s Lake. This stream is shown on a sketch of the harbor drawn in 1749.”

Andrew Shiels’ Dictionary of Canadian Biography entry, written by Phyllis Blakeley, describes Andrew Shiels as a ‘blacksmith, poet and magistrate’ who was born in 1793 in Roxburghshire, Scotland and died at Dartmouth in 1879; “After emigrating to Nova Scotia in 1818, Andrew Shiels worked as a blacksmith at Halifax. A decade later he moved across the harbour to Dartmouth, where he owned a farm, and continued his trade at Ellenvale Tavern. By 1834 he had set up a carding mill at Ellenvale, named for his wife, Ellen, who died in 1846. Shiels later married Isabella Blair; he was the father of a large family, but most of his children died young.”

“A supporter of Joseph Howe, Andrew Shiels was appointed a justice of the peace for Halifax County on 20 Nov. 1848 in the commission appointed by the Reformers after the winning of responsible government. In 1857 the Court of Quarter Sessions appointed Andrew Shiels a stipendiary magistrate, and in 1860 he became a member of the commission for the relief of insolvent debtors in Halifax County. Shiels is remembered as a colourful local character who wrapped himself in a long plaid cloak in cold weather, as a man of strong opinions active in the affairs of the community, and as a respected magistrate. At the time of his death the Presbyterian Witness said, ‘He was a fast friend and an implacable enemy.’ During the greater part of his life he belonged to the Presbyterian Church, but after a misunderstanding with members of the local presbytery
he joined the Methodists.”

John Martin, on page 179 of The Story of Dartmouth, writes “the first book by a Dartmouth author appeared in December 1831, when Editor Joseph Howe published a volume of poetry written by Andrew Shiels”.

A frequent contributor to local newspapers, Andrew Shiels often went by the pen name of Albyn. He is buried in Dartmouth’s historic Woodlawn Cemetery.

Written on the back of a WWI-era picture of the Manor Hill farm house, in the photo collection of the Dartmouth Heritage Museum, are historical notes by the late Dr. John Martin.

He records that the house, “built by Andrew Shiels for himself,” was later associated with Jack Hunt. After 1873, into the 1880s, Dartmouth’s first mayor, W. S. Symonds, lived in the house. During the First World War, the home was used to station the “63 rd Rifles” (63 rd Regiment Halifax Rifles).

There are two names on the back which might identify the two soldiers standing on the porch in the photo: Richard A. Moore and Carleton Edwards.

The Story of Dartmouth fills in a few more details of the property.

In 1912; “The Dartmouth Development Company bought up a few properties in downtown Dartmouth. Many others were on the market. Mrs. John Hunt, widow of the iceman, who then occupied Manor Hill, offered the residence, stable, coach house and nearly 40 acres of land, both adjacent and in the vicinity of Oathill Lake” (page 509, The Story of Dartmouth).

Eight years later, in 1920; “At Manor Hill, where Andrew Shiels once wrote poetry, the Eastmount subdivision of S. A. Heisler was selling lots as low as $100. Streets were named for military leaders in World War I” (page 527, The Story of Dartmouth).

Joffre Street, for example, takes the name of Marshal Joseph Joffre, commander of French forces on the Western Front.

Whether along the streets of the old downtown, the shores of the lakes or even in residential subdivisions such as the Joffre Street neighbourhood, Dartmouth is full of history.

David Jones is an archaeologist and historian from Dartmouth, Nova Scotia. Thursdays at Noon, he has a weekly thirty minute history segment on The Rick Howe Show, NEWS 95.7.