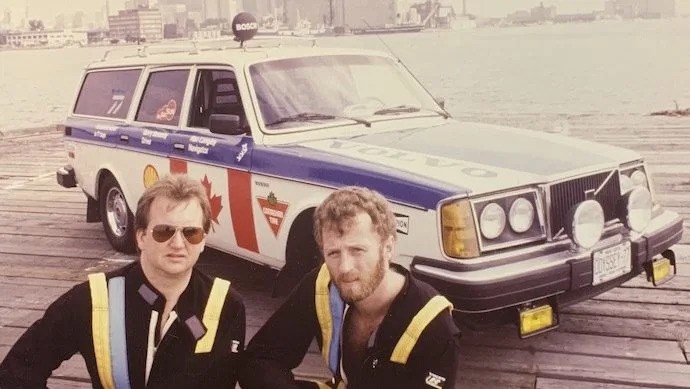 It's been 40 years since Halifax's Garry Sowerby and his friend Ken Langley took the trip of a lifetime, driving around the world in a Volvo and setting a Guinness World Record for fastest circumnavigation of the world by car in the process.

The idea came to the pair on an all-night road trip from Ottawa to Halifax as they tossed around ideas of what they thought would be the ultimate road trip.

"It was one of those defining moments in your life, we came up with this idea to drive around the world and then we thought, 'Gee if nobody has ever done it, we might get a Guinness Record for it,' and then we found out there was a record and we had to beat that," Sowerby told NEWS 95.7's The Rick Howe Show.

The idea kept growing and the two quit their jobs to focus on raising the necessary funds.

On September 6, 1980, the 30-year-olds departed the CN Tower for their ultimate adventure.

"There was no GPS, no internet, no Google Maps, you were on your own," he said. "If you wanted to talk to someone, you found a phone booth and started putting quarters and dimes in it."

They headed west hitting major communities in Canada, before crossing the border and heading south to Los Angeles. There, they boarded a plane to Australia.

"Forty years ago today I was trying to get that Volvo off a Pan Am crater in Sydney, Australia to take on the Australian Outback," Sowerby said Wednesday.

He said that's one of the reasons they chose a Volvo for their adventure.

"The Volvo would just fit on a 747 ... it would fit in the cargo hold, so we could check it as excess baggage," he explained. "That gave us more flexibility for getting it over the oceans."

It also helped that car is available internationally, which means they'd be able to find any parts they needed along the way.

"When I go through all the logbooks, all the notes we made, some of the photos and talk to Ken Langley, it's amazing the memories that come back and the contacts we made,"  he said.

Sowerby is reliving his adventure through a blog on eastcoasttester.com. A new one gets posted every Sunday.