First Red Bridge would be at the modern intersection of Prince Albert Road and Celtic Drive, on the edge of Lake Banook
Jul 24, 2018 12:17 PM By: David Jones 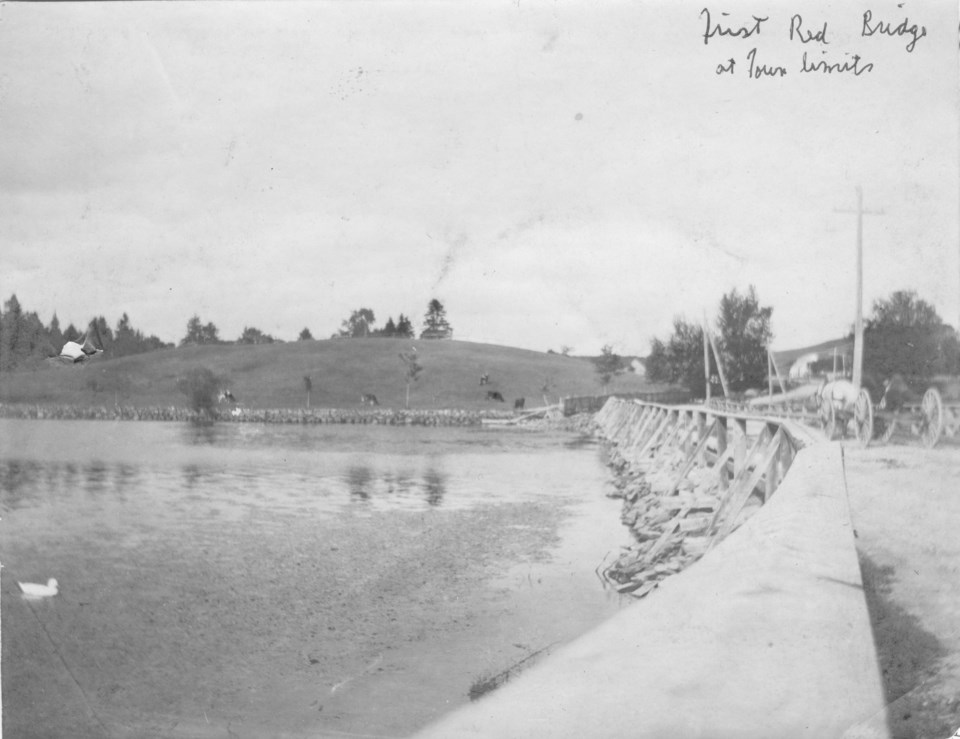 Today’s article focuses on the early history of the area captured in the featured photo from collection of the Dartmouth Heritage Museum.

This is the First Red Bridge near Graham’s Corner at the former town limits of Dartmouth.

First Red Bridge would be at the modern intersection of Prince Albert Road and Celtic Drive, on the edge of Lake Banook.

Dr. John Martin, late Town Historian of Dartmouth, addresses the origins of First Red Bridge on page 100 of The Story of Dartmouth: “The cause-way bridge over Carter’s Pond at the town limits, was very likely built during the time of the Maroons, for the road is shown on military maps as early as 1808, indicating that this section of highway had been constructed some years previously. From the vermillion color of the protective wooden railing, this crossing was long known as ‘First Red Bridge’ to distinguish it from ‘Second Red Bridge’ with similarly colored railing, built about 1826 across the bay of Lake Mic-Mac near Miller’s Mountain.”

“This photo taken in 1904 by Town Councillor Thomas G. Stevens shows 'First Red Bridge’ situated at the Town limits looking east towards Graham’s Corner. John R. Graham’s slaughter-house shown on page 493 is the whitish building on the right. The cows grazing are in the pasture of George Walker of 36 Main Street, who with his son Harry, ran a milk route to Dartmouth. As mentioned on page 97 this was part of the 230 acres of Crown Land grant to Christian Bartlin. In the mid-1920s Pius Otto filled in the shore near the stone wall, and erected a large icehouse. It was taken over by MacCullochs Ltd. in the early 1950s. Lakeview Point Road was cut through there during World War II when Harry Walker divided the field into building lots. ‘Glenwood’ is behind the tree on the extreme right. All the reddish bank of clay near the Dundas Garage and up Celtic Drive at the right of the photo shows definite evidence of glacial origin. Farrell’s Pond, or Carter’s Pond, on the east of Celtic Drive, was a favorite skating surface. It is now filled in and levelled.”

Bartlin Road, off of Prince Albert Road and behind Alderney Elementary (located on Penhorn Drive), is named for Christian Bartlin (who came to Dartmouth in the 1750s and later settled near Lake Banook) and his family.

According to John Martin on page 97 of The Story of Dartmouth, “the well-known Walker families of Dartmouth” are the descendants of Christian Bartlin.

Glenwood Avenue, also off of Prince Albert Road, is named for the ‘Gleenwood’ house mentioned by John Martin on page 426 of The Story of Dartmouth: “. . . in 1888 John T. Walker built ‘Glenwood’ on the former Bell property (now 22 Main Street), for Warden James Simmonds. In the same neighborhood John R. Graham, the Dartmouth butcher, built the house on what was once part of Christian Bartlin’s grant (page 140), and is now the Creelman property at No. 5 Braemar Drive. A Halifax newspaper’s comment in describing the location of these new dwellings said that ‘they are on the sites which some 25 years ago were occupied by the wigwams of MicMacs.’”

The two nearest lakes to the Graham’s Corner area, Banook and Micmac, have a human history that goes back thousands of years.

According to John Martin, on page 276 of The Story of Dartmouth; “The scene from Mount Pleasant was described as being very beautiful with the cottages on the opposite hills, and the rows of wigwams along the side of Silver’s Hill from the present MicMac Club to Graham’s cross roads. There was another encampment at ‘Second Red Bridge’. Other records state that there were also camps in the vicinity of Pleasant Street, near Erskine.”

On pages 286, he shares information on local Mi’kmaq campsites on the edge of Lake Banook:

“In June 1845, the Acadian Recorder printed a lengthy account of a visit made to the Indian camps, already described as being seen from Mr. Crichton’s house at “The Brae”. The encampment was ‘on the facing side of two rising grounds, and the intermediate valley between had its occasional rude domicile. In one wigwam, men were preparing wicker work for their baskets. In another, women were busy plying the porcupine quills
which, in various and gorgeous dyes, they were fashioning into fanciful and graceful figures . . . As we sauntered through the brush, we heard the sound of a familiar vesper chant proceeding from a wigwam on the summit of a neighboring hill ...'”

“The hills which afforded shelter from winds and also furnished streams of fresh water, especially those near the various bays of Lakes Banook and MicMac would be the most favorable camp sites. Hooganinny Cove, at the termination of Sinclair Street, and Carter’s Pond at the Town limits, which were haunts of the early Indians, should be photographed by this generation, because they may be all filled in before many years. There were Indian camps at the junction of no. 7 and 18 highways until about the 1880’s. At Second Red Bridge, the last of them disappeared about 1900” (page 287).

Hooganinny Cove, according to John Martin, was a Mi’kmaw name.

John Martin, although using now unacceptable language, was clearly concerned with recording Mi’kmaq history and archaeology in the mid-20th century.

The area around Graham’s Corner and what was once First Red Bridge below Silver’s Hill has a special place in the story of our community and should be taken care for future generations.

David Jones is an archaeologist and historian from Dartmouth, Nova Scotia. Thursdays at Noon, he has a weekly thirty minute history segment on The Rick Howe Show, NEWS 95.7. David grew up paddling and playing hockey on Dartmouth's beautiful and historic Lake Banook.

Trending in Remember This