Remember This? Daylighting Punmakati: The story of Dartmouth’s Sawmill River

In the Mi’kmaw language, the Sawmill River is known as Punmakati which means Frost Fish Brook
Mar 19, 2018 12:45 PM By: David Jones 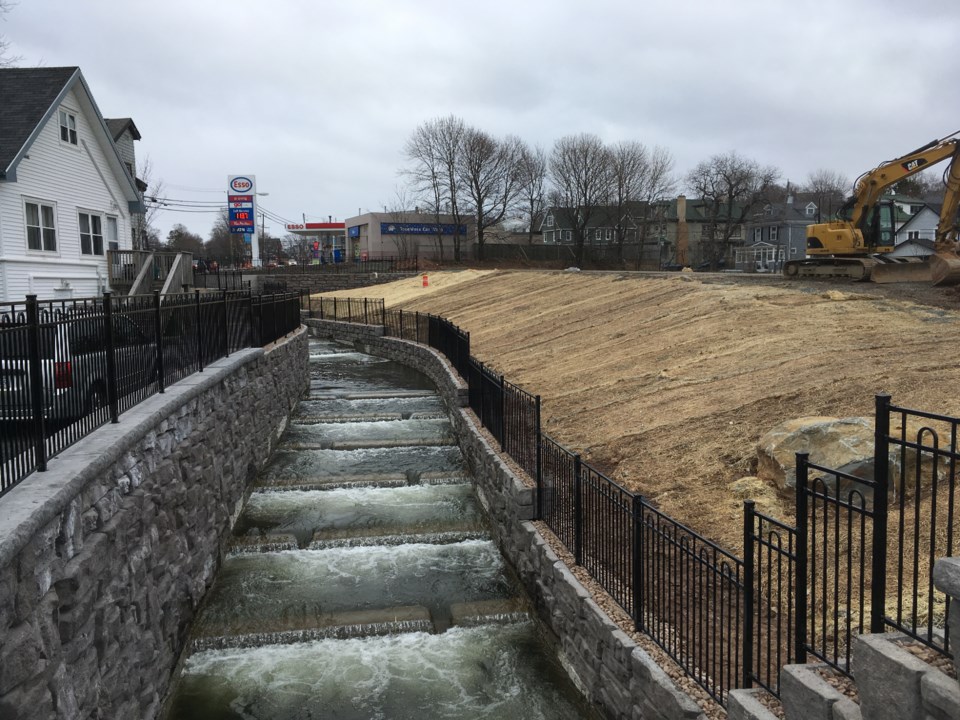 Dartmouth's Sawmill River now sees the light of day at the former site of the Starr Manufacturing plant. (David Jones for HalifaxToday.ca)

"How many large centers in Nova Scotia are enriched, as we are, with a natural river flowing through the heart of the town? This might be better impressed on us if a miniature waterfall, or a spouting fountain, could be set up in the stream below the Starr Works. As it is, the precious waters waste themselves into the sea" (Dr. John P. Martin, Story of Dartmouth, page 10).

Inspired by Major Ezekiel Gilman’s sawmill that was meant to provide boards for the construction of early Halifax, Sawmill River was first named as such on a 1749 map of Halifax Harbour by Moses Harris.

Gilman’s sawmill, which changed hands several times, was built at the mouth of an important and prehistoric watercourse that was home to the local Mi’kmaq.

Major Gilman, who fought at Louisbourg and was from Exeter, New Hampshire, built a blockhouse, the first of several in what would become Dartmouth, next to his sawmill.

In the Mi’kmaw language, the Sawmill River is known as Punmakati which means Frost Fish Brook. Frost Fish are also known as Tomcod (Microgadus tomcod).

Although commonly considered the ‘highways’ of the Mi’kmaq, rivers such as the Sawmill and the Shubenacadie should be thought of as more than just early transportation routes; these waterways were sources of a variety of resources and, more importantly, areas of significant settlement.

Dartmouth Cove (and the rest of the eastern side of the Harbour), the Sawmill River and the Dartmouth Lakes (such as Banook and Micmac) were home to a number of pre-Contact Mi’kmaq encampments.

The highly threatened archaeology that represents these occupations should be taken into serious consideration when preparing for ground disturbances in the greater Downtown Dartmouth area (and, of course, throughout the Halifax Regional Municipality).

Built over two phases in the mid-19th century, the Shubenacadie Canal linked Halifax Harbour with the Bay of Fundy’s Minas Basin.

Dartmouth was the centre of canal-related activity and, today, there are many legacies of the Shubenacadie Canal apparent in this city, such as the old locks and cellars of Shubie Park and the stone channel markers of Sullivan’s Pond (and Sullivan’s Pond itself which was created as a holding pond in the first phase of canal construction).

Although harnessed over the centuries for mills, the Shubenacadie Canal and, very importantly, to run the turbine of the world famous Starr Manufacturing factory, the Sawmill River ran relatively free through Downtown Dartmouth until the fateful flooding associated with Hurricane Beth in August of 1971.

To accommodate the Canadian Canoe Championships, held for the first time on Lake Banook, water levels were raised, causing a deadly cocktail which lead to the failing of historic canal and modern City of Dartmouth infrastructure.

Subsequently, the Sawmill River, in the fashion of 1970’s engineering, was banished underground in a culvert that ran from Sullivan’s Pond to Dartmouth Cove.

In the last few years, a particular movement, the daylighting of underground rivers, has been gaining significant strength among environmentally and community minded people in Halifax and Dartmouth.

Strongly encouraged by groups such as the Ecology Action Centre and the Sackville Rivers Association and actively supported by politicians such as Councillor Sam Austin, the Sawmill River is now, through the work of government departments such as Halifax Water and Fisheries and Oceans, seeing the light of day and flowing a little more freely through Downtown Dartmouth.

Phase one of the project has seen the opening up of portions of the Starr site and the Cenotaph area of Sullivan’s Pond. Soon, a variety of fish species will be able to travel from the Harbour to the Dartmouth Lakes, with the help of a variety of engineered systems.

Phase two of the daylighting of the Sawmill River will involve a great deal of change closer to Dartmouth Cove.

Dr. John Martin, Town Historian of Dartmouth, over half a century ago, spoke of the need to better highlight the beautiful waters of the Sawmill River (particularly with waterfalls and fountains) which were, in his opinion, wasting to sea.

Since the 1970s, those same waters were wasting underground. Finally, through daylighting, his vision is starting to come to fruition, little piece by little piece.

David Jones is an archaeologist and historian from Dartmouth, Nova Scotia. Thursdays at Noon, David Jones has a weekly thirty minute history segment on The Rick Howe Show, NEWS 95.7.