According to Dartmouth lawyer and historian Martin Jones, 'there is no doubt that the first fully documented game of ice hockey was played on Dartmouth’s Oathill Lake in 1867'
Mar 12, 2018 12:45 PM By: David Jones 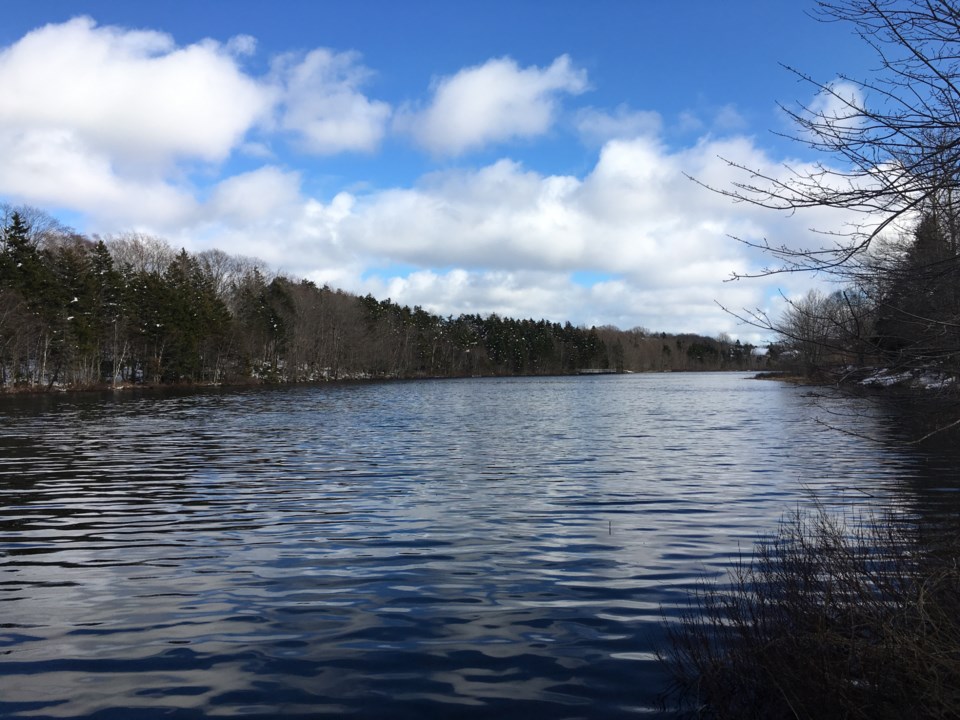 Dartmouth’s Oathill Lake was home to the first fully recorded hockey game in history, on February 18 , 1867. (David Jones for HalifaxToday.ca)

Sandwiched between the modern-day Dartmouth neighbourhoods of Manor Park and Silver’s Hill, Oathill Lake has long been a favourite location of skaters and hockey players.

On Saturday, February 18, 1867, 1,500 people from Dartmouth and Halifax, frustrated that the ice on Lake Banook was not in good condition, marched to Oathill Lake, witnessing what was about to become the first known fully documented ice hockey game in history.

According to the next day’s issue of The Halifax Reporter; “Two well contested games of ‘ricket’ were being played. At the upper end were a number of young men from Dartmouth and the City, playing their ‘hurleys’ and ‘following up’ the ball, while the centre was occupied by a number of officers of the Garrison and fleet, in a match game called hockey i.e. ricket.”

Hockey had been played for quite some time in Dartmouth, considering that, “Very little science was displayed in either game, the old class of players seem to have died out, and their successors are not up in the science of leading off the ball, doubling and carrying it through.”

Martin Jones is a Dartmouth lawyer and historian. He is the author of the National best-selling Hockey’s Home: Halifax-Dartmouth: the Origin of Canada’s Game.

According to Martin Jones, “based on all available evidence to date, and I’m not talking about fictional works and signs on the side of the road, there is no doubt that the first fully documented game of ice hockey was played on Dartmouth’s Oathill Lake in 1867. Although earlier hockey games were played on Lake Banook, the Oathill match is very significant because of the newspaper report documenting two teams who obviously kept score."

“Some mistakenly suggest that hockey did not exist until it was played indoors in Montreal in 1875 (using ‘Halifax Rules’ and Dartmouth Starr skates). Anyone who has played hockey outdoors describes it as their best hockey experiences, something confirmed by NHL players and the thousands of fans watching Winter Classics; looks like ice hockey to me!”

The Montreal game, which took place eight years after Oathill, was organized by James Creighton from Halifax and played with Dartmouth equipment and modified Halifax rules.

Dartmouth’s world famous Starr Manufacturing Company produced millions of pairs of skates and sold hockey sticks that were first made in the Dartmouth area by Mi’kmaq craftspeople. The Halifax Reporter mentions that many of the Oathill Lake patrons were wearing Starr Acme skates. Starr played an intricate role in the development and popularization of skating and ice hockey.

The eyewitness report, referring to the two military teams says that “… the exclusives had to abandon their game and retire from the field with their ‘hot porter’ apparatus, which had been well patronized during the day.”

Combined with a band playing along the shoreline, the players and spectators enjoyed a festive afternoon. The only thing missing was Don Cherry in one of his colourful suits.

“Hopefully, this historic match can be recreated on Oathill Lake, with players representing the Army and Navy,” says Jones.

To mark the February 18, 1867 hockey game, interpretive signage should be installed along the beautiful Oathill Lake walking trail.

Remember This? Halifax's historic forts (2 photos)
Mar 5, 2018 12:45 PM
Comments
We welcome your feedback and encourage you to share your thoughts. We ask that you be respectful of others and their points of view, refrain from personal attacks and stay on topic. To learn about our commenting policies and how we moderate, please read our Community Guidelines.