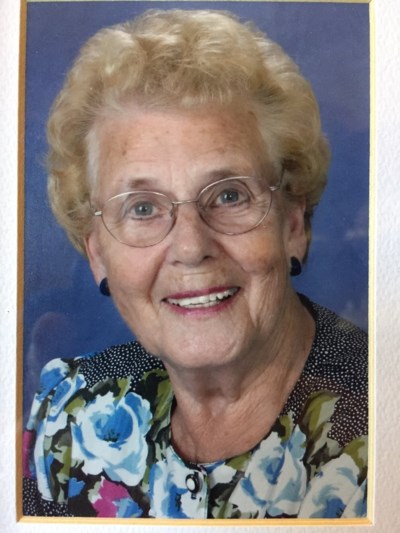 Age 97 of Halifax passed away on October 11 at Northwood, Halifax, N.S. She was the daughter of the late Wesley Owen and Carrie Irene (Sproule) Kaulback of Liverpool. She graduated High School in Liverpool, where she played Girls Basketball, winning the championship in 1939. After High school she married Gilbert Davy and moved to Ontario. She then moved back to Liverpool with her two daughters where she lived with her husband Jack Skipper, who passed away in 1983.

She worked at various retail stores in Liverpool and had a passion for sewing and knitting. This led her to open her own knitting shop "The Ball and Skein" with her sister Loretta Wells.

She also enjoyed skating, biking, exercise class and volunteering at Queens Manor. She was an active member of Liverpool Baptist church where she sang in the choir and volunteered for many of their functions. She served as secretary for the Royal Canadian Legion Ladies Auxiliary Mersey Branch #38.

She remarried in 1989 to Victor Ell and moved to Fort Saskatchewan, Alberta where they loved to go fishing at Wolfe Lake and travelling abroad. After Vic passed away in 1992 she moved back to Dartmouth and enjoyed being around her family and friends.

She was an active member of Regal Road Baptist Church, Cole Harbour N.S. and served in many positions. She was a member of the Christian Ladies Fellowship Group and would develop the Food Bank Ministry and The Prayer Chain Ministry, as these were very dear to her heart.

She was a devoted Mother, Grandmother, Great Nanny and Aunt to many nieces and nephews. Nothing made her happier than family gatherings. She will be missed by all.

Ethel was predeceased by husbands Gilbert Davy, Jack Skipper, and Victor Ell; brothers, Merrill (Chick) Kaulback, John Kaulback; sisters, Edna Corkum, Mabel Cain, Blanche Wigglesworth, Audrey Thorbourne, and Miriam (Mid) Balcom; Son-In-Law, Clyde Martin. Arrangements and cremation have been entrusted to T. J Tracey Cremation and Burial Specialists, 71 McQuade Lake Crescent, Halifax. In lieu of flowers, donations can be made to your local Food Bank of choice. In keeping with Ethel’s wishes there will be no visitation. A Funeral service will be held at Liverpool Baptist Church on Saturday October 24, 2020 at 2 p.m. Covid-19 Protocols will be followed.