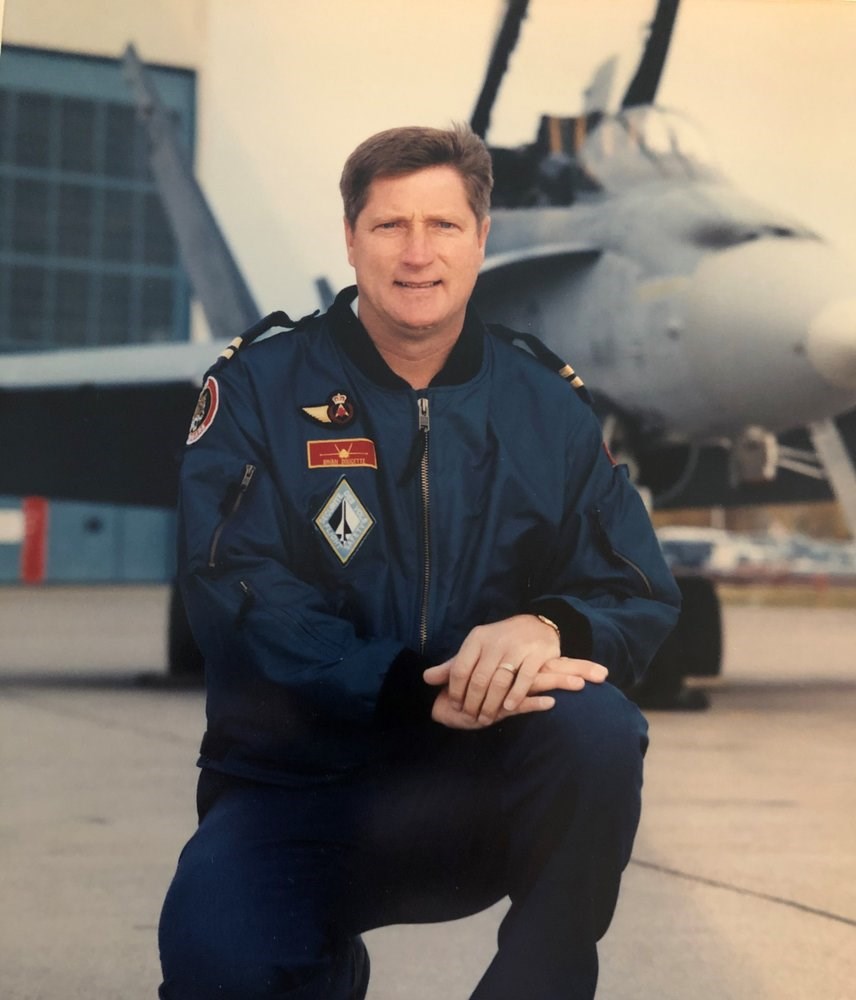 After a lengthy and hard-fought battle against cancer, Brian passed away peacefully surrounded by his close family and friends on 23 March, 2020 at the age of 63. Brian was predeceased by his mother, Glenna and is survived by his father, Edward (Rexton, NB), wife Paulette (Halifax, NS), son Kyle and fiancé Amy (Halifax, NS), daughter Kayla and partner Luke (Lake Louise, AB), sister Connie and husband Peter (Vancouver, BC), brother Tom and wife Lynn (Calgary, AB) and brother Peter and wife Alma (Winnipeg, MN). Brian was also predeceased by uncles Sonny (Clarke) and Dale (Clarke) all of Cobourg, ON, and survived by his loving aunt Marilyn (Quemby) and uncles Gary (Clarke) and Gregory (Clarke), and many other cousins, nieces and nephews.

Brian joined the Canadian Forces in 1977 and spent 23 years supporting various military aircraft as an avionics technician in several different and diverse capacities. In 1992, Brian was commissioned from the ranks as an aerospace engineering officer, later specializing in operational flight test activities. While posted to Cold Lake, AB in 1999, Brian showed his true character by risking his own life when he rescued a total stranger by pulling him out of a burning car. He would later receive the Governor General’s Medal of Bravery for his actions. In 2000, Brian retired from the CF and moved his family back to the Maritimes where he began work as a defence contractor in support of the CP140 Aurora, which he continued to do so until engaged in his battle against diffuse B-cell lymphoma starting in October 2019.

Brian lived his life by the golden rule and strived to do the right thing in all circumstances. He had many interests and hobbies most of which were family oriented. They included camping (from canvass tent to toy hauler), hiking, canoeing, kayaking, sailing Wishfull Wind, travelling, gourmet cooking, beachcombing, astronomy, bicycling, motorcycling, Choi Kwang Do, playing guitar with friends and many more.

In a quote from one of Brian's favourite movies, "The worst part about cancer isn't what it does to you, but what it does to the people you love." Brian wanted to say that no truer words were ever said. Above all else, Brian cherished his family and friends and could not ever thank them enough for the love and support they provided to him over the years and in his time of most need. Brian would often say “hold on to love, appreciate the time we have, and take care of each other”. Paulette was his true best friend and soul mate and he dedicated his life to her and to their children. Brian could not have been more proud of his son Kyle, a CF Naval Officer, and of his daughter Kayla who is dedicated to the beauty, adventure, and preservation of the Canadian Rockies. Brian also took great pride in his life-long close and personal relationships with his sister Connie and brothers Tom and Peter and their extended families, despite the challenges of living from coast-to-coast most of their adult lives.

A heart felt thank you to all the QEII 8A hematology and MDU doctors, nurses, CTAs and staff who provided exceptional and compassionate care to Brian throughout his battle with cancer. He respected every one of you for what you do and how professionally you do it for all patients. You are each his hero.

Prior to his cancer diagnosis, Brian was committed to donating blood and platelets, having given more than 100 donations. Having witnessed firsthand the volume of blood products used in a cancer ward daily, Brian sincerely requests that all consider donating whole blood or platelets on a regular basis at a Canadian Blood Services Donation Clinic near you.

Additionally, in lieu of flowers, donations can be made in memory of Brian to the Leukemia & Lymphoma Society of Canada at https://www.llscanada.org/

A private service to take place at a family gathering in New Brunswick in August 2020.