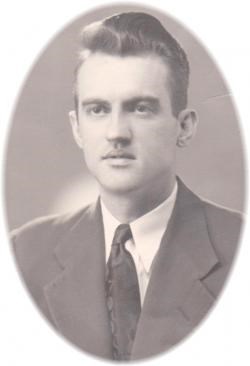 Harold Milton Curran - age 96, of Kentville, passed away peacefully, surrounded by his family, on Saturday, September 7, 2019 in the Valley Regional Hospital, Kentville. Born in Halifax, grew up on McNab’s Island, he was the son of the late Walter and Etta Maria (Lynch) Curran. Harold was a veteran of the Second World War, serving as a Radio Operator with the Merchant Navy in the North Atlantic and Caribbean and was a member of the RAF, stationed in Gander, Newfoundland. Following the war, he worked with the Marine Division of the RCMP and later moved to Ottawa and Montreal where he worked with the Department of Transportation and held various other government positions. He returned to Halifax and worked with the CBC Television in their audio division for over 20 years, from where he retired. He was a member of the Royal Astronomical Society and enjoyed photography. He loved music, especially Lawrence Welk and Don Messer. In most recent years, he enjoyed bird watching and all nature brought to the window. He is survived by his wife, Margaret (McClair); four daughters, Anne Curran, Halifax; Elizabeth (Kevin) McCann, Kentville; Mary Curran, Vancouver; Avril (David) Bird, Canaan; two sons, Andrew (Christine), Halifax; Alexander (Maureen), White Rock, British Columbia; seven grandchildren, Kaitlyn, Keighan, Kate, Ryan, Liam, Jayla, Jordyn. There will be no visitation, by request. The funeral service and reception will be held at 10:00 a.m. on Thursday, September 12, 2019 in the White Family Funeral Home, Kentville. Burial will take place at 3:30 p.m. in the Gate of Heaven Cemetery, Lower Sackville. Donations in memory may be made to the SPCA – Kings County. Funeral arrangements have been entrusted to the White Family Funeral Home and Cremation Services, Kentville.