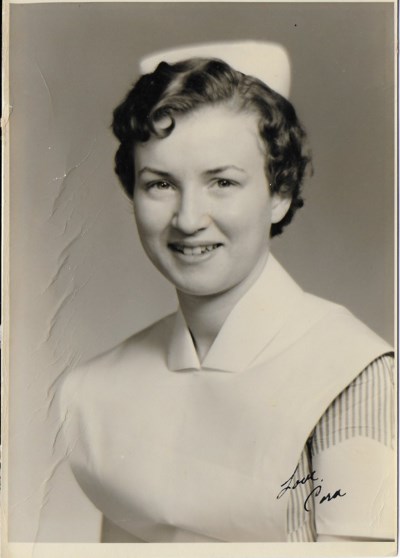 It is with profound sadness we announce that Cora Agnes (McKenzie) Bourgeois passed away on May 23, 2020 at the Victoria General Hospital, Halifax Nova Scotia.

Cora was born on April 21, 1938 in Sydney Nova Scotia to Guy McKenzie and Matilda (Chiasson). She attended Holy Angels High School, Sydney. Upon graduation she became a nursing student at the Sydney City Hospital becoming a Registered Nurse. Cora moved to Dartmouth where she completed post graduate studies at the Nova Scotia Hospital in psychiatric nursing and accepted a full-time position that continued until 1961. Cora did private duty nursing part time while staying home to raise her children for several years and then returned to full time nursing at Dykeland Lodge, Windsor Nova Scotia for 25 years.

Cora was a devoted, compassionate nurse for over 50 years, retiring at age 72; having spent time in the OR, working with sick children and geriatric care.

One of her proudest achievements was her family and in particular, her pride and joy, grandchildren Sara (Mike), Julian, Richard, Tyler (Bridgette), Kaleigh, Ashlyn, Rene, Felix and great granddaughter Lauren.

Cora had a place and time for all, including sponsoring 2 foster children each year through World Vision from 1963-2013. She gave everything she had to anyone who needed it, no matter the circumstances. That help never came with conditions or strings attached nor an expectation of payback. She had a gift of not only providing care but comfort - as a wife, mother, friend, and nurse. She was an excellent cook, biscuit and pie maker, avid reader and she enjoyed gardening, all things in nature, music and the arts. She went to great lengths to expose her children to new experiences in culture, arts and music – even at an early age. Whether the Lipizzaner stallions or learning some dance moves on a slick, newly waxed kitchen floor as she played music by the Beatles, Herb Alpert & the Tijuana Brass, and Simon and Garfunkel. She had a zest for experiencing all she could including Expo 67 with friend Marilyn, travel and the cottage in PEI- making new memories with the grandkids each year, welcoming friends and family, making lobster sandwiches and fresh raspberry pie. If there was something afoot, she was in, especially if it was a music concert. Local ceilidh? Check. Aerosmith? You bet. Jesse Cook? Absolutely! Elvis was king, as was Tony Bennett who she saw live in concert in 1986 and Barbra Streisand, another favorite. She was very proud of her Scottish heritage.

Cora is survived by her husband of 59 years Henry, Windsor NS and children Denise (Halifax), Philip (Joanne)Windsor, Brenda Steinsky(John)Gasperaux,PE, Paul(Mary)Riverview NB, Robert (Tara)Three Mile Plains, sister Blanche Andrews, Amherst NS and brother Raymond (Mary Ann)Florida. She is predeceased by her parents Guy and Matilda, brothers Guy, Gerald, George, Kenny, Gordon and sisters Eleanor and Shirley Grabka. She was one of 10 children and married into a family that had 17. In addition to immediate family, grandchildren and her first great grandchild, she is survived by countless nieces, nephews, cousins and a large social network of friends, some dating back to her days as a nursing student.

Cremation has taken place. A funeral mass and celebration of her life will be held at St. John the Evangelist RC Church, Windsor NS at a later date.

We wish to extend our sincere appreciation to Dr. Nathan and to the Victoria General Hospital, 6A staff for the extraordinary compassion and care given to Cora and her family. Your devotion to your professions is a gift.