BIBLE HILL, N.S. — Family members of victims and their supporters marched to an RCMP station on Wednesday, calling for a full public inquiry into the April mass shooting that left 22 people dead in Nova Scotia.
Jul 22, 2020 5:25 PM By: Canadian Press 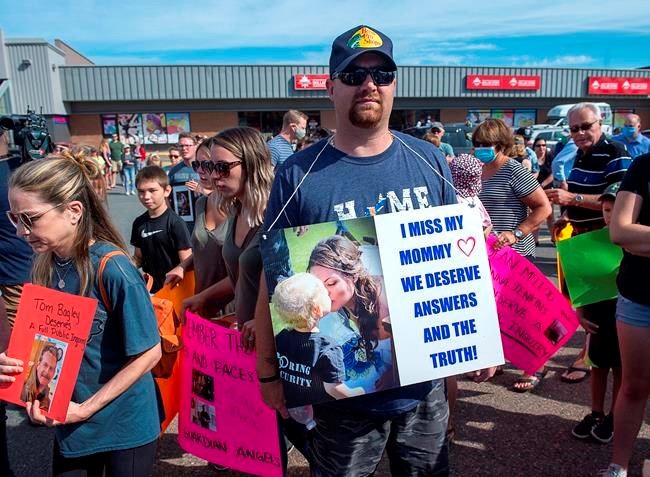 BIBLE HILL, N.S. — Family members of victims and their supporters marched to an RCMP station on Wednesday, calling for a full public inquiry into the April mass shooting that left 22 people dead in Nova Scotia.

About 280 people walked from a grocery store parking lot to the station in Bible Hill, N.S., where many of the RCMP officers who responded to the rampage were based.

The event was organized by families of the victims to protest the failure of the provincial and federal governments to call an independent public inquiry, more than three months after the April 18-19 killings in central and northern Nova Scotia.

Relatives carried signs in memory of each victim and chanted, "We demand answers" as they walked the three blocks. Children carried photographs of lost grandmothers as their parents pushed them in strollers.

Organizers Nick Beaton, whose wife Kristen Beaton was killed, and Darcy Dobson, who lost her mother Heather O'Brien, said the action was on behalf of all 22 families.

The families had an online meeting scheduled with Nova Scotia Justice Minister Mark Furey after the march, and late Wednesday, Beaton said he'd been informed that the province will make an announcement about an inquiry Thursday.

Beaton said he is "not fully pleased" about the planned format but declined further comment.

Earlier, Beaton had said he's concerned about shifting language from politicians on the nature of a potential inquiry, noting that at times the justice minister has referred to it as a simple "review."

The families want hearings that are open, overseen by an independent party and include a detailed look at the police response, he said.

"We deserve answers and the truth. We're finished sitting back. It's been three months now .... We want a public inquiry," he said.

Furey has said the provincial and federal governments were ironing out details of how an inquiry would work, and he has attributed delays to "legalities and technicalities."

He had originally said the investigation could take the form of a traditional federal-provincial public inquiry led by an independent commissioner, but on July 2 he made it clear that some sort of hybrid is in the works.

The challenges facing legal teams in Ottawa and Halifax appeared to stem from the fact that Nova Scotia wants the probe to include a restorative justice element.

When Nova Scotia created a "restorative inquiry'' in 2015 to look into allegations of long-term abuse at a former orphanage in the Halifax area, its collaborative approach featured private "sharing circles'' with former residents and others.

Dobson said she is concerned about the minister's recent statements, saying she would not favour efforts to shift testimony behind closed doors. She said she wonders what is behind the delays.

"There was supposed to be an announcement over a month ago, and there hasn't been," Dobson told reporters.

An emailed statement from the Nova Scotia Department of Justice late Wednesday said the province is working with Ottawa and "an announcement is forthcoming."

"We recognize the families, those most impacted, and all Nova Scotians are looking for, and deserve, answers about the tragic events that happened in April," the statement said.

Tom Webber, the father of victim Joey Webber, said in an interview that he has specific questions about how the killer managed to escape from Portapique after committing 13 murders and setting fire to homes.

His son was killed on April 19 during an errand to pick up furnace oil in Shubenacadie, N.S., and the killer then stole Joey Webber's car.

"The police don't seem to give us any answers, and that's what we're looking for," Webber said.

"It's hard to imagine this really happened. You wake up thinking that it didn't happen. But it did."

Leon Joudrey, a resident of Portapique who gave shelter to the shooter's common law spouse early on April 19, said he's also hoping for an open inquiry that looks carefully at the police response.

He recalled a nightmarish scene of burned houses and dead bodies in the small community in the early hours of April 19, and yet when he drove through the community, he said he saw little police presence.

Joudrey said if officers had knocked on his door, he could have provided helpful information about the killer, Gabriel Wortman, a 51-year-old Halifax denturist.

"I'm here today to point out the fact the police didn't handle this correctly at the management level .... Let's a get a public inquiry going," he said.