The little airline that could: Cape Breton air charter service launches in pandemic

HALIFAX — When billionaires in private jets began touching down in rural Nova Scotia to play a round of golf on Cape Breton’s world-class links, David Morgan saw an opportunity.
Jun 8, 2021 5:25 PM By: Canadian Press 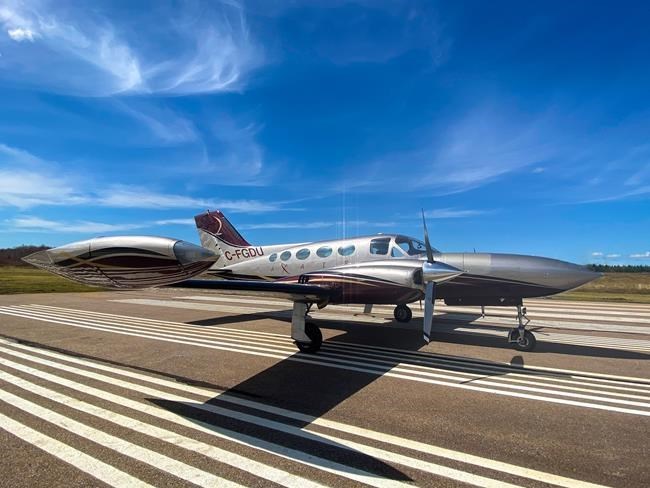 HALIFAX — When billionaires in private jets began touching down in rural Nova Scotia to play a round of golf on Cape Breton’s world-class links, David Morgan saw an opportunity.

The golf enthusiasts – a mix of Fortune 500 business leaders and pro athletes – were flying into an aging airport in Port Hastings, N.S., that lacked aircraft services and amenities.

Then the COVID-19 pandemic crumpled global tourism, emptying out golf resorts and airports. But rather than stand down, Morgan’s plan to launch an airline gained speed.

As commercial air carriers slashed routes across Atlantic Canada, he put an offer in to buy a small Quebec-based airline “on a wing and a prayer.”

His offer was accepted, and AxAir Aviation launched two months ago offering air charter services across the Northeastern Seaboard.

“Everybody has a dream, and mine was always to own an airline,” said Morgan, president of AxAir Aviation and Celtic Air Services Limited. He says the ultimate goal is to grow the business into a vertically integrated aviation company.

The startup’s fleet consists of a single Cessna 421 aircraft, a twin-engine airplane with a range of about 1,600 kilometres that seats five passengers.

While the airline aims to cater largely to business travellers and tourists, so far it has flown fishing crews, transported parcels and delivered essential goods around the region, Morgan said.

“We can pick up someone in Yarmouth or Digby and have them in Cape Breton for a morning tee-off and back home again that night,” he said. “From Cape Breton you can reach Charlottetown in 25 to 35 minutes, so it’s a fairly economical private charter flight.”

Still, attracting business travellers once the economy reopens will be critical to its survival, experts say.

Yet even as most commercial airlines resume service to the East Coast, industry experts say there will continue to be a market for an air charter service.

“If you have a meeting in a small town or at a mine or a lumber mill in a remote area, a charter flight can take you directly there instead of leaving the night before and taking a convoluted route and having to stay overnight.”

He added that time is valuable for businesses and their employees, especially at the senior executive level.

“Their time is worth a lot of money,” Moore said. “When you compare the cost of a charter to wasting half a day of my CEOs time, it’s worth it.”

While the rapid adoption of technology and the use of online video communication tools during the pandemic has increasingly replaced the need for face-to-face meetings, experts say businesses may still use charter flights to connect employees for team-building exercises.

"The way business travellers use aviation could shift," said Suzanne Kearns, associate professor of aviation at the University of Waterloo.

"Rather than charter a flight for a meeting, it could be used for different experiences," she said. "I think we've all realized after living at home for a year that there's value in human connection."

Indeed, businesses could charter AxAir to take employees to Cape Breton for some morale-boosting time on the links, Morgan said.

"People are going to be looking for ways to bond their groups, especially if they've been working from home for more than a year," he said.

Meanwhile, the entrepreneur from Margaree said his dream doesn't stop with the airline.

This report by The Canadian Press was first published June 8, 2021.