PORTERS LAKE, N.S. — More than 1,000 residents in a community east of Halifax were being evacuated from their homes Saturday due to a nearby wildfire that was estimated to cover 40 hectares by late afternoon.
May 23, 2020 10:10 PM By: Canadian Press 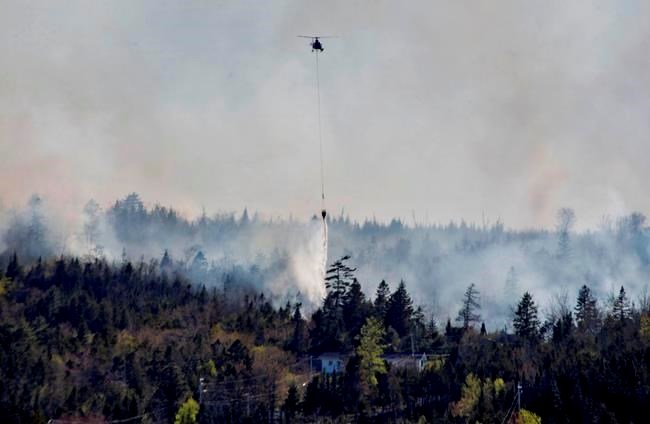 PORTERS LAKE, N.S. — More than 1,000 residents in a community east of Halifax were being evacuated from their homes Saturday due to a nearby wildfire that was estimated to cover 40 hectares by late afternoon.

Halifax Regional Fire and Emergency Services said in an afternoon statement that roads were closed in the Porters Lake area between Highway 107 south of West Porters Lake Road to Majorie Drive and Capri Drive, where evacuations were underway.

Residents on Candy Mountain Road were also being asked to prepare to evacuate, and the statement said the perimeter for evacuations may need to be expanded.

RCMP officers were on the scene for traffic control and to assist Ground Search and Rescue teams going door to door, advising residents to evacuate.

The fire department says the first report of a fire in the woods near the 100 block of West Porters Lake Road came in at approximately 12:20 p.m. local time.

She said some evacuated people may be staying with relatives, and the fire department has access to other comfort centres if space becomes an issue.

In Twitter posts earlier in the day, the fire services department said evacuations were ongoing due to the "significant brush fire," advising people of the highway closure and asking residents to avoid the area.

"Fire conditions are somewhat better, but this fire is not under control," a tweet posted just before 3:30 p.m. read.

By nightfall, the fire was between 30 and 40 per cent contained, another tweet said.

The firefighters stopped for the night, but officials said they'd be back at it on Sunday morning, according to a statement from the fire department. Some crews would remain on the sene overnight to monitor the situation.

Jim Rudderham, the province's acting manager for forest protection, said three provincial helicopters were fighting the fire along with 15 personnel from Lands and Forestry and members from eight fire stations in the Halifax Regional Municipality.

"They're making some good headway on it but ... it's still out of control," Rudderham said by phone Saturday.

He said the fire was first reported on the north side of the highway before it was carried by the wind.

"The wind caught it and it quickly went to the other side of the highway," he said.

The Lands and Forestry department also advised Saturday of a province-wide ban on burning, saying fire risk in the province is high because of dry conditions, winds and low humidity.

Environment Canada issued an air quality advisory for the Halifax Metro and Halifax County West regions on Saturday afternoon due to the smoke from the fire.

This report by The Canadian Press was first published May 23, 2020.

Gosse Bridge will close overnight for repairs
Oct 25, 2020 2:45 PM
Comments
We welcome your feedback and encourage you to share your thoughts. We ask that you be respectful of others and their points of view, refrain from personal attacks and stay on topic. To learn about our commenting policies and how we moderate, please read our Community Guidelines.