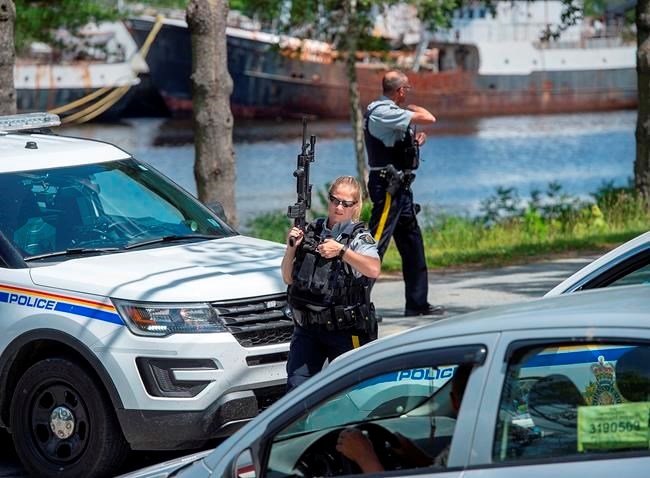 BRIDGEWATER, N.S. — Police continued their search Wednesday on Nova Scotia's South Shore for a fugitive accused of stabbing a police sergeant, assaulting a woman and injuring a police dog.

Tobias Charles Doucette, who is in his 30s, was charged with attempted murder after he allegedly struck an officer in the neck with an edged weapon when police responded to a domestic violence call Monday night at the Bridgewater Hotel. The suspect allegedly fled on foot.

An RCMP dog and handler located Doucette briefly Tuesday, but the suspect escaped, fleeing into the woods on foot off Highway 331 in Conquerall Bank, N.S. The dog was stabbed with a stick during the encounter, police say.

"We are trying to get the word out any way we can that if people have information about where Tobias Doucette is, we need them to contact us," RCMP spokeswoman Cpl. Jennifer Clarke said in an interview Wednesday. "It's really important that we bring this to a peaceful resolution."

Clarke said police had received a number of tips on Doucette's whereabouts, but none had been substantiated as of Wednesday afternoon.

She said police had set up several checkpoints but only one remained in operation Wednesday afternoon on Highway 103 near Hubbards, N.S. Clarke said the RCMP was being assisted in the search by federal agencies. A military aircraft was also being used.

She wouldn't say whether Doucette was known to police but cautioned that members of the public should avoid contact if they encounter him. Doucette is described as six-foot-two, weighing 220 pounds and has brown hair and green eyes.

"What's taken place so far would lead a person to believe that they definitely should not approach him if they see him, and they should just call us right away," Clarke said.

Bridgewater police said the officer injured in Monday's incident —  Sgt. Matthew Bennett — is a 13-year member with the police service. He underwent successful surgery Tuesday and is recovering in hospital.

The female victim, who is described as the suspect's common-law partner, was treated for minor injuries.

Meanwhile, the condition of the injured police dog, Fergus, was described as stable.

On Twitter, the RCMP said the dog "bravely protected his handler while in the line of duty." They said he is being closely monitored by a veterinarian and they are "very hopeful" he will recover.

The RCMP's critical incident command has taken over the search for Doucette.