HALIFAX — The centre of post-tropical storm Teddy made landfall in eastern Nova Scotia on Wednesday morning and then trudged across southern Cape Breton, its 100-kilometre-per-hour winds causing power outages — but not much damage.
Sep 23, 2020 2:07 PM By: Canadian Press 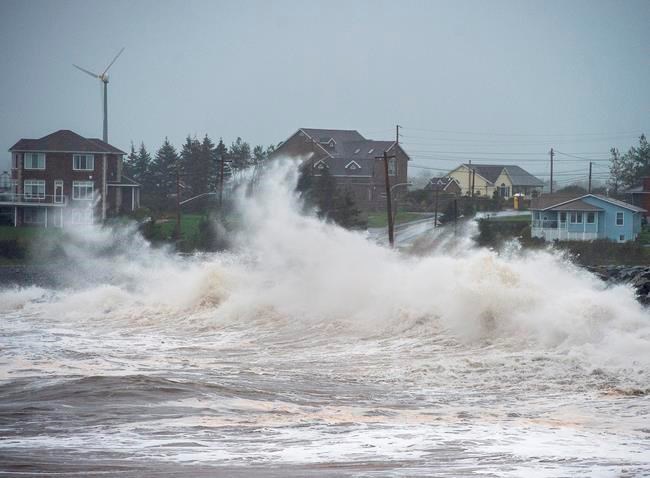 HALIFAX — The centre of post-tropical storm Teddy made landfall in eastern Nova Scotia on Wednesday morning and then trudged across southern Cape Breton, its 100-kilometre-per-hour winds causing power outages — but not much damage.

Bob Robichaud, a meteorologist at the Canadian Hurricane Centre in Halifax, said the sprawling, ragged storm came ashore near Sheet Harbour around 10 a.m., about 115 kilometres east of Halifax, and then took its time passing overhead.

On Hart Island, which is north of Canso at the eastern edge of the mainland, a peak gust of 107 km/h was recorded at 10 a.m. local time. In the lower half of Cape Breton, the small community of Eskasoni recorded a gust of 104 km/h.

Schools were closed, public transit in Halifax was suspended until noon and many flights were cancelled, but Teddy didn't leave much of a mark on the province.

"There was no hurricane Teddy," Tina Boutilier said as she and Glenn Robb watched the waves crash against the seawall in Cow Bay, east of Halifax. "This is just a windy day in Nova Scotia."

Robb chose to look on the bright side. "I'm just glad there's no damage," he said. "The waves are beautiful. They're huge. They're breaking out there kilometres away."

Despite Teddy's unruly bluster, the sheltered harbours along the eastern shore appeared to weather the storm. In East Chezzetcook harbour, about 40 kilometres east of Halifax, fishing vessels bobbed safely in choppy waves as Teddy moved over the area.

Further east in Guysborough, municipal councillor Sheila Pelly said the storm wasn't nearly as bad as post-tropical storm Dorian, which caused widespread damage and knocked out power for 500,000 people across the Maritimes in September 2019.

"It's not raining hard, by any means," she said. "It's windy .... It's much calmer than Dorian. I think it's not as bad as it was thought it might be. Not in this area anyway."

Shawn Andrews, director of fire, emergency and information services in the Municipality of Guysborough County, said a few trees were downed along the coast by gusty winds, causing some power outages.

"There's blue skies right now," he said in the late morning. "I'm assuming the worst is over ... I guess the wind wasn't as high as anticipated."

Still, thousands of homes and businesses across Nova Scotia lost power Tuesday night as Teddy moved close to the coast as a Category 2 hurricane before transforming into a post-tropical storm overnight.

The hurricane centre as well as public officials had warned that the eastern shore and southeastern Cape Breton could be hit by a damaging storm surge propelled by large waves. But there were no reports of problems by early afternoon.

Communities in central and northern Nova Scotia received between 50 and 100 millimetres of rain, as was forecast.

Robichaud said a rain gauge at his home in Fall River, just north of Halifax, recorded 100 mm of rain before Teddy pulled away.

P.E.I. residents were expected to get 50 mm of rain amid greatly diminished wind speeds.

In southwestern Newfoundland, residents were warned to watch for a storm surge, but the wind and rain weren't expected to pose much of a threat.

Marine Atlantic, the Crown corporation that operates the ferry service linking Nova Scotia with Newfoundland, cancelled all sailings across the Cabot Strait on Wednesday.

"The storm is weakening as it's moving towards there," Robichaud said. "We don't expect any major impacts there."

This report by The Canadian Press was first published 23, 2020.

— With files from Michael Tutton

RCMP release images of persons on interest in suspicious fish plant fire (2 photos, video)
Oct 30, 2020 12:20 PM
Comments
We welcome your feedback and encourage you to share your thoughts. We ask that you be respectful of others and their points of view, refrain from personal attacks and stay on topic. To learn about our commenting policies and how we moderate, please read our Community Guidelines.