Policing must be adequate to keep 'everyone' safe in Indigenous lobster dispute: PM

HALIFAX — Justin Trudeau called Friday for federal agencies to ensure those involved in an Indigenous-led lobster fishery are safe, a day after a Mi'kmaq chief accused him of offering words rather than action.
Oct 16, 2020 3:58 PM By: Canadian Press 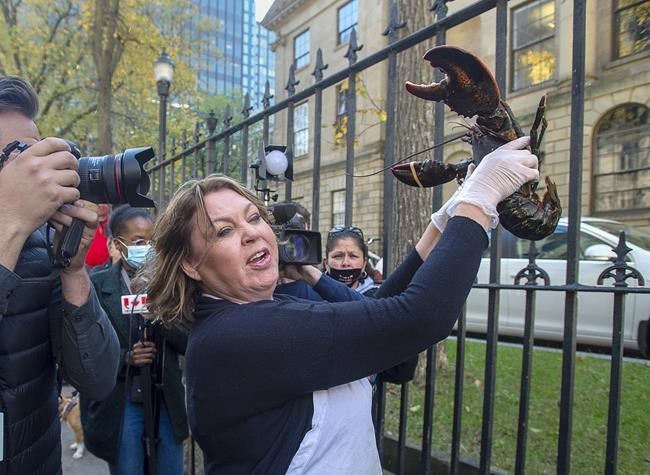 HALIFAX — Justin Trudeau called Friday for federal agencies to ensure those involved in an Indigenous-led lobster fishery are safe, a day after a Mi'kmaq chief accused him of offering words rather than action.

Chief Mike Sack of the Sipekne'katik First Nation held a news conference Thursday to condemn Ottawa's handling of the situation.

He referred to the RCMP as "useless," saying the force sent too few officers to the tense scenes in the two communities.

As for Trudeau, Sack said he had to go beyond sending comforting tweets and begin to send reinforcements for the law enforcement agencies on land and water.

Trudeau told reporters in Ottawa his government has called for an end to the violence and harassment and agreed his government must ensure adequate policing.

"We need to make sure that our police, our security officials are there to make sure everyone is protected," he said.

"We will certainly continue to work toward reconciliation with Indigenous peoples, recognizing the rights they have, established for quite some time, regarding the fisheries, and we must find a way forward that will work for everyone."

The Sipekne'katik band argues Indigenous people in Atlantic Canada and Quebec have a treaty right to fish for a moderate livelihood where and when they want, based on a 1999 Supreme Court of Canada decision that cites treaties signed by the Crown in the 1700s.

Many non-Indigenous critics, however, invoke a clarification issued four months after the 1999 ruling, stating the Mi'kmaq treaty rights would be subject to federal regulations to ensure conservation of the resource, in consultation with First Nations.

Darryl Davies, a criminologist based at Carleton University in Ottawa, said in an interview Friday that the tense confrontations are showing the RCMP don't have enough officers in place in rural detachments.

He said officers have little option but to stand by, rather than start making arrests, when there aren't enough "boots on the ground" to quell a potential riot.

Davies — who has studied RCMP policing and training — says this week's events illustrated a lack of planning for a situation that has shown potential to erupt for over a month, since the Indigenous fishery was launched in mid-September.

"You need resources . . . . You need to be able to show some force that will deter these people," he said.

A spokesman for the RCMP, Sgt. Andrew Joyce, said the police presence is growing now. "Our presence has increased each day since the events of Oct. 13 (Tuesday)," he wrote in an email.

Meanwhile, some Indigenous activists showed little sign of backing down in the push to create a market for the Indigenous fishery.

A group set up in front of the legislature in Halifax Friday to sell lobster, and over 100 people lined up to purchase the catch from Cheryl Maloney, a member of the Sipekne'katik band.

The sale and purchase of lobster without a federal commercial licence is considered illegal under a provincial regulation.

Joel Comeau, a fisherman based in Meteghan, N.S., said in an interview that the conflict is taking an emotional toll on all concerned.

He said he is worried about his small, predominantly francophone community, because it is depressed and "emotionally shattered" by the ongoing tensions with the Indigenous fishing in St. Marys Bay.

He said Friday he is stepping down from his local position with the Maritime Fishermen's Union because he and his family have become fatigued from trying to advocate for a solution.

The 45-year-old fisher said the federal Fisheries Department has failed to include all parties in talks, and frustrations have boiled over.

"Everybody is hurting inside. My wife pulled me inside and said, 'We can't continue this fight,' " he said.

This report by The Canadian Press was first published Oct. 16, 2020.