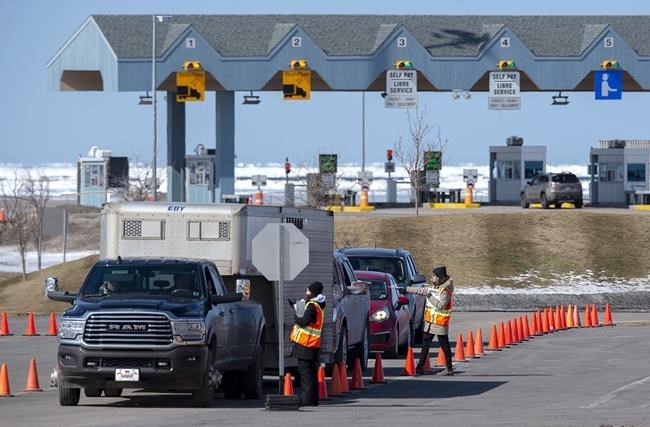 As of July 3, Atlantic Canadians will be allowed to travel within the region without having to self-isolate when arriving in another province.

Visitors from provinces and territories outside the region will still be required to self-isolate for two weeks and adhere to local entry requirements. However, once the self-isolation period has passed, those visitors will also be allowed to travel within the Atlantic region.

Newfoundland and Labrador Premier Dwight Ball said the decision to ease restrictions was not taken lightly.

"As this Atlantic bubble opens, it will be closely monitored as we remain committed to working together to support economic and social recovery while ensuring public health and safety," said Ball.

Ball said if all goes well, travellers from other parts of Canada could be allowed to enter Atlantic Canada around July 17.

"Now this can only be possible if we get favourable results in the days and weeks leading into July 17," he said. "We will never hesitate to go back if we have to."

In Halifax, Nova Scotia Premier Stephen McNeil said he was comfortable with the move given the province hasn't had a new case of COVID-19 since June 9.

"Considering there's been very few new cases now is the time to open it up," McNeil said.

Each of the four Atlantic provinces will choose its own process for tracking and monitoring travellers.

In Nova Scotia, McNeil said border monitoring would involve asking people for identification in order to verify which province the traveller is from. Those with identification from outside the Atlantic region would be required to self-isolate.

The move is mainly aimed at the tourism sector, which is hoping to see increased local traffic this summer to help bolster lagging business, McNeil said.

"We are also looking at what other potential internal restrictions we could start easing off a little bit to allow us to get back to a little more economic activity within the province."

The relaxed rules come as Nova Scotia — the most populous province in the region — had no active cases. The province had 1,061 total confirmed cases, including 63 deaths — 53 of them at a single long-term care facility in Halifax.

In Newfoundland and Labrador, where there were 261 confirmed cases and three deaths, the most recent case of COVID-19 was recorded on May 28. Like Nova Scotia, the province had no active cases as of Wednesday.

New Brunswick reported its latest case on Tuesday, but the person was in self-isolation before the diagnosis and has had no close contacts. The province has 20 active cases. Of the 165 people with confirmed infections, two have died and 143 have recovered. No new cases were reported Wednesday.

Prince Edward Island had just 27 cases of COVID-19 and all have recovered. The Island last reported a case on April 28.

In New Brunswick, virtually every business in the province is expected to be reopened by this Friday.

He said the Campbellton region — which experienced a recent outbreak of COVID-19 cases — would join the rest of the province at the "Yellow" phase of the recovery plan on Friday.

"There are still rules we will all need to follow," Higgs said, adding that residents of Atlantic Canada can't leave their home province if they have travelled outside the region in the past 14 days — even if they were travelling for work.

As well, no one is permitted to travel to another province if they are experiencing symptoms of the virus.

"Peace officers will still be monitoring the borders and travellers will need to provide proof of their province of residence," the premier said, noting that officers will use that information for contact tracing if there is an outbreak.

Higgs said there are also discussions underway about opening interprovincial travel throughout the country.

— With files from Kevin Bissett in Fredericton and Keith Doucette in Halifax.

This report by The Canadian Press was first published June 24, 2020.

Note to readers: This is a corrected story. A previous version gave an incorrect day of the week for the announcements from New Brunswick and Nova Scotia.

Halifax projects approved by city council for federal housing program
Nov 24, 2020 5:33 PM
Comments
We welcome your feedback and encourage you to share your thoughts. We ask that you be respectful of others and their points of view, refrain from personal attacks and stay on topic. To learn about our commenting policies and how we moderate, please read our Community Guidelines.