HALIFAX — Hikers and other nature lovers are being urged to be on the lookout for ticks as they return to trails and forested areas across the country this summer.
Jun 20, 2020 6:27 PM By: Canadian Press 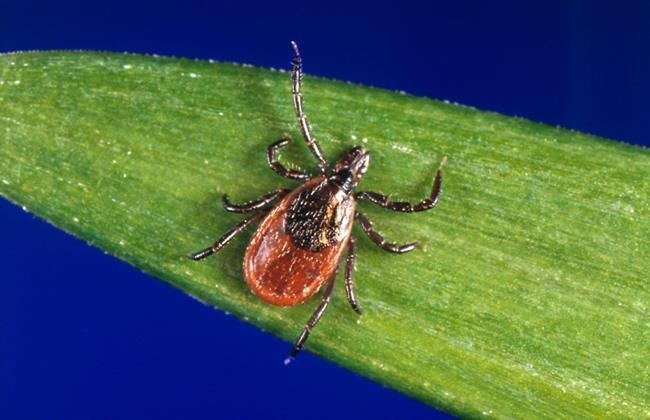 HALIFAX — Hikers and other nature lovers are being urged to be on the lookout for ticks as they return to trails and forested areas across the country this summer.

Tick season runs from a peak in spring and early fall until late into October and the Nature Conservancy of Canada is urging people to take precautions against blacklegged or deer ticks that can carry various bacterial diseases, including Lyme disease.

John Foley, an Atlantic region vice president with the Nature Conservancy, said ticks are becoming more common throughout the four Atlantic provinces as well as most other provinces in Canada with the exception of Saskatchewan.

Foley said since the climate has become warmer, several species of ticks have made the journey from the U.S. and have adapted to cooler northern areas of Canada in recent years.

"Ticks in general are really increasing in numbers," said Foley. "It wasn't that long ago Nova Scotia was really the only province in Atlantic Canada that had traces of deer ticks and now you can find them in every province including Newfoundland."

Ticks are arachnids from the same family as scorpions, spiders and mites. They hide in the shade, in wooded areas and in long grasses, and can be carried from place to place by migratory birds. Unaided they can travel anywhere from 20 to 40 kilometres in a year.

Steve Schofield, an entomologist who is also a senior scientific adviser to the Department of National Defence and lives just outside Ottawa, said he first started noticing ticks in his large backyard about five years ago.

In fact, Schofield said Ottawa is now considered a "hyperendemic area" meaning simply that there are a lot of ticks and their infection rates are fairly high.

"That's the general pattern you are seeing through much of Ontario," he said. "It's still fairly patchy but it's coalescing into a wider distribution."

Schofield said while people don't need to be alarmed, they have to be aware that there is a risk associated with blacklegged ticks in particular.

Schofield said checking for ticks after a hike or walk in the woods is an important habit because early removal can prevent the transmission of things like Lyme disease. That's because a tick, unlike a mosquito, feeds on its host for five or six days.

Foley said there are a number of steps people can take to minimize the risk of exposure from tick bites, including wearing bug repellent containing Deet.

It's recommended that hikers stay in the centre of a trail when exploring and that people sit on a rock instead of the ground when they need a break.

People should wear light coloured clothing in order to enable them to see any ticks that have attached themselves.

The clothing should include long-sleeved shirts and long pants to keep skin protected and they should cover their head with a hat. There is also clothing available that has tick repellent material.

And tucking pants into socks or boots can offer extra protection, because ticks are usually found close to the ground.

And after returning home it's recommended that people check their body, equipment and pets before going indoors.

Foley said with people emerging from their homes as COVID-19 restrictions loosen, the idea of the warning is not to scare people.

"People should still go outside and enjoy nature," he said. "But they should take precautions more than in the past."

This report by The Canadian Press was first published June 20, 2020.

Former N.S. teacher sentenced to 15 years for decades-old child sex assaults
Aug 11, 2020 2:31 PM
Comments
We welcome your feedback and encourage you to share your thoughts. We ask that you be respectful of others and their points of view, refrain from personal attacks and stay on topic. To learn about our commenting policies and how we moderate, please read our Community Guidelines.