HALIFAX — Ottawa's decision to close fisheries off the southwest coast of Nova Scotia after North Atlantic right whales were detected in the area is necessary to protect the endangered animals, according to an aquatic species researcher.
Nov 24, 2020 5:48 PM By: Canadian Press 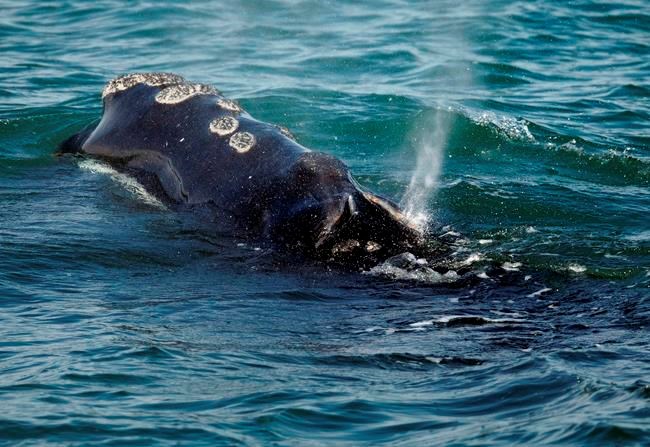 HALIFAX — Ottawa's decision to close fisheries off the southwest coast of Nova Scotia after North Atlantic right whales were detected in the area is necessary to protect the endangered animals, according to an aquatic species researcher.

Fred Whoriskey, executive director at the Ocean Tracking Network, which is affiliated with Dalhousie University, said recent measures to protect the right whales are working.

“We've taken ourselves from having more than 10 animals being killed in Canadian waters, down to none,” Whoriskey said in an interview Tuesday. Tools such as underwater gliders that track acoustic signals as well as aerial drones are helping keep the animals alive, he said.

And so are temporary closures of fisheries, Whoriskey explained. Ottawa said that starting Thursday evening, fisheries operating within certain sections of the Roseway Basin must close until further notice.

Whoriskey said right whales previously fed in the Bay of Fundy, but recently shifted toward the Gulf of St. Lawrence in search of food. The quick change in the whales' migratory path resulted in an increase in right whale deaths, he added, because of the intense fishing and shipping traffic in the Gulf.

Temporarily closing fisheries in the animal's path up to the Gulf is crucial to protecting the animals, he said, which have been getting entangled in fishing gear. The U.S.-based National Oceanic and Atmospheric Administration recently estimated the right whale population has dropped dramatically, to 366 in 2019 down from 412 in 2018.

“Within the last few years, that pattern that we've grown to know and love and predict things around has massively changed and we think it's because the food production in these historic areas is beginning to turn off, probably related to climate change issues,” he said.

He said, however, the fishery closures have been accepted by industry stakeholders in the shipping and fishing sectors as a necessity to ensure the safety of the aquatic animals.

Other fisheries in the affected area include crab, herring and mackerel. Groundfish vessels using fixed gear will be prohibited from operating in the zone.