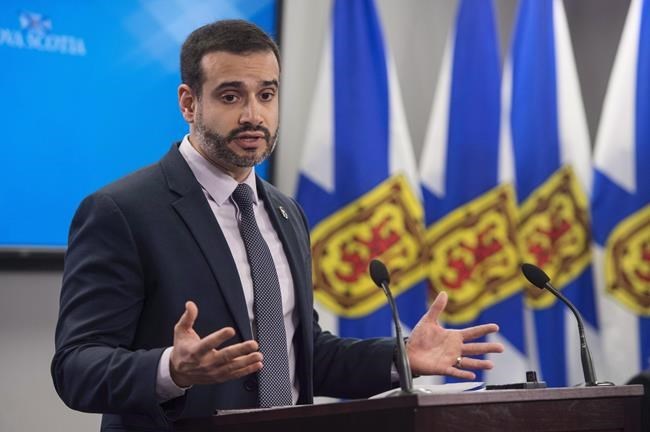 HALIFAX — Nova Scotia's teachers are warning that the province's schools aren't ready to reopen as planned next week.

The union says members are reporting ventilation systems that haven't been inspected or repaired, a lack of proper handwashing stations, and hallways filled with old furniture from teachers emptying classrooms to increase space.

Union president Paul Wozney says he's asked the province to at the very least, allow two professional development days to be shifted to the beginning of the school year to give staff more time to prepare.

Education Minister Zach Churchill, however, said Wednesday the province is proceeding with its plan to reopen classrooms on schedule next Tuesday, adding there's a plan in place to swiftly remove students from school who might be infected.

Some parents groups have requested schools conduct temperature checks on children and have asked for more separation between students in classrooms.

Churchill told a news conference he understands parents' concerns, but said the province has a low level of community spread making it safe to reopen classrooms without two metres of distance between all students.

"There has been built-up tension in every sector before reopening," he told reporters. "We experienced that in the child-care sector. As a parent I was nervous."

"But I think as people get back to school and see the measures in place and get used to the new habits we have to develop ... that will help with reduction of anxiety."

Churchill and Dr. Robert Strang, the province's chief medical officer of health, provided details Wednesday on how public health will respond when cases of COVID-19 are identified in schools.

Students, teachers or others who have had some or prolonged contact with someone who tests positive for COVID-19 will be sent home to isolate for two weeks and will be tested.

Those who had casual contact with a confirmed case, either by walking past them or being near them in a hallway or in other common areas, will not be required to isolate.

Asked about parent and union concerns over the lack of social distancing in many classrooms, Strang said there are other health measures in place to ensure safety. Those include, he said, mask-wearing rules for people in hallways or in school buses and increased hygiene requirements.

"All those together provide the appropriate level of safety for where we're at with a low risk of COVID-19 in school," he said.

Churchill noted the province's plan — announced last month — requires that if there is a major outbreak the system will shift to a so-called blended model where senior students are sent home to learn online.

This would create space in schools, he said, allowing middle and elementary school children to continue attending classes with stricter adherence to two-metre social distancing.

The education minister has already announced $40 million in new funding to hire additional substitute teachers and school custodians, to buy more school supplies and to extend the workday of early childhood educators.

He's also said every school's ventilation system will be assessed to ensure the equipment is operating properly, and has said officials will also be looking at the condition of the windows in older schools that have no other means of bringing fresh air into the building.

Under Nova Scotia's plan, staff and students will be required to wear a mask in common areas where physical distancing is difficult, such as hallways and school buses, but not inside classrooms.

Students are also asked to bring their own computers to school and the provincial government says it acquired an additional 14,000 computers at a cost of $4 million to support those with limited access to technology.

Children without high-speed internet would receive assignments either via telephone or through a portable data storage device.

This report by The Canadian Press was first published Sept. 2, 2020.