HALIFAX — The Nova Scotia government is moving ahead with plans to further reopen the province now that it hasn't reported a case of COVID-19 in the past 17 days.
Jun 29, 2020 11:54 AM By: Canadian Press 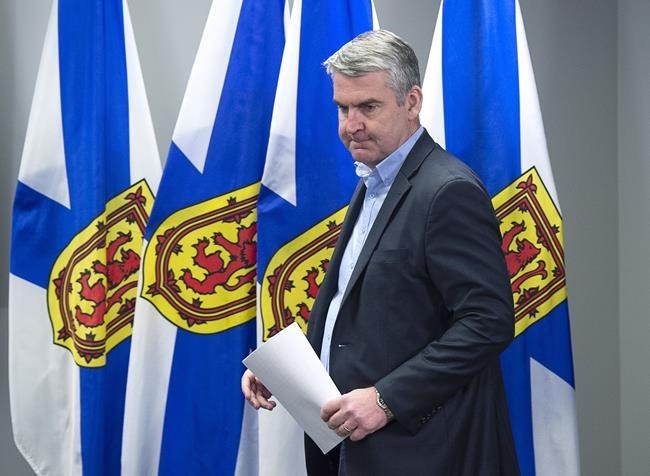 HALIFAX — The Nova Scotia government is moving ahead with plans to further reopen the province now that it hasn't reported a case of COVID-19 in the past 17 days.

However, Premier Stephen McNeil warned Friday that with limits being raised on how many people can gather at bars, restaurants and organized events, the risk of a resurgence in infections was also increasing.

As a result, the province has issued an emphatic recommendation for residents to wear non-medical masks when physical distancing among strangers becomes difficult.

McNeil said Nova Scotians must get in the habit of wearing a mask, noting that he has had to change his own habits.

"Even when I saw others wearing them, I didn't always wear one myself," he told a virtual news conference.

"I've had to rethink this and do a bit of soul-searching. After all, when someone is wearing a mask, they are protecting me and others. So I need to do the same for them."

The premier then offered a slogan of sorts to promote the use of masks.

The province's previous advice was to ask residents to "consider" wearing a mask when physical distancing couldn't be maintained.

But the province's chief medical officer of health, Dr. Robert Strang, said he wants to "normalize" the wearing of masks to reduce the inherent risks that come with allowing larger gatherings.

As examples, Strang said masks should be worn when entering grocery stores or malls, using public transit or at public gatherings with limited space.

"Wearing a mask is a way of showing that we care about other people," he said.

Meanwhile, the province announced Friday that all bars and restaurants will be allowed to operate at full capacity and continue serving until midnight, effective immediately.

However, that change assumes establishments will continue to adhere to physical distancing rules, which has required bars and restaurants to create more space for patrons by moving chairs and tables farther apart.

The province is also allowing private campgrounds to operate at 100 per cent capacity, and all public pools can reopen with physical distancing for lane swimming and aquafit classes.

As of next Friday, Nova Scotia will increase the limits on gatherings organized by recognized business or community organizations.

That includes weddings, funerals, cultural events, concerts, festivals, dance recitals and faith-based gatherings, which will increase to 250 people if they are outdoors and 200 — with maximum 50 per cent capacity — if they are indoors. In either case, physical distancing is still required.

These events do not include family gatherings, which remain limited to a 50-person maximum with physical distancing.

Last week, the province announced that Nova Scotians could start gathering in close social groups of up to 10 without physical distancing.

Though the province announced these groups did not have to be exclusive, Strang said Friday there seemed to be confusion over what that actually meant.

"We're telling people that you can chose who is in your group of 10, but this is limited," he said, adding that it was wrong to think any random gathering of 10 people was acceptable. "Ideally, people would have a single, closed social group."

A total of 1,061 people in Nova Scotia have tested positive for the virus — and 63 of those people have died, most of them in a long-term care facility in Halifax. Two people remain in hospital, though their cases are considered among the 998 officially resolved cases.

This report by The Canadian Press was first published June 26, 2020.

Nova Scotia premier says Atlantic bubble successful despite withdrawal by partners
Nov 27, 2020 5:55 PM
Comments
We welcome your feedback and encourage you to share your thoughts. We ask that you be respectful of others and their points of view, refrain from personal attacks and stay on topic. To learn about our commenting policies and how we moderate, please read our Community Guidelines.