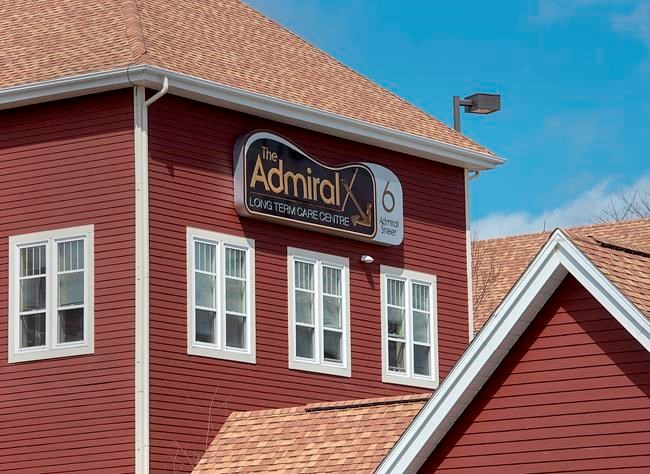 HALIFAX — Nova Scotia recorded one of its largest single daily jumps in confirmed COVID-19 cases Tuesday, a development partly attributed to outbreaks in at least two long-term care homes in the Halifax area.

The province reported 43 new cases, pushing the total number of confirmed cases to 517, on a day when the three other Atlantic provinces each reported no new cases of the virus.

Dr. Robert Strang, the province's chief medical officer of health, said of the 43 new cases reported, 13 were in the Northwood facility in Halifax, and 14 in two communities in east Dartmouth.

Strang said long-term care homes and the community outbreak in east Dartmouth are the province's most pressing concerns in fighting the virus, adding there are some connections between the homes and some people who work in them and live in the affected communities.

"If we can control and limit community spread, that is critical to minimizing the opportunity for COVID to be introduced into our long-term care facilities," Strang said. "So the two go hand-in-hand."

He said all but one of the Northwood residents have mild illness or are asymptomatic and are still testing positive.

"We move in and support any long-term care facility with the necessary resources and expertise to help them manage their outbreak and we are doing that right now with Northwood," he said.

Strang said during any outbreak at a long-term care home, facilities are provided with testing kits and are expected to create isolation units within the homes "as best they can" to separate residents.

He said one of floors in Northwood is now the facility's isolation unit.

On its website Tuesday, Northwood said it now has a total of 31 residents who have tested positive for COVID-19 along with 10 campus staff, four home support workers, and two health services staff.

It said 485 people live at its Halifax campus in two separate buildings.

The province has had three deaths as a result of COVID-19, the third confirmed late Monday by a long-term care home in Dartmouth.

In a statement, the Gem Health Care Group said the death occurred at the Admiral Long Term Care Centre.

Earlier, provincial health officials had said the man was in his 80s and was from the Halifax area.

To date, Gem said 10 staff and two residents have been exposed to the virus.

Bill Mont, 90, a resident of Northwood Terrace, an apartment building for seniors operated by Northwood, said word of the infection in the attached portions of the complex is deeply worrying to him.

"At my ripe old age I'd hoped to live a little bit longer and get my full life out here.... I'm very, very concerned about where this is going," said Mont, who is president of a residents' association in the complex.

Mont, also known in the city as the king of flea markets, said he would like to have more information from managers of the facilities about how the virus entered the campus.

"All of a sudden it's erupted here. It's the hot spot," said Mont.

An April 2 letter sent to Northwood residents by the medical director, Dr. Barry Clarke, and Josie Ryan, the director of long-term care, said medical staff at the facility were prepared to care for residents who become sick with COVID-19.

The medical leaders also said they'd follow guidelines from the Nova Scotia Health Authority on whether it's appropriate to transfer extremely ill residents to hospital.

"These guidelines will direct us when it might be appropriate for a resident to be evaluated for acute care assessment or treatment," they wrote.

The letter said medical teams were seeking an "open dialogue" with families, and invited them to "reach out to their care teams for more in depth discussion."

Meanwhile, the union that represents the continuing care workers at Northwood and other nursing homes in the province says it remains opposed to the province's position that some workers may be asked to return to work before the normal two-week quarantine after exposure to the virus is over.

During a briefing on Monday, Strang said the compromise was necessary because of potential staffing challenges if too many care workers were off sick.

"It's just not acceptable," she said, arguing the solution is for the province to make part-time workers full-time at affected facilities.

Staffing is a problem in facilities across most areas of Canada, and Suzanne Brake, Seniors' Advocate in Newfoundland and Labrador, had already been planning to thoroughly review staffing and care concerns in her province.

Brake said people were already in the dark about standards within the facilities before the pandemic.

"Families have no clue as to what's happening there now," Brake said. "That's why families are so worried."

- With files from Michael Tutton in Halifax and Holly McKenzie-Sutter in St. John's