HALIFAX — Hundreds of commercial fishermen protested at two wharves in southwestern Nova Scotia on Tuesday, over what they say is an illegal fishery in St. Marys Bay, continuing a long-standing dispute over fishing rights in the area.
Sep 15, 2020 5:35 PM By: Canadian Press 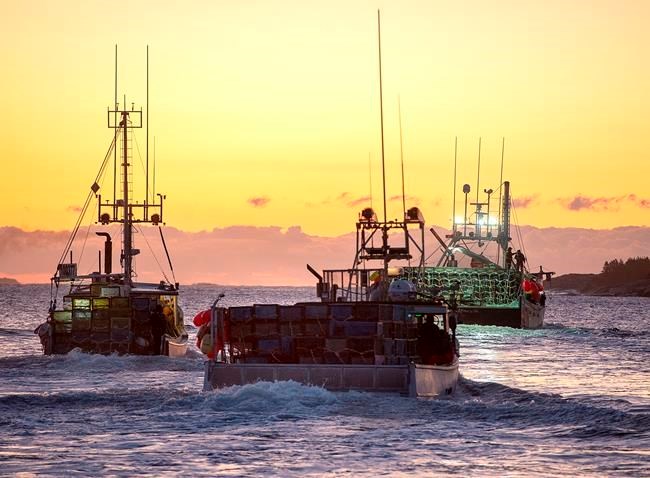 HALIFAX — Hundreds of commercial fishermen protested at two wharves in southwestern Nova Scotia on Tuesday, over what they say is an illegal fishery in St. Marys Bay, continuing a long-standing dispute over fishing rights in the area.

A communal First Nations lobster fishery in the region is being used illegally for commercial purposes, the fishermen allege. Federal regulations say no sales are allowed in a fishery outside the commercial fishing season.

The Mi'kmaq First Nations have denied the allegation, stating their right to fish for a moderate livelihood has been confirmed by a 1999 Supreme Court of Canada ruling.

But Bernie Berry of the Yarmouth-based Coldwater Lobster Association says the commercial lobster season in the region is officially closed and the First Nations fishery in St. Marys Bay is "out of control."

"We want to make the Department of Fisheries and Oceans enforce the regulations that are on the books," Berry said in an interview Tuesday. The federal government, he said, has been "ignoring this type of stuff for years."

Berry said the protests in Saulnierville and Weymouth were largely peaceful. At one point, however, there was a heated exchange between the protesters and a group of people who showed up at the Weymouth wharf, he said.

Earlier in the day, he said the fishermen blocked access to the wharf in Saulnierville by setting up a wall of lobster pots.

Tuesday's protest was one of several similar demonstrations by commercial fishermen over the past few years. In August, fishermen staged a protest outside the Bridgewater, N.S., constituency office of Fisheries and Oceans Minister Bernadette Jordan.

"At some point the government has to listen," Berry said. "Unfortunately it seems like we are forced to have these protests and rallies to highlight what DFO and some of the other government departments are not doing."

Colin Sproul, with the Bay of Fundy Inshore Fishermen's Association, said the issue is about the sustainability of lobster stocks, adding that commercial fishermen are not against the rights of Indigenous people to fish.

"We can all equitably share this resource but it needs to be done with sustainability first and foremost and not politics," Sproul said in an interview Tuesday. Protests will continue, he said, if the fishermen's concerns aren't addressed.

Mark Comley, DFO's area director for southwest Nova Scotia, said the department has been working closely with all parties to ensure safe access to the fishery and to decrease tensions in the area. The department is also monitoring fishing activities, he said.

"There is an increased conservation and protection presence in areas where this alleged unauthorized activity is taking place," he said in an interview Tuesday. "Gear is being inspected and seized when appropriate and at this time there are investigations ongoing."

Cheryl Maloney, consultation director for the Sipekne'katik First Nation, said the courts and Canadian laws recognize the right of the Mi’kmaq to fish and to trade.

Commercial fishermen have been using the same sustainability argument since the Supreme Court ruling 21 years ago, she said in an interview Tuesday.

"The Mi'kmaq fishery is legal," Maloney said. " ... and in regards to sustainability and conservation the lobster catches in Nova Scotia and the (lobster) populations are at an all-time high. They (fisheries) have been flourishing."

Maloney said fishermen from Sipekne’katik plan to fish on Thursday to mark the anniversary of the 1999 Supreme Court decision.