HALIFAX — Atlantic Canada's largest city will be subject to sweeping restrictions that stop just short of a full lockdown for the next two weeks as the province moves to head off a continuing surge in COVID-19 infections.
Nov 24, 2020 6:32 PM By: Canadian Press 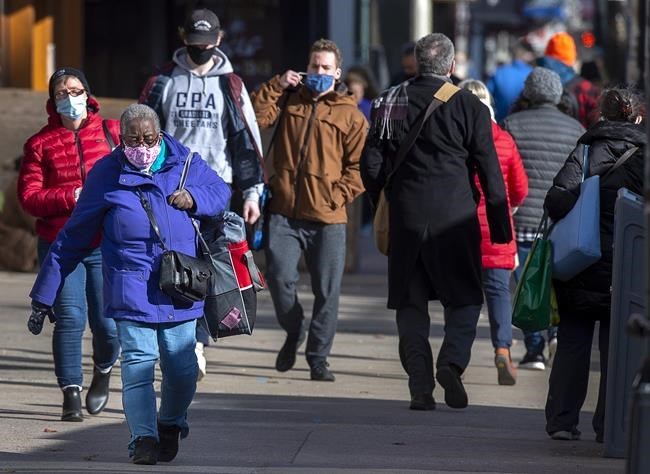 HALIFAX — Atlantic Canada's largest city will be subject to sweeping restrictions that stop just short of a full lockdown for the next two weeks as the province moves to head off a continuing surge in COVID-19 infections.

With a total of 87 active cases in the province, Premier Stephen McNeil said it was time for a public "wake-up call."

"There is no doubt that COVID is in our communities and it is trying to take a grip on the greater Halifax area," McNeil told reporters. "We need to stop the spread now."

The premier said the majority of the new cases involved people between the ages of 18 and 35, including a high school student at Northeast Kings Education Centre in Canning, N.S. The school will be closed for the remainder of the week, McNeil added.

The premier said the public gathering limit in Halifax will be reduced to five people, while mask-wearing will be mandatory, he said, in multi-unit residential buildings. Retail stores, meanwhile, will be required to limit shoppers and staff to 25 per cent or less of allowable capacity.

Organized sports and cultural activities are being put on pause, McNeil said, adding that travel by elite-level sports teams, including the Halifax Mooseheads of the Quebec Major Junior Hockey League, will be restricted.

Dr. Robert Strang, the chief medical officer of health, said there will also be an increased police presence in the city to prevent illegal gatherings. Violators of gathering limits face fines up to $1,000, he said.

As well, Strang said there would be no visitors allowed at long-term care facilities provincewide, with the exception of volunteers and designated caregivers. He said the measures are necessary with 67 new cases identified since Friday and 118 cases recorded so far in November.

Seventy-two per cent of cases reported in November involve people between the ages of 18 and 35, he said. "So, clearly we are on the second wave, it is focused here in (Halifax)," Strang said.

Young people are also driving the latest surge of COVID-19 cases in New Brunswick. The province reported five new cases on Tuesday, four of which involved people under the age of 30.

“You can break the chain of infections now spread in our province,” Russell said, directly addressing young people. “Children, teens and young adults are not immune to this disease and they can become gravely ill and suffer long-term damage to their health. And they can and do pass this virus to others who are less able to fight its effects."

As of Monday night, seven schools in the Saint John and Fredericton regions had confirmed infections, as did two of the province’s childcare centres.

Meanwhile, Newfoundland and Labrador reported two new cases in its eastern health region, a day after the province temporarily pulled out of the Atlantic bubble, which allowed interregional travel without 14-day quarantine requirements.

Officials also issued an advisory to rotational workers about a COVID-19 outbreak at the LNG Canada project site in Kitimat, B.C.

Back in Nova Scotia, the province announced a special testing strategy aimed at patrons and employees of late-night bars and restaurants — even if they don't have symptoms of the illness. Health officials said anyone who works in a licenced establishment or who went to a bar or restaurant in Halifax after 10 p.m. in the last two weeks should book a COVID-19 test.

— With files from Sarah Smellie in St. John's.

Families say everything possible should be done to recover bodies from sunken boat
Jan 18, 2021 4:20 PM
Comments