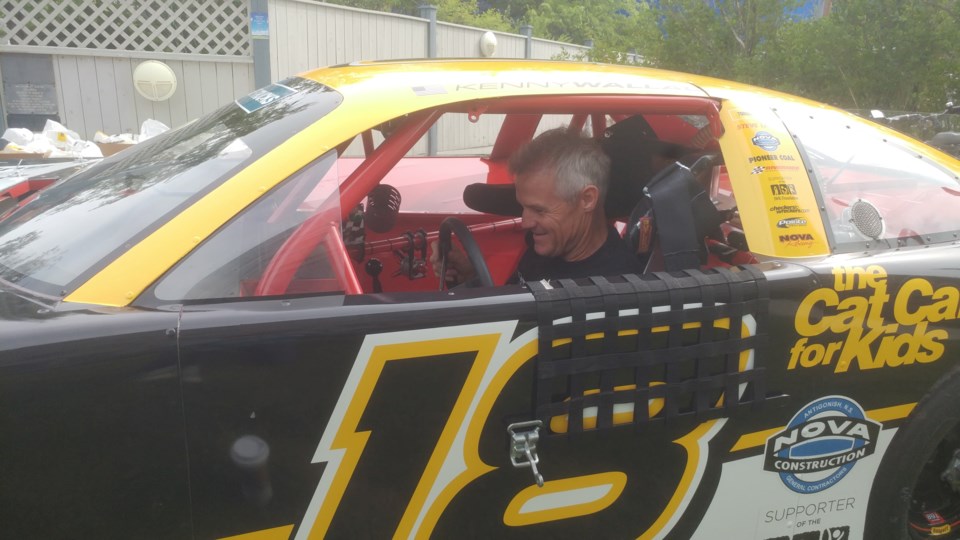 Kenny Wallace at the IWK Children's Hospital in Halifax.

The defending winner of one of Canada's most prestigious stock car races is returning to defend his title.

Former NASCAR driver and short track legend, Kenny Wallace will race for the second year in a row at the IWK 250 in James River, Nova Scotia.

Wallace says he enjoyed his time at the race last year, which he won after the top two drivers were disqualified for illegal carburetors

A personal highlight for Wallace, however, was a visit to the IWK Children's Hospital in Halifax

"I had just a wonderful time at that hospital," Wallace said. "The kids just enjoyed the heck out of seeing the car and taking pictures; it was a real honour."

Wallace will be driving a car out of the Nova Racing stable, and is looking forward to interacting with fans.

"It's such a beautiful country, and such a fun trip for me," he said. "You got the rematch, the fans are good to me, and the partying is fun. Man, I'm coming back!"

Weekend tickets are on sale for the IWK 250 Super Race Weekend, which kicks off on Wednesday, July 17th.

Testing will be held on Wednesday and Thursday, and support races will run on Friday.

Atlantic region warned about weekend gatherings and possible viral surge
Apr 7, 2020 5:12 PM
Comments
We welcome your feedback and encourage you to share your thoughts on this story. We ask that you be respectful of others and their points of view, refrain from personal attacks and stay on topic. To learn about our commenting policies and how we moderate, please read our Community Guidelines.