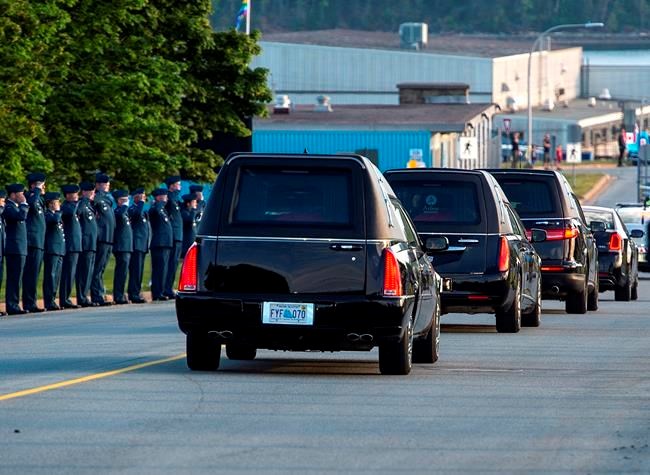 As the motorcades left Halifax Stanfield International Airport, one group of vehicles headed south to the Halifax area and another to Truro, which is 45-minute drive to the north.

The remains of three members of the Royal Canadian Air Force: Capt. Brenden MacDonald, Capt. Maxime Miron-Morin and Master Cpl. Matthew Cousins, were taken to a funeral home in Dartmouth, following a procession that travelled through the 12 Wing Shearwater military airbase on the east side of Halifax harbour.

Sub-Lt. Matthew Pyke's remains were to be taken to a funeral home in Truro, his hometown. Pyke served as a naval warfare officer with the Royal Canadian Navy.

As the sun went down after a hot and humid day, hundreds of people lined the route through the Halifax area, many of them in shorts and T-shirts, holding Canadian and Air Force flags. At the funeral home in Dartmouth, three flag-draped coffins were carried inside as a military pipe band played.

The helicopter carrying the military members — a relatively new CH-148 Cyclone — crashed off Greece on April 29, killing all six people aboard.

A ceremony for Capt. Kevin Hagen will be held in Victoria on Saturday. The Royal Canadian Air Force pilot was originally from Nanaimo, B.C.

A funeral procession for 23-year-old Sub-Lt. Abbigail Cowbrough, a Royal Canadian Navy marine systems engineering officer originally from Toronto, was held May 11 in the Halifax area. Her remains were found in the Mediterranean Sea shortly after the crash.

The crash marked the largest loss of life in one day for the Canadian Armed Forces since six Canadian soldiers were killed in a roadside bombing in Afghanistan on Easter Sunday 2007.

Earlier this month, the military said preliminary findings indicated the helicopter did not respond the way the crew expected as the aircraft was coming around to land on the Canadian frigate HMCS Fredericton, which is based in Halifax.

They say the pilot attempted to make a number of manoeuvres while the Cyclone's "flight director,'' or autopilot, was still engaged.

Rather than turning off, the autopilot started to work against the human pilot before the helicopter crashed into the water at high speed.

The investigation also confirmed this "rare anomaly only occurred under a very specific and narrow set of circumstances."

The crew would have had no previous experience with this type of situation, investigators said.

The Cyclone was deployed aboard the Halifax-class frigate as part of a NATO mission patrolling the Mediterranean and Black seas.

On June 3, the Canadian Armed Forces ended its mission to retrieve the wreckage of the helicopter, known as Stalker 22.

At the time, Maritime Component commander Rear Admiral Craig Baines said crews had recovered "the important pieces ... that were necessary for the investigation."

The wreckage was found at a depth of 3,143 metres.

The recovery effort required the use of a U.S. Navy drone launched from a civilian supply ship. It wrapped up after eight days of operations.