Most ships in Cabot Strait not complying with whale-protection rules: study

HALIFAX — A study of ship speeds in the Cabot Strait shows that two-thirds are not complying with a voluntary speed restriction meant to protect critically endangered North Atlantic right whales that migrate through the area.
Jul 21, 2020 1:00 PM By: Canadian Press 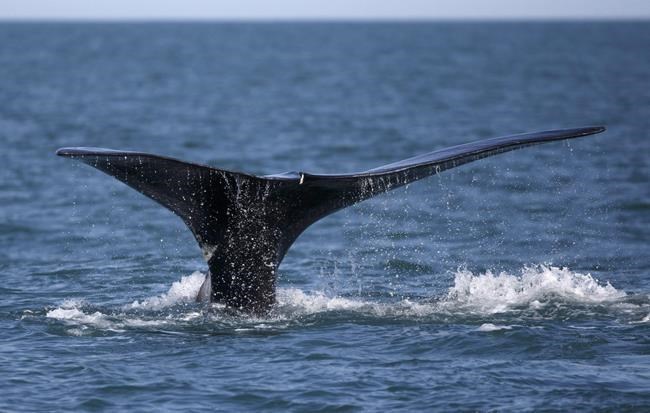 HALIFAX — A study of ship speeds in the Cabot Strait shows that two-thirds are not complying with a voluntary speed restriction meant to protect critically endangered North Atlantic right whales that migrate through the area.

Advocacy group Oceana Canada has released a study today indicating that between April 28 and June 15 this year, 67 per cent of vessels — 464 out of 697 studied — were travelling in the Cabot Strait faster than the requested 10-knot limit.

It says when a ship travelling above that speed strikes a whale, there is little chance the animal will survive.

The organization says in its study that it's clear that the federal trial allowing the speed reduction to be voluntary isn't working.

It says the Cabot Strait slowdown should be made mandatory to protect the whales from ship strikes, "before it is too late."

Kim Elmslie, director of the right whale campaign, said that while she appreciates Transport Canada wanted the slowdown measure as a trial this year, the whales are running out of time.

"We were shocked by the high level of non-compliance," she wrote in an email.

Oceana Canada has requested that Ottawa make the slowdown measure in the Cabot Strait mandatory as of Oct. 1, when a second period of the speed restriction is set to begin.

The Cabot Strait, which runs between Cape North, N.S., and Cape Ray, N.L., is an essential corridor for North Atlantic right whales migrating to the Gulf of St. Lawrence, where they feed on small crustaceans.

Transport Canada introduced the voluntary measure this year as one of several measures aimed at protecting the species, of which there are only about 400 animals remaining.

The speed restriction on vessels longer than 13 metres was in place from April 28 to June 15, the period when the whales typically enter the Gulf of St. Lawrence. The 10-knot limit — the equivalent of 18.5 kilometres per hours — is to be restored between Oct. 1 and Nov. 15, another migration period.

The right whales first appeared in Canadian waters this year in early May, prompting a temporary closure of fixed-gear fisheries under the new federal rules to protect the whales.

Since 2017, 30 right whales have died in waters off Canada and the United States, with two-thirds of the deaths in Canadian waters.

Ship strikes are the most common causes of death, when a cause can be determined, and fishing entanglements have also killed several of the animals.

Changes to right whale protections were announced in February, with federal officials noting that the whales' movements in Canadian waters have become difficult to predict.

The whales also feed close to the surface and do not vocalize the same way as other whales — all evolutionary disadvantages against large ships that Elmslie said make it necessary to take all possible precautions.

Oceana Canada's study does not include all vessels, because not all are required to use automatic identification systems tracking their voyages in Canadian waters.

"We know slower speeds mean that ship strikes are less likely to be fatal, and we know that mandatory speed zones have high compliance," she wrote.

"We need to do everything we can to stop the North Atlantic right whale from going extinct in our lifetimes, and making this slowdown zone mandatory is one thing that the minister of transportation can do, now."