Memorial to N.S. mass shooting victims to be removed, partly to deter gawkers

HALIFAX — Four months after a gunman killed 22 people in rural Nova Scotia, residents of the village where the shooting started have decided to dismantle a makeshift memorial outside a former church, partly because the roadside shrine continues to at
Sep 1, 2020 3:50 PM By: Canadian Press 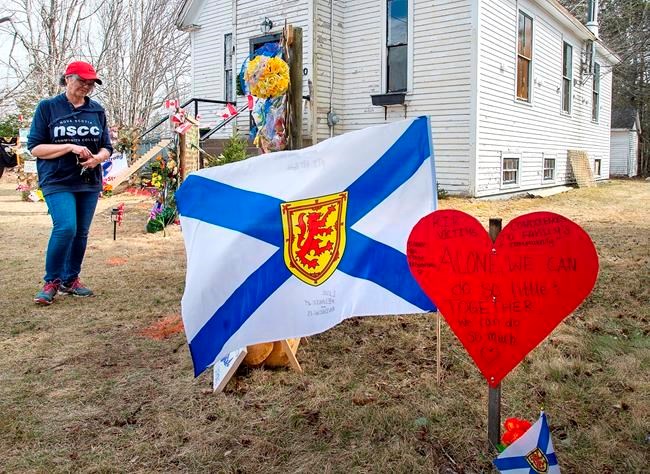 HALIFAX — Four months after a gunman killed 22 people in rural Nova Scotia, residents of the village where the shooting started have decided to dismantle a makeshift memorial outside a former church, partly because the roadside shrine continues to attract unwanted gawkers.

The councillor for the Portapique area, Tom Taggart, said Tuesday the memorial — festooned with flowers, cards, posters and stuffed animals — will be removed this weekend.

He said residents have grown weary of vehicles stopping at the church and then heading to nearby Portapique Beach Road, the neighbourhood where the lone shooter killed 13 people on April 18 before murdering nine others the next day in several other communities in northern and central Nova Scotia.

"It has just gotten to be too much for the residents," Taggart said in an interview, noting that a smaller memorial at the entrance to the neighbourhood was removed in May.

"They've been very patient and understand the need for people to grieve. But at the end of the day, it has to stop. It is still very traumatic and very raw, not only the families of the victims, but also the families that lived through the horror that night."

Some residents have said they feel like they're living in a fish bowl. Others have posted signs pleading for privacy.

One neighbour told Taggart that 187 vehicles had cruised past her home one evening a few months ago.

"She was working in her yard and she just went in and shut the door," Taggart said. "The memorial has served a great purpose. But the memorial and the traffic on Portapique Beach Road go hand in hand ... It really is time to put this behind us."

Taggart said traffic through the neighbourhood was particularly heavy this past weekend.

"At least one person became very worn down and distraught — and I started receiving phone calls," he said. "When you receive calls from people who are crying because they can't get this behind them, it's time for somebody to take action."

On Monday night, during a service for one of the families, Taggart asked one relative if it was time to remove the memorial.

"The answer was, 'It can't come down soon enough.'"

Tiffiany Ward, the head of a volunteer group that is planning to establish a permanent memorial, said the lurid fascination of some sightseers has tried the patience of grieving residents.

"People travelling down Portapique Beach Road, that is just not necessary," Ward said. "There is nothing there. There is no reason ... other than a morbid tourist attraction."

Consultations with the community, she said, have confirmed the memorial has become a constant reminder of unimaginable violence.

"They have to drive by it every day," said Ward, a resident of nearby Economy, N.S., and chairwoman of the Nova Scotia Remembers Legacy Society. "It's a reminder that something terrible happened to them."

On a more practical level, residents have said the many personal mementoes at the church — delivered from across Canada — should be preserved before winter sets in, she said.

The long-term goal for Ward's group is to create one or several permanent memorials, but that won't happen without the community's blessing.

"We hope we can create something tasteful in the future, when the families are ready," she said.

This report by The Canadian Press was first published Sept. 1, 2020.