HALIFAX — Actor and director Taylor Olson hadn't imagined when he set out to make a film that depicts isolation and broken hopes that his final cut would emerge during a pandemic when many are experiencing similar emotions.
Sep 9, 2020 1:29 PM By: Canadian Press 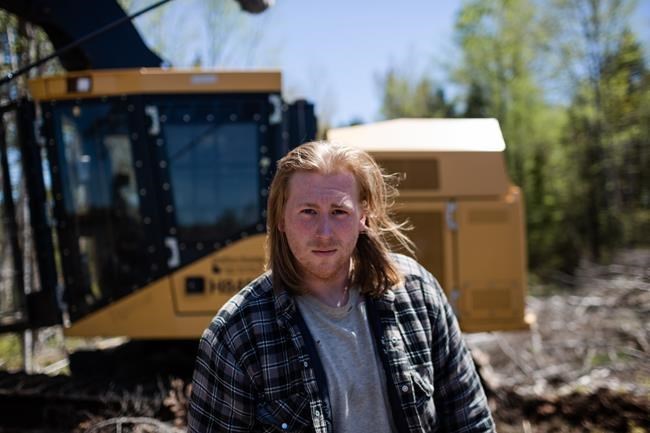 HALIFAX — Actor and director Taylor Olson hadn't imagined when he set out to make a film that depicts isolation and broken hopes that his final cut would emerge during a pandemic when many are experiencing similar emotions.

The 28-year old has completed a cinema version of playwright Catherine Banks' "Bone Cage," the story of a young man who clear cuts the local forest, pausing to mourn the dead and injured creatures found amid the debris.

"We feel that grief, individually and collectively, in society right now," the Halifax-based director said in a recent interview.

The 87-minute movie, being streamed online in film festivals this fall, tells the story of Jamie, who runs a wood-processing machine in the forests surrounding his East Coast community.

"When you walk into a clearcut and look at it, it is lonely and kind of terrifying," Olson says.

Recently engaged to Krista, Jamie — played by Olson — dreams of a future as a helicopter logger in British Columbia.

However, his goals are thwarted by a lack of high school math and access to credit to pay for training.

The circumstances of his entrapment include a distant and distraught father, damaged by the death of another son and unable to offer Jamie financial or emotional aid.

Meanwhile, Krista, who has yet to fully realize her future husband's despair, is satisfied to remain in the town, believing their "me-and-you babe" bond will conquer all.

Near the end of the movie, Jamie sees he's been simply fooling himself, telling his sister, "I'm a clown."

"Even in the way we shot the film, we're trying to isolate Jamie," Olson said in an interview.

The movie shows Jamie repeatedly trying to feed a red-tailed hawk he's rescued, but the bird coldly rejects the offering.

"There is nobody around him who understands how much it hurts him personally," said Olson.

The director says he is personally familiar with logging, coming from a family that moved around northern British Columbia and the Queen Charlotte Islands in the forestry industry.

However, Olson says Jamie's story is not an autobiography, and his own life of late hasn't been one of thwarted dreams.

His relatives have loved and supported him in his life as an artist, he said, and he's recently receiving funding from Telefilm Canada and the Canada Council for fresh projects.

"Jamie's story isn't mine, but rather the story of those I've known and I've loved .... It's their story I wanted to tell."

Still, the challenges for promoting debut films made by independent filmmakers are daunting amid COVID-19, as even small festivals cut back the number of showings and audiences have shifted online.

"It's harder to get into them, though the up side is when you play at the festival, you're more prominent and one of the few," said Olson.

"Bone Cage" was funded by Telefilm Canada's talent fund program for first-time filmmakers and cost about $187,000 to produce.

All showings are online.

This report by The Canadian Press was first published Sept. 9, 2020