Halifax area restaurant, Island food producers reach out to those in need

HALIFAX — A popular Halifax area restaurant that shut down nearly a month ago is firing up its stove burners again, temporarily reinventing itself as a community kitchen to support groups providing food for those in need during the COVID-19 crisis.
Apr 12, 2020 3:29 PM By: Canadian Press 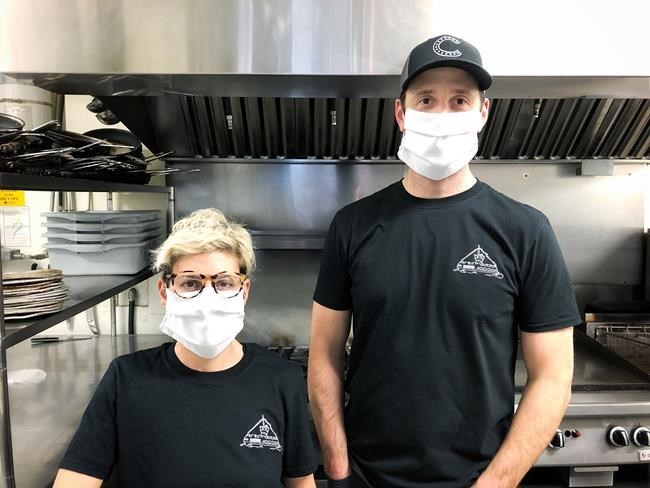 HALIFAX — A popular Halifax area restaurant that shut down nearly a month ago is firing up its stove burners again, temporarily reinventing itself as a community kitchen to support groups providing food for those in need during the COVID-19 crisis.

The Canteen in downtown Dartmouth, N.S., is teaming up with the Dartmouth North Community Food Centre and Margaret's House, run by Feeding Others of Dartmouth Society, and plans to prepare 300-400 meals per week beginning Monday.

Renee Lavallee, who co-owns the restaurant with her husband Doug Townsend, said they were looking for a way to help the community since temporarily closing in mid-March and laying off the majority of their 30 employees.

Lavallee said the couple has had an ongoing relationship with the Dartmouth Food Centre in particular, so it was a natural fit to have their idle kitchen help that organization with its food program.

"We're good, we're healthy, so we decided let's take care of the people in the community that we see on a daily basis who can't go to the grocery store, or get meals," said Lavallee.

She said the restaurant was able to retain five workers who will assist in preparing and packaging meals that will then be delivered by the community organizations, which are running short on food and the ability to prepare it.

"You can't prepare 400 or 500 meals with just four people in the kitchen so we told them that we would gladly take the bulk of what they can't do," Lavallee said.

The prepared meals will range from macaroni and cheese and vegetables, to stew, chicken and rice, meatballs and meatloaf.

"Just stuff that you can easily heat up in the microwave . . . and has enough nutrition to keep you going," said Lavallee.

She said the plan is to help Margaret's House, named after the wife of former Nova Scotia Premier John Savage, with its meals on Fridays, which is that organization's busiest day.

Lavallee said The Canteen also hopes to partner in the future with other like-minded businesses to find ways to help support the initiative.

She said her restaurant found inspiration for the idea from chefs and restaurants that have "stepped up" across the country.

"We see people in Toronto and Vancouver doing it and we would like to see other restaurants come on board."

The idea of helping those in need was also the inspiration over the Easter weekend for an initiative in Prince Edward Island that saw the provincial government team up with the Island's potato and dairy producers to provide care packages for families in need.

Drive-thru locations were set up Saturday in Charlottetown and Summerside, P.E.I., where people were provided with a 4.5-kilogram bag of potatoes, a two-litre jug of milk and a block of cheese.

Jamie MacPhail, of Amalgamated Dairies Ltd., said each location had 1,500 packages of food that were quickly snapped up.

"There were three-thousand Islanders and there was demand for much more than that," he said.

As a result, MacPhail said it looks like the initiative will continue into the future, with the possibility of more locations planned for as early as next weekend.

He said while dairy farmers are continuing to work, the market demand has declined during the pandemic, and programs like this one give at least one incentive for some farmers to keep producing.

Greg Donald, of the P.E.I. Potato Board, said it's fitting that farmers are continuing to contribute in a province that has such strong ties to agriculture.

"Agriculture on P.E.I. and across the country are having our challenges," said Donald. "We are all affected by this one way or another so it was nice to give something back."

This story by The Canadian Press was first published April 12, 2020.

Hurricane Teddy expected to push dangerous storm surge toward Nova Scotia
Sep 22, 2020 9:34 PM
Comments
We welcome your feedback and encourage you to share your thoughts. We ask that you be respectful of others and their points of view, refrain from personal attacks and stay on topic. To learn about our commenting policies and how we moderate, please read our Community Guidelines.