HALIFAX — Capt. Jennifer Casey died while supporting an important mission that seemed "designed for her," her family said Wednesday in their first public statement since the Snowbirds aerobatic team member was killed in a plane crash on Sunday.
May 20, 2020 4:50 PM By: Canadian Press 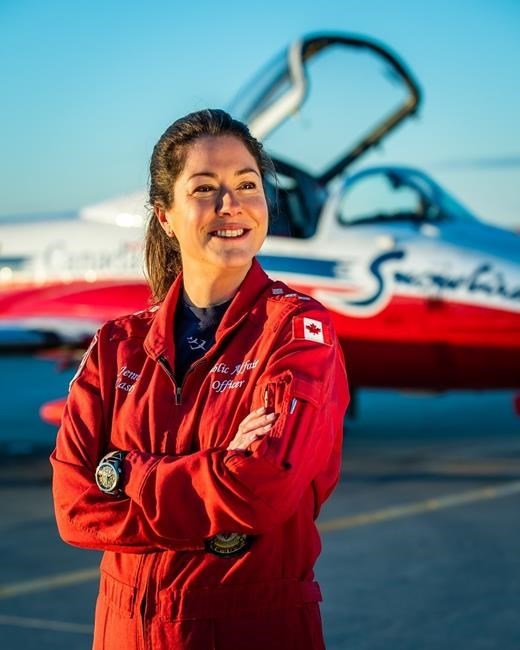 HALIFAX — Capt. Jennifer Casey died while supporting an important mission that seemed "designed for her," her family said Wednesday in their first public statement since the Snowbirds aerobatic team member was killed in a plane crash on Sunday.

The 35-year-old Casey, a military public affairs officer and Halifax native, died in the crash of a Snowbirds Tutor jet in a residential area of Kamloops, B.C.

In a statement read Wednesday by honorary Lt.-Col. Corrine MacLellan, Casey's family said the Snowbirds' cross-country morale tour aimed to reassure Canadians in a time of uncertainty, and there was "no better person to carry out that mission than Jenn."

"Her beautiful smile and positively infectious personality could brighten anyone's day," the family's statement said. "She proudly served the mission as she flew across our great nation with a team that she adored."

Her family said the former journalist was more than a granddaughter, daughter, sister and friend to many.

"She was a storyteller — a role that she embraced with a passion and skill. She was also a proud Nova Scotian who served as an advocate and ambassador for her province. Her journey took her many places, but her heart was always at home in Halifax."

"As she makes her way back to Nova Scotia to her final resting place, we ask those who knew and loved Jenn to cherish the memories that you have of her. She is gone but she will never be forgotten."

Casey died after ejecting from the stricken aircraft. The jet's pilot, Capt. Richard MacDougall of Moncton, N.B., survived the crash, which occurred shortly after takeoff. He is being treated for injuries the military and his family have said are not life-threatening.

A team of military investigators is trying to determine the cause of a crash the aerobatic team's commander has described as a confluence of "worst-case scenarios" and "our absolute worst nightmare.''

The tour, known as "Operation Inspiration," has been suspended while the team's jets have been placed on "operational pause.''

The crash was the second since October, when one of the team's planes crashed while on tour in the U.S. state of Georgia. The pilot in that incident sustained only minor injuries.

Casey was an accomplished student, earning a bachelor of arts from Dalhousie University and a bachelor of journalism from the University of King's College in Halifax, as well a master's of interdisciplinary studies from Royal Roads University in Victoria.

She joined the military as a direct entry officer in August 2014. Before being assigned to the Snowbirds in 2018, Casey spent most of the year with the CF-18 demo team travelling around North America and the United Kingdom.

Before her career in the Armed Forces she worked as a radio reporter, anchor and producer in Halifax and in Belleville, Ont.

Her first full-time position was as a producer for Rick Howe's talk show on News 95.7 in her hometown.

The veteran broadcaster said while it was only for a "couple of years," Casey stood out to him like few others had.

"She remains in my mind as someone I'll always remember," said Howe. "I've worked with a lot of people over the nearly 50 years I've been doing this ... there's a small select number that really stood out as being unforgettable characters and Jennifer was one of them."

Howe said the pair worked closely together in what was only a two-person operation. He said in that situation you get to know people "a whole lot better."

"Jenn was just someone you loved to have around," he said. "Not only was she articulate and smart and engaging, she was just a nice, friendly person and I miss her."

This report by The Canadian Press was first published May 20, 2020.