HALIFAX — Another First Nation is starting a self-regulated fishery in Nova Scotia even though it suffered backlash from the decision of the Sipekne'katik First Nation to harvest lobster outside the federally regulated fishing season.
Oct 27, 2020 4:23 PM By: Canadian Press 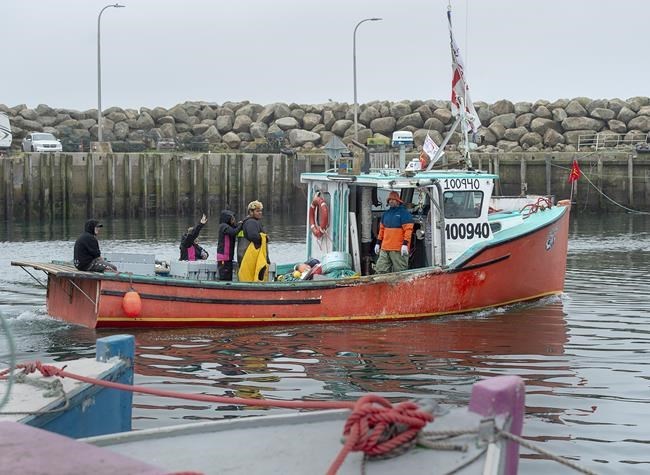 HALIFAX — Another First Nation is starting a self-regulated fishery in Nova Scotia even though it suffered backlash from the decision of the Sipekne'katik First Nation to harvest lobster outside the federally regulated fishing season.

Chief Carol Dee Potter of the Bear River First Nation issued a statement Monday saying no one consulted her band before Sipekne'katik members launched an out-of-season fishery Sept. 17, prompting a series of violent protests and vandalism by non-Indigenous agitators.

"Over the last few weeks, our fishers have been forced out of this area due to the ongoing dispute," Potter said. "It is hard to see how any way forward can be developed ... when so many are intent on escalating the situation on St. Marys Bay."

The chief of the Sipekne'katik First Nation, Mike Sack, said he was glad to hear Bear River was organizing its own self-regulated fishery on the same bay.

But Potter said Sack's band has caused collateral damage in the past month.

She said her band had worked tirelessly to repair relationships with non-Indigenous communities after the Supreme Court of Canada ruled in 1999 that Indigenous groups in the Maritimes and Quebec have a protected treaty right to fish, hunt and gather -- without a licence -- to earn a moderate livelihood.

That court decision sparked violent clashes in 1999 and 2000 after some Indigenous bands started asserting their rights in New Brunswick and Nova Scotia.

"All that work over the past decades is quickly being eroded by others who will soon leave this area, leaving us to pick up the pieces," Potter said.

Potter said her community is closer to St. Marys Bay than any other First Nation in southwestern Nova Scotia. The Sipekne'katik band is based inland, north of Halifax, about 250 kilometres east of the bay.

Like most other Mi'kmaq First Nations, Bear River has its own communal commercial lobster fishery, and it regularly takes part in a food, social and ceremonial fishery, which is not a commercial enterprise. Both fisheries were set up with Ottawa's help after the landmark 1999 court ruling.

Chief Potter is calling for discussions about the moderate livelihood fisheries with the federal government, neighbouring Mi'kmaq communities and with non-Indigenous fishers.

"We are very concerned that we are not part of any discussions that involve the health and sustainability of resources in our own backyard," the chief said. "Bear River First Nations' obligations of stewardship are obligations we owe to the Creator. This has always been the Mi'kmaq way."

Some non-Indigenous commercial fishers have argued the Supreme Court ruling was followed up by a clarification that said federal officials can regulate Indigenous fisheries to conserve stocks, so long as Ottawa can justify its actions.

Meanwhile, the Sipekne'katik First Nation announced Tuesday it had found a buyer for a portion of its catch, despite Sack's earlier assertions that local buyers and suppliers were refusing to deal with the band because of the ongoing controversy.

Sack says the 6,300 kilograms of lobster caught by the band's communal commercial fishing fleet in the Bay of Fundy is probably worth $150,000. He said the new buyer, whom he declined to name, won't be purchasing lobster harvested from St. Marys Bay by the band's moderate livelihood fishery.

In the five weeks since that fishery was launched, two lobster pounds handling Sipekne'katik lobster have been targeted by vandals, with one damaged and the other destroyed by fire.

Last Wednesday, the band obtained a court injunction prohibiting anyone from threatening or harassing band members involved in the fishery or people doing business with them.

Also last week, a potential buyer for Sipekne'katik's lobster came forward and then withdrew, saying his company was concerned it could not distinguish between the lobster caught under federal fisheries licences or the lobster caught in the moderate livelihood fishery.

The provincial government regulates the sale of lobster by granting licences to approved lobster buyers. Sack said the band is looking for an exemption for the moderate livelihood fishery, but he said the province hasn't responded.

Premier Stephen McNeil has said the province is awaiting the completion of nation-to-nation negotiations between Ottawa and the band to define moderate livelihood fisheries.

Sack also said the band is grateful for offers from businesses and citizens to purchase its lobster.

"Restaurant owners, chefs, seafood brokers and Canadians far and wide have approached us with sincere and creative proposals," he said in a statement. "That has meant so much to my community. This is the Canada we know."