OTTAWA — Prime Minister Justin Trudeau's admission Friday that he might have to improve the vetting for high-level appointments sparked criticism over why he didn't figure that out before he chose Julie Payette as governor general.
Jan 22, 2021 7:00 PM By: Canadian Press 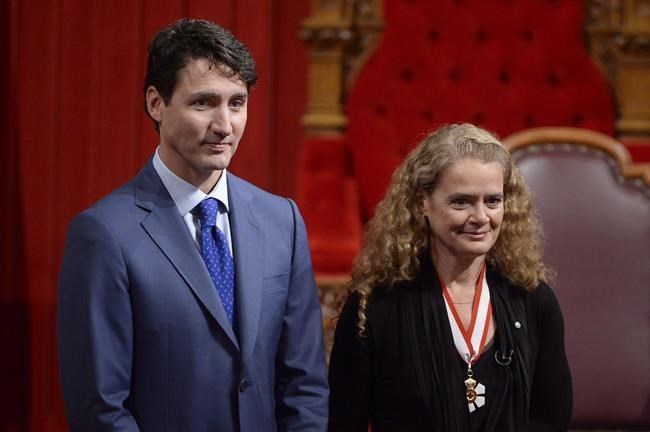 OTTAWA — Prime Minister Justin Trudeau's admission Friday that he might have to improve the vetting for high-level appointments sparked criticism over why he didn't figure that out before he chose Julie Payette as governor general.

Trudeau named the former astronaut as Canada's 29th governor general in 2017 after disbanding a non-partisan, arm's-length committee created by the previous Conservative government to recommend worthy nominees for viceregal posts.

Thursday, she resigned over allegations she created a toxic work environment at Rideau Hall, an unprecedented move for a monarch's representative in Canada.

Trudeau faced questions Friday about his judgment and his government's failure to check with Payette's former employers at the Montreal Science Centre and the Canadian Olympic Committee, where she faced similar allegations of harassing and bullying subordinates.

"We will continue to look at the best way to select people for viceregal appointments," Trudeau told a news conference Friday outside his residence at Rideau Cottage. "It's an important role for Canadians and we will look at how we can improve it."

But Trudeau would not commit to reinstating the non-partisan, arm's-length committee to choose her successor.

Payette announced her resignation about a week after the government received the damning findings of an independent investigation into allegations of harassment and other workplace issues at Rideau Hall.

Trudeau said he spoke with the Queen by telephone Friday to inform her that Canada's Chief Justice Richard Wagner is stepping in until a new governor general is named.

A Buckingham Palace spokesperson said earlier that the Queen was being kept informed and will leave the matter in the hands of the Canadian government.

Trudeau said everyone deserves a safe and healthy workplace, including employees at Rideau Hall. He said the work they have done has been "exceptional." But he deflected a question over whether he owed those employees and all Canadians an apology.

"This was a case where they did not consult. This was likely bounced around in the PMO. And there was zero verification or due diligence. And, unfortunately, we see the results," O'Toole said in an interview.

NDP Leader Jagmeet Singh said the choice of Payette was one of style over substance.

"Really it comes down to Justin Trudeau, who was more interested in a flashy announcement of a governor general rather than doing the work of making sure it was the right selection," Singh said Friday.

"And it seems to be an ongoing trend, this pursuit of a flashy headline instead of working to get the job done."

"During these uncertain and devastating times, we are in critical need of leaders who are skilled at connecting to people in meaningful ways — building unity, allaying concerns, and showing empathy," she said.

"The days are over when leaders could skimp on emotional intelligence and building relationships. Employees are demanding more from their leaders."

Trudeau's minority Liberal government could be defeated at any time and, were that to happen, it would fall to the governor general to decide whether to call an election or give O'Toole a chance to see if he can command the confidence of the House of Commons.

Intergovernmental Affairs Minister Dominic LeBlanc said Thursday the government has begun discussions with those responsible for vetting, but the prime minister hasn't had time yet to reflect on the best way to choose Payette's successor. The government will have more to say on that likely next week, he said.

LeBlanc said the government report came to "compelling" and "stark" conclusions and agreed that Payette's tenure shows that the vetting system for such appointments needs to be strengthened.

"There always has been a process of vetting, of checks that are made when somebody is appointed to any government job. But clearly, the process can be strengthened, can be improved," LeBlanc said in an interview shortly after Payette's resignation.

The government does not intend to release the report due to privacy issues and the promises of confidentiality made to all complainants, LeBlanc said. It will instead release a redacted version of the report in response to requests made under the Access to Information Act.

LeBlanc would not discuss the contents of the report, but said it found Rideau Hall "was obviously an unacceptable workplace."

LeBlanc said federal public servants "have the right to a secure, safe and healthy workplace and we are adamant … that standard be upheld at every institution of the government of Canada."

He said the report "painted a picture that was not consistent" with that standard.

The Canadian Taxpayers Federation called on Trudeau to stop paying the expenses of former governors general after they have left office.

Former governors general also qualify for a pension of more than $140,000, the federation said.

"Two years ago, the prime minister said he would review this program," said the group's director, Aaron Wudrick. "Nothing has happened since. It's time to save taxpayers money by scrapping this outrageously wasteful program."

The Senate recently agreed to pay $498,000 in compensation to nine former employees of ex-senator Don Meredith, who was accused of sexually harassing, belittling and humiliating his staff.

LeBlanc said there's been no consideration thus far — and no mention in the report — of paying compensation to Rideau Hall employees, some dozen of whom complained anonymously to the CBC about Payette yelling at, belittling and publicly humiliating staff, reducing some to tears and prompting some to quit.

He said such questions will be handled by senior federal officials, who are planning to talk with all employees at Rideau Hall to plan next steps.