Premiers' throne speech wish list and a drop in vaping: In The News for Sept. 18

In The News is a roundup of stories from The Canadian Press designed to kickstart your day. Here is what's on the radar of our editors for the morning of Sept. 18 ... What we are watching in Canada ...
Sep 18, 2020 5:15 AM By: Canadian Press 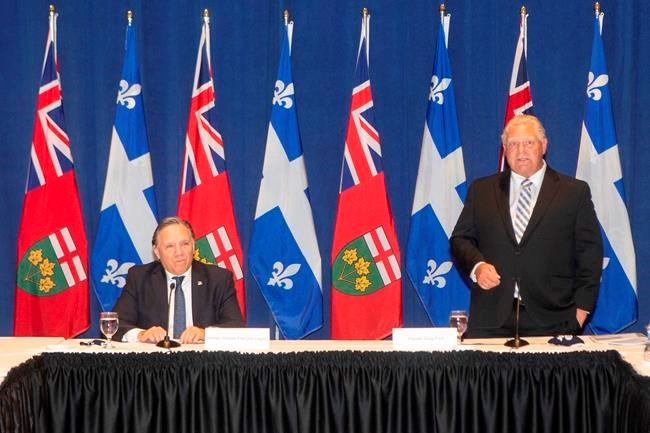 In The News is a roundup of stories from The Canadian Press designed to kickstart your day. Here is what's on the radar of our editors for the morning of Sept. 18 ...

What we are watching in Canada ...

OTTAWA — Four conservative-minded premiers are to issue today their wish list for next week's throne speech on which the fate of Justin Trudeau's minority Liberal government could hinge.

Quebec's Francois Legault, Ontario's Doug Ford, Alberta's Jason Kenney and Manitoba's Brian Pallister plan to hold a news conference in Ottawa to spell out what they hope to see in the speech.

Billions more for health care is likely to top their list.

Ford and Legault last week called on Ottawa to significantly increase the annual federal transfer payments to provinces and territories for health care.

The transfer this year will amount to almost $42 billion under an arrangement that sees it increase by at least three per cent each year.

On top of that, the federal government is giving provinces and territories $19 billion to help them cope with the fallout from the COVID-19 pandemic, including some $10 billion for health care.

ALBERTON, P.E.I. — The military says it has suspended its search for two teens who were reported missing when their small boat capsized Wednesday night off the coast of Prince Edward Island.

"Regrettably, based on the results of the search over the last 20+ hours, a search covering over 14.5 sq km by sea and air, and the environmental factors, the search for the two missing 17 year olds has been suspended," the Maritime Joint Rescue Co-ordination Centre in Halifax said Thursday in a post on Twitter.

Lt.-Cmdr. Brian Owens of the rescue centre said the ships and aircraft involved in the search were returning to their bases.

Earlier Thursday, Northport, P.E.I., Mayor Wendy McNeill said residents from the West Prince area were using everything from fishing boats to kayaks to help look for the boys.

"Anybody that can get on the water for any reason whatsoever, they're out there," McNeill said in an interview. "It's just unbelievable to see the amount of people out there searching."

The rescue co-ordination centre said another young man was on the boat and made it back to shore Wednesday night, placing a 911 call at 9:28 p.m.

Owens said a Cormorant helicopter was immediately dispatched to the scene off Fox Island, near Alberton, P.E.I., and it was joined by several coast guard vessels and a C-130 Hercules aircraft.

He said the military made the decision to suspend the search after assessing the survivability of being in the water that long and drift patterns.

MINNEAPOLIS — U.S. President Donald Trump almost won Minnesota in 2016 and sees it as a state he can peel away from Democrat Joe Biden in November.

That could potentially help insulate him in case he loses any battlegrounds that backed him four years ago.

But Minnesota, which hasn't voted Republican in a presidential race since 1972, has steadily moved farther away from the president since then.

And polls suggest Biden has built a consistent lead as both he and Trump visit the state today, when early voting opens.

What we are watching in the rest of the world ...

JERUSALEM — Israel is set to go back into a full lockdown to try to contain a coronavirus outbreak that has steadily worsened for months as its government has been plagued by infighting.

The three-week lockdown, beginning at 2 p.m. local time today, will include the closure of many businesses, strict limits on public gatherings, and will largely confine people to within a of their homes.

The closures coincide with the Jewish High Holidays, when people typically visit their families and gather for large prayer services.

Prime Minister Benjamin Netanyahu has warned that even stricter measures may be needed to prevent hospitals from being overwhelmed.

Shania Twain won in five of the seven categories in which she was nominated at the Canadian Country Music Awards in Hamilton. The Timmins, Ont., singer took the honours for Female Vocalist of the Year, as well as Best Single and Video for "Any Man of Mine" and Album of the Year for "The Woman in Me." Twain and her producer-husband Robert (Mutt) Lange won for Song of the Year — "Whose Bed Have Your Boots Been Under."

A new survey finds that young people have been vaping less frequently since the COVID-19 pandemic began.

The survey, conducted by the Lung Association of Nova Scotia and Smoke-Free Nova Scotia, finds that respondents decreased vaping to five days per week from six, on average.

They also cut back to an average of 19 vaping episodes per day, down from 30.

The survey funded by Heart & Stroke also found the decrease in vaping frequency is most notable in British Columbia and Ontario.

The researchers say it may be related to warnings of potential complications from COVID-19 for e-cigarette users.

The survey heard from more than 1,800 respondents between 16 and 24 years old, and found most begin vaping at around the age of 15.

Actor Eugene Levy, one of the stars and co-creator's of the show, congratulated John Comerford and Lisa Parasyn on Twitter for winning the Emmy for Outstanding Casting For a Comedy Series.

"Schitt's Creek'' began on CBC, Pop TV and later Netflix before becoming a global phenomenon, with countless kudos for the story of the formerly wealthy Rose family adjusting to a humble life in a small town the dad once bought as a joke.

Levy's son Daniel, another star and a co-creator of the show, also gushed about the Emmy win, saying "I AM SCREAMINGGG," as he congratulated Comerford and Parasyn in a tweet.

RCMP have charged a man with dangerous driving after an officer pulled over a speeding Tesla on a central Alberta highway that appeared to be driving itself with no one inside.

Police received a complaint about a speeding car on July 9 near Ponoka, north of Red Deer.

"Sure enough, a short time later the Tesla goes by. The officer was sitting in the centre median and he too was like, 'Noooo,'" said RCMP Sgt. Darrin Turnbull.

"He couldn't see anybody in the vehicle."

He said the car was travelling over 140 km/h and both front seats were completely reclined and two people inside appeared to be asleep.

The 20-year-old driver from British Columbia was initially given a speeding ticket and a 24-hour licence suspension. After consultation with Crown prosecutors, the dangerous driving charge was added.

This report by The Canadian Press was first published Sept. 18, 2020

Inquiry into oil and gas foes to deliver report next year: Kenney
Oct 24, 2020 7:30 PM
Polling-station workers await voters after many cast early ballots during pandemic
Oct 24, 2020 7:15 PM
Chief of Neskantaga First Nation scales up evacuation amid tainted water crisis
Oct 24, 2020 6:50 PM
Comments
We welcome your feedback and encourage you to share your thoughts. We ask that you be respectful of others and their points of view, refrain from personal attacks and stay on topic. To learn about our commenting policies and how we moderate, please read our Community Guidelines.