'Not funny inside': Edmonton’s renovated, ridiculed library opens to the public

EDMONTON — Some Edmontonians who got a peek inside the city's new downtown library say it's what's inside that matters. The Stanley A. Milner Library opened its doors to the public Thursday, four years after closing for renovations.
Sep 17, 2020 8:23 PM By: Canadian Press 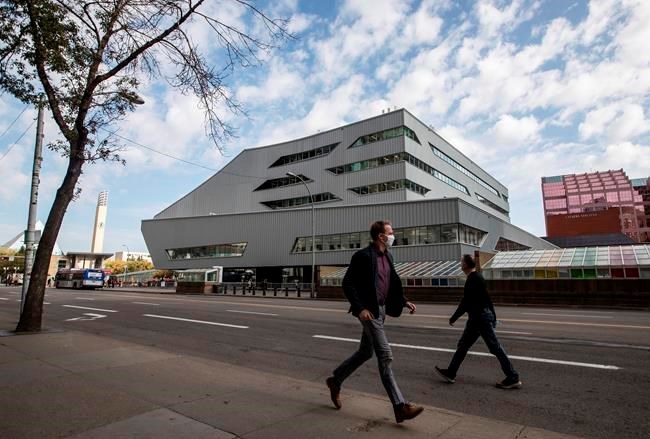 EDMONTON — Some Edmontonians who got a peek inside the city's new downtown library say it's what's inside that matters.

The Stanley A. Milner Library opened its doors to the public Thursday, four years after closing for renovations.

The building received criticism last year after people got a look at the new, modern angular structure that didn't quite match its blueprint, and online memes compared it to a military tank and even a dumpster.

Carmelita Ryan-Kelly, who went with her friends, was one of the first to tour the library after its doors opened.

"It may look funny outside, but it's not funny inside. It's state-of-the-art. I’ve never seen a library like that in my life," she said.

"Cannot wait to take my grandson."

Along with a two-storey interactive digital wall and a renovated children’s section, several people at the grand opening said they appreciate how much more spacious the new library is in comparison to the old one.

It also has 600 windows and a multi-storey interior atrium.

Justin Michael McLeod, a local musician, said he was particularly excited about the studio space the library has to offer.

In comparison to other libraries around the city, he said the downtown one is the best yet.

Tourist Karl Waskiewicz agreed that the building is only ugly on the outside.

"People will get used to that. But I think they will still enjoy and make a lot of use of what’s offered inside," he said.

During a morning celebration, an emotional Mayor Don Iveson said the moment was "special."

When construction began in January 2017, the city had estimated the renovated library would cost $69 million, but the project bill grew to about $85 million.

Tickets are sold out for 15-minute tours of the building until Sunday.

This report by The Canadian Press was first published Sept. 17, 2020.

Class-action lawsuit in investment case can go ahead, Supreme Court rules
Oct 30, 2020 11:31 AM
Comments
We welcome your feedback and encourage you to share your thoughts. We ask that you be respectful of others and their points of view, refrain from personal attacks and stay on topic. To learn about our commenting policies and how we moderate, please read our Community Guidelines.