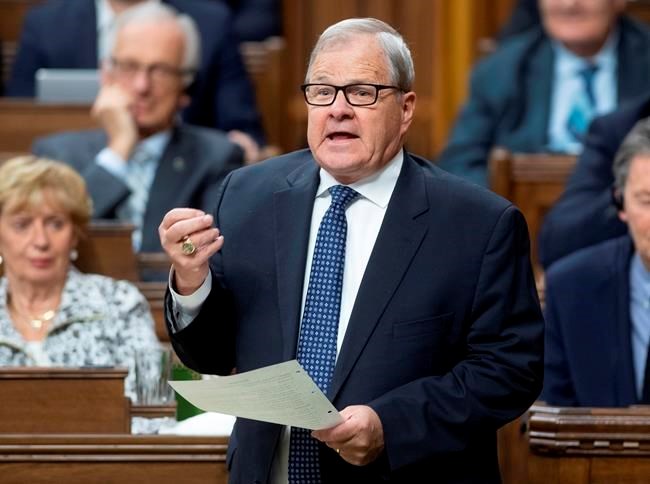 OTTAWA — The Liberal government is defending its decision to take more than $4.1 million from Veterans Affairs Canada's operating budget at a time when the department is struggling with a backlog of tens of thousands of disability applications from injured ex-soldiers.

Veterans Affairs Minister Lawrence MacAulay found himself under fire for the move during an appearance before a parliamentary committee on Tuesday, where he noted the reallocated funds went mainly to providing emergency help to veterans, and their families, who are considered especially at risk.

But the minister, who insisted eliminating the backlog of 44,000 applications for assistance from injured veterans is his top priority, later sidestepped questions about why the government didn't add more money to meet veterans' needs instead of taking funds from the department.

MacAulay pointed to the department's efforts to speed up the processing of applications through digitization and other internal changes even as he emphasized the billions in new benefits and services promised to veterans in recent years.

"The fact is we're doing everything to digitize the program, remove the paperwork," MacAulay told The Canadian Press. "What we want to do is make sure that we simplify the process, make it more efficient, and there's a large amount of money put into Veterans Affairs itself."

Yet while the department has significantly increased the number of requests for assistance it is approving, Natynczyk acknowledged it has not been able to keep up with the applications filed each year.

Nor could MacAulay or Natynczyk say when the backlog will be eliminated. Veterans ombudsman Craig Dalton last month called on the government to produce a detailed plan and timetable for dealing with the problem.

"It's pretty irresponsible to give figures on something," MacAulay told The Canadian Press when asked about Dalton's request. "We do not know what the applications will be."

Conservative and NDP MPs were unimpressed with the government's decision to take resources from the department's operating budget as the backlog grows and demanded to see a detailed plan to address the overall problem.

"I always hope that money is getting right out to the veterans who desperately need it," said NDP veterans-affairs critic Rachel Blaney. "But when we look at the depth of the backlog ... having those resources to address that should be more urgent in my opinion."

Conservative veterans-affairs critic Phil McColeman blasted the government and department for not having produced a detailed strategy for eliminating the backlog, including securing more resources, to ensure veterans receive the benefits and services they need in a timely manner.

"It's mismanagement," he said. "Why isn't someone who is doing the planning of solving the problem recognizing that funds are there for the resources that they need and aggressively going after getting those resources in place so that we can solve this backlog problem?"

This report by The Canadian Press was first published March 10, 2020.