Infrastructure announcement and Shawn Mendes: In The News for Oct. 1

In The News is a roundup of stories from The Canadian Press designed to kickstart your day. Here is what's on the radar of our editors for the morning of Oct. 1 ... What we are watching in Canada ...
Oct 1, 2020 9:16 AM By: Canadian Press 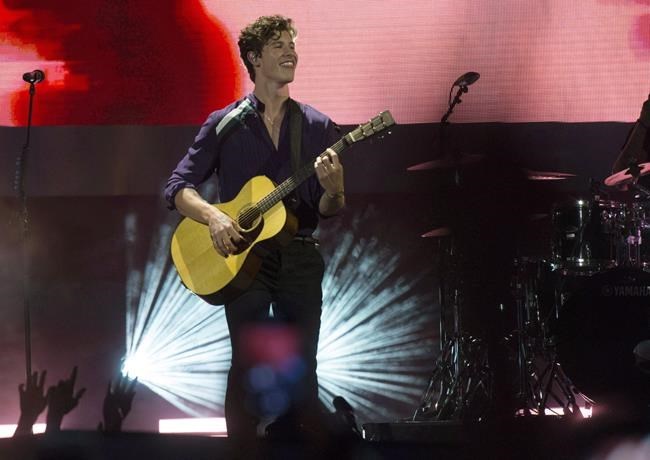 In The News is a roundup of stories from The Canadian Press designed to kickstart your day. Here is what's on the radar of our editors for the morning of Oct. 1 ...

What we are watching in Canada ...

Prime Minister Justin Trudeau will outline today how the Canada Infrastructure Bank intends to invest billions in projects aimed at creating jobs and contributing to the fight against climate change.

Government officials say no investments in specific projects are to be announced at a news conference today, where Trudeau is to be joined by the new chair of the bank's board, Michael Sabia, and Infrastructure Minister Catherine McKenna.

But the trio are expected to lay out the priority areas in which the bank intends to invest, as well as the amount of money it will devote to each area.

Among the priority areas are agricultural infrastructure in western Canada and broadband to expand access to high-speed internet service across the country.

Officials, who spoke on condition of anonymity because they were not authorized to publicly reveal details prior to the announcement, say the investment plan is part of the government's promise in last week's throne speech to create one million jobs and help revive an economy ravaged by the COVID-19 pandemic.

It is also intended to help the government meet its goal of net-zero carbon emissions by 2050.

A Toronto court is set to hear arguments today from a group of homeless men and women living in tents who are pushing back against attempts by the city to remove them from parks.

The group, which includes activist organizations, wants an interim order to allow homeless people to continue living in the encampments until a constitutional challenge of a city bylaw is heard.

The central issue is a bylaw that bans living or camping in parks after midnight.

The city says the Charter of Rights and Freedoms does not entitle the group to live in parks.

Since the pandemic began, hundreds of people have fled shelters out of fear of contracting COVID-19 and have been living outside.

NEW YORK - The presidential debate commission says it will soon adopt changes to its format to avoid a repeat of the disjointed first meeting between President Donald Trump and Democrat Joe Biden.

The commission said Wednesday that the debate "made clear that additional structure should be added to the format of the remaining debates to ensure a more orderly discussion of the issues."

One possibility being discussed is to give the moderator the ability to cut off the microphone of one of the debate participants while his opponent is talking, according to a person familiar with the deliberations who was not authorized to discuss the matter publicly and spoke on condition of anonymity.

The next presidential debate is a town hall format scheduled for Oct. 15 in Miami.

Meanwhile, the Nielsen company said that 73.1 million people watched the debate on television, where it was shown on 16 networks. That's more than any other television event since the Super Bowl, even if it fell short of the 84 million who watched the first debate between Trump and Hillary Clinton in 2016. That was the most-watched presidential debate ever.

Moderator Chris Wallace struggled to gain control of Tuesday's debate in Cleveland because of frequent interruptions, primarily by Trump. The candidates interrupted Wallace or their opponent 90 times in the 90-minute debate, 71 of them by Trump, according to an analysis by The Washington Post.

Wallace, of Fox News, pleaded for a more orderly debate, at one point looking at Trump and saying, "the country would be better served if we allowed both people to speak with fewer interruptions. I'm appealing to you, sir, to do that."

"Well, frankly, you've been doing more interrupting than he has," Wallace said.

Biden on Wednesday called the debate "a national embarrassment." But despite some suggestions that the final two presidential encounters be cancelled, both campaigns said they expected their candidate to attend.

Trump campaign communications director Tim Murtaugh said the commission was "only doing this because their guy got pummelled last night. President Trump was the dominant force and now Joe Biden is trying to work the refs."

What we are watching in the rest of the world ...

ROME - Cardinal George Pell, who left the Vatican in 2017 to face child sexual abuse charges in Australia, returned to Rome on Wednesday to find a Holy See mired in the type of corruption scandal he worked to expose and clean up.

The 79-year-old Pell arrived at Rome's Leonardo da Vinci airport on a flight from Sydney wearing a blue surgical mask. He waved briefly to reporters before getting into a waiting car without making any comments.

The trip is his first back to Rome after he took a leave of absence as Pope Francis' finance czar in 2017 to face historic sexual abuse charges stemming from his time as the archbishop of Melbourne. After he was absolved by Australia's High Court in April, Pell said he wanted to return to Rome to clean out his Vatican apartment, but intended to make Sydney his home.

It wasn't immediately clear how long Pell would remain in the Vatican or what his agenda might involve. The Vatican didn't immediately say if he would meet with Francis. The pope never turned on Pell throughout the Australian court proceedings, keeping his job vacant for two years so as to not prejudge the outcome.

Pell arrived the same day that European anti-money laundering evaluators began a periodic visit to the Vatican. They, too, found a mounting financial scandal in the tiny city-state that already has cost a half-dozen people their jobs, including one of the Holy See's most powerful cardinals, Angelo Becciu.

Pell and Becciu had long clashed over the Australian's efforts to bring greater transparency and accountability to the Vatican's balance sheets.

The Council of Europe's Moneyval team will be checking the Vatican's compliance with international norms to fight money laundering and terror financing.

Shawn Mendes has locked in a date for "Wonder," the title of his new single and upcoming fourth studio album.

The pop singer from Pickering, Ont.  has unveiled the early details of the next chapter in his music career, sharing a fantastical promotional trailer.

The cinematic scene opens as the camera drifts into an apartment and past a newspaper with a headline that reads: "Famous Musician Gone Missing."

Moving across the room, it eventually meets with Mendes, who's laying on his back on a mattress on the floor, playing a sombre song on a piano behind him.

Mendes gets off the floor and cracks open a window, which splashes light and seemingly reveals an entirely new world.

The clip closes out with the Friday release date for the "Wonder" single, and the full album marked for Dec. 4.

Not all heroes wear capes, as the saying goes, but Teara Fraser does have her wings and likes to fly -- with a social purpose.

Author Laurie Halse Anderson edited "the anthology of Wonder Women," which has different writers and illustrators for each profile.

This report by The Canadian Press was first published Oct. 1, 2020

Inquiry into oil and gas foes to deliver report next year: Kenney
Oct 24, 2020 7:30 PM
Polling-station workers await voters after many cast early ballots during pandemic
Oct 24, 2020 7:15 PM
Chief of Neskantaga First Nation scales up evacuation amid tainted water crisis
Oct 24, 2020 6:50 PM
Comments
We welcome your feedback and encourage you to share your thoughts. We ask that you be respectful of others and their points of view, refrain from personal attacks and stay on topic. To learn about our commenting policies and how we moderate, please read our Community Guidelines.